Dr. Seiya Ohata Has Been a Good Son, a Good Doctor, a Good Veteran 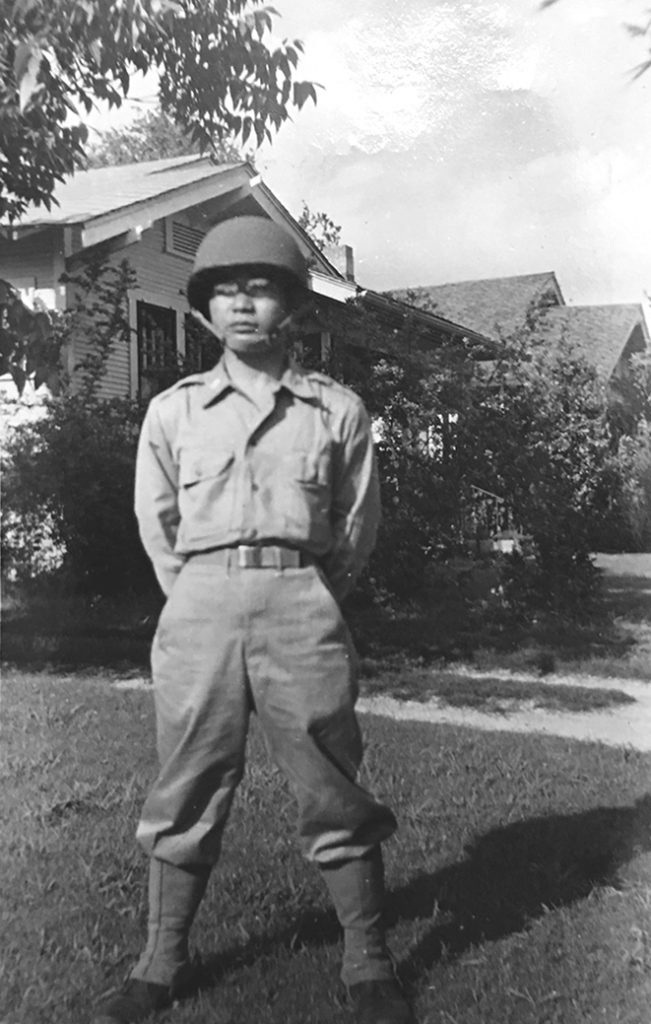 As Seiichi Ohata and his family enjoyed Sunday morning breakfast at their home in the sugar plantation town of Pä‘ia, little did they know that Japanese planes had just decimated the U.S. Navy’s Pacific fleet home-based at Pearl Harbor on the island of Oahu. With that, America was drawn into World War II.

“Before he could even finish his meal, the police were at the doorstep,” recalled Dr. Seiya Ohata of his father. The elder Ohata was dragged off to the Wailuku prison and, over the course of the next few years, sent to military jails throughout the continental U.S.

It was the beginning of a tumultuous period that would separate the Ohata family — father in jail, mother on Maui, a brother in the Japanese army and Seiya Ohata serving in the European theater. Ohata would spend the war fighting for America, and the years after that, fighting for his land and his father.

Ohata recently celebrated his 100th birthday. Sharp as ever, the retired physician sips a cup of coffee in the Kahului Wendy’s as he pulls up decades-old details — the height and weight of his college roommate, the hours he worked as a telephone switchboard operator, his monthly salary as a medical intern in the 1940s.

Born in Lahaina on June 7, 1917, Ohata’s earliest memories go back to a “carefree” childhood spent on the north shore of Maui, where he grew up with his seven brothers and sisters.

“Nothing to worry about,” he recalled. “We’d get up in the morning during the summer months. We didn’t have any clothes. We just jumped into our swimming trunks and went straight to the beach.”

Ohata’s father, Seiichi, a physician, hailed from Shizuoka, Japan, while his mother, Hisa Nishio, was a college teacher from Kyöto. The couple married in Japan and moved to O‘ahu in 1912 to fill a need for Japanese-speaking doctors for Hawai‘i’s immigrant population.

In 1922, after the family settled on Maui, Ohata’s father purchased about two acres of land in Pä‘ia to build a hospital.

Ohata graduated from the old Maui High in Hämäkuapoko in 1935 and then ventured across the Pacific Ocean to attend college at the University of Dayton in Ohio in 1939. He was a student at the St. Louis School of Medicine in Missouri when the war broke out. Ohata said he learned of his father’s fate from his sister.

As a doctor in a small plantation community, Ohata’s father naturally became a leader. As president of the Maui Japanese Community Association, he entertained visiting dignitaries from Japan. For this reason he was arrested and shuttled between military jails in California, Kansas and Montana before finally being sent to Japan.

“It was rough for us because he was our sole provider,” said Ohata, who picked up a night shift job as a telephone switchboard operator. “We all had to go to work to finish school.”

As a Nisei in Missouri, Ohata said he “was scared to death” of retaliatory attacks because of his Asian face. He told people he was Filipino and wouldn’t leave home unless it was absolutely necessary. Fortunately for him, his roommate was a hulking 6-foot-2-inch, 275-pound football player named David Dwight Oaks, whose father, likewise, was a doctor. Oaks and Ohata became fast friends, and Oaks made sure no one bothered Ohata when they were out.

After graduating from medical school in 1943, Ohata found even greater protection when he enlisted in the U.S. Army Medical Corps.

After graduating from medical school in 1943, Ohata found even greater protection when he enlisted in the U.S. Army Medical Corps.

Lives on the Line

Ohata tried four times to get into the Army. At 4 feet, 11 3/4 inches tall and 107 pounds, military officials said he was too small. He applied while in medical school and was denied three times. But with the war in full swing and “the Hawai‘i boys” proving themselves in Italy, the military loosened its requirements and Ohata was allowed to enlist.

“Once I got into the Army and had the military uniform . . . I was not afraid to go anyplace,” he said. “It was a ticket to safety.”

Assigned to the 164th Combat Field Hospital, Ohata’s first overseas deployment landed him on the beaches of Normandy during the Allied forces’ D-Day invasion. On June 6, 1944, he disembarked a landing craft in the waters off northern France. While the waves lapped at the knees of his taller comrades, Ohata sloshed through waist-deep water, his backpack perched atop his head.

By the time they reached the shore, advancing troops had pushed the German forces back far enough that the beach was clear for the Army Corps of Engineers to set up a hospital tent. Still wary of land mines and small arms fire, medics began to treat the wounded.

“Casualties were high,” Ohata remembered. “We really worked like dogs.”

Ohata was one of the few Japanese Americans who stormed the beach that day. During World War II, most Nisei were fighting in France and Italy. Ohata doesn’t regret not having been part of Japanese American 100th Infantry Battalion or the 442nd Regimental Combat Team. He knew he “was not a gun-toting” soldier and says healing on the battlefield was more his calling.

“My job was to save lives, whether they were friends or foes,” Ohata said.

One such foe was the young German soldier, barely 15 or 16, that Ohata treated while in Germany. The boy had been shot in the knee and had a 2×4 strapped to his blackened, swollen leg.

In the spring of 1945, Ohata received orders to join a combat unit at the front lines. His medical battalion would be attached to an infantry division in Gen. George Patton’s Third Army. Ohata thought, “This is it. I don’t know what’s going to happen.”

In May 1945, just outside of Pilsen, Czechoslovakia, Ohata’s outfit was waiting for orders to attack when they were instead ordered to cease fire.

“It was the best news in the world,” he said. “No more fighting, no more killing. The European war was over. . . . Pilsen is a beer city. I don’t drink, but everybody else, they celebrated.”

Ohata was granted a 30-day leave and began the long journey back to Maui.

“When I got home, my mother looked at me like she’s seen a ghost,” Ohata recalled. “When she realized I was for real, she burst into tears. She was so happy to see me. I’ll never forget that. My mother is a very stoic woman. All throughout my life, I’ve never seen my mother shed tears for anything. But that was the first time.”

When his mother fell ill after the war, Ohata came home for good. Her tumor proved benign, but Ohata decided to remain on Maui, practicing medicine out of his father’s office. In the early years after the war, there were only about 15 doctors in Maui County, Ohata remembered. So, as a general practitioner, Ohata “did everything, from soup to nuts.” He delivered babies, performed surgeries, and offered pediatric and orthopedic care.

“Any kind of problem that came up, we had to do everything,” he said. “There were no specialists at all.”

Throughout those years, Ohata was still trying to reunite his family, who had been separated since December 1941. The federal government had frozen all of his father’s assets and had subsequently seized his land. Ohata took the government to court and won back his family’s rights. Now, the last thing he needed was to bring his father home.

Before being sent to Japan as an exchange prisoner of war, Seiichi Ohata had written to his son Seiya in late November 1943, asking him to send him some clothes. He had enclosed a photo of himself dressed in shabby garments, his beard long and white, the toothbrush in his hand the only item to his name.

As an intern at St. Mary’s Hospital in Missouri, Ohata earned $15 a month. But he was able to scrounge up the money to buy his father several suits, half a dozen shirts, shoes and more.

“He went back to Japan a well-dressed man,” Ohata said. “From that day on, I lost complete contact.”

After the war, determined to bring his father home, Ohata sought the assistance of the territory of Hawai‘i’s congressional delegate, Joseph Rider Farrington (son of Hawai‘i territorial governor, Wallace Rider Farrington). Finally, in May 1955, Ohata realized his dream.

“When he walked off the plane, that’s the second time I saw tears in my mother’s eyes,” Ohata recalled.

He said he never heard much about his father’s time in Japan. All he knew was that the Japanese government sent his father to work in a village that had no doctors. Despite his incarceration and despite a war that had split his sons into opposing armies, the elder Ohata never held a grudge.

“I think he suffered more than any one of us,” Ohata said. “But he used to say, ‘Don’t blame the United States. It’s war. Shöganai. Cannot help it.’ Dad never was bitter about that.”

For 10 years, Seiya Ohata operated a solo practice in Pä‘ia. In January 1961, he joined six other physicians in opening Maui Medical Group, a partnership they hoped would bring better medical care to the island. Ohata worked there until 1985, when he “was so doggone tired” that he finally laid aside his stethoscope.

The doctor will tell you he never expected to live to 100. He’s just happy he escaped injury in Europe and came home “all in one piece.” As a medic, Ohata’s war experiences were different from many of the other Nisei who served. While he’s never had problems connecting with other veterans, he’s mostly preferred not to discuss the war with anyone “unless they specifically ask me.”

At 100, Ohata still drives a car. “God forbid they take away my license!” he said. Married, divorced and remarried, he has three daughters, seven grandchildren and seven great-grandchildren, all of whom live on Maui. His wife Kiyoko passed away in April 2016 at the age of 83.

Recently, about 130 family members and friends gathered at the King Kamehameha Golf Course in Waikapü to celebrate the centenarian’s long life.

“It cost me plenty money,” Ohata said with a twinkle in his eye. “But it’s a once in a lifetime thing.”