Summertime in Japan is synonymous with Obon, the time of the year when the spirits of deceased family members, ancestors and other loved ones return to the world of the living. In Japan, millions of Japanese are on the move during the summer months, returning to their ancestral homes to go ohakamairi (visiting family graves). In Hawai‘i, Obon starts in early June and runs through late August, with each Buddhist temple having its own Obon prayer service and Obon odori, or Obon dance.

Obon odori is danced with joy and happiness to remember and express gratitude to the ancestors and relatives for their sacrifices and dedication to the family lineage. In Japan as well as in Hawai‘i, family gravestones are cleaned and decorated with flowers. Osenko (incense sticks) and food offerings are placed at the graves and prayers are offered for the peaceful repose of the ancestors’ spirits. At some temples, paper lanterns are set afloat down rivers, in lakes or out to sea at the end of the Obon season to guide the spirits back to their world.

On the last Saturday in May, I stood in the middle of a cemetery of hardened red soil surrounded by dry haole koa trees just a few miles makai of what was once a thriving camp called Kawailoa above Hale‘iwa, wondering how I could best describe my emotions.

As the rain softly drizzles in the early morning, like tears of sadness

and remembrance of a time long ago of hardship and

sacrifices made by the Issei,

Graves of Issei, like weather-beaten stones in an ancient Japanese garden

in the high hills of Arashiyama,

lonely, but not forgotten, are

with filial piety etched in their hearts.

After they are gone, who then will carry on this benevolent act of

expressing eternal gratitude to their ancestors?

In Japan, it is customary and the social practice for an adult in the family to be designated the hakamori, the person responsible for the maintenance and upkeep of the family grave. The hakamori duties usually fall to the chönan, the first-born son, and if there are no sons, the chöjo, the eldest daughter. It’s sad if there is no surviving child or relative in the family. In such situations, it is said that the spirit is a muenbotoke, a deceased person who has no one to pray for him or her. It is a grave without a hakamori.

When I was in high school, my mother learned that one of the elderly women in the neighborhood was slowly slipping from consciousness. She was a widow with no children and no known relatives. Like my mother’s family, this woman’s family had emigrated from Fukushima ken (prefecture).

One evening, just before dinnertime, as Hilo quieted down for the night, my mother said she was going to see her Fukushima ken friend at Hilo Memorial Hospital. “Ma, why are you going to see her?” I asked. “She’s dying.”

“Nobody should die alone,” my mother replied. “When you are dying, it is the loneliest time for all people, especially if someone you know is not there. I will tell Mrs. Sakamoto (a fictitious name) that even after she dies, I will go to her grave and put up flowers for her. If she knows that, she can go peacefully.”

In many silent and remote corners of Hawai‘i, there are cemeteries where the graves of Issei are hardly cared for, because many of them who immigrated to Hawai‘i never married and left no descendants behind. One such cemetery is in the shadow of a high red cinder cone in Kapoho on the Big Island, where lava once flowed to the sea. There is a structure, about 20 or 30 feet high, whose purpose is to act as a lighthouse near Kumukahi. This lighthouse is, in many ways, mystical or spiritual and makes you believe in the Hawaiian goddess, Pele, because the lava flowed around the lighthouse, missing it by mere inches. It is said that the lighthouse survived destruction for the simple reason that it saved people at sea and on ships in the turbulent waters off of Puna. It is a wondrous sight to behold.

There are a few flowers and burnt osenko at some of the graves in the Kapoho cemetery. There is usually no sign that the other graves have been cared for by anyone. How lonely the muenbotoke must be in the dark of night, when only the sound of rustling leaves can be heard.

My parents are buried at ‘Alae Cemetery, located just outside of Hilo town. After my mother died, my father would go to ohakamairi at her grave. I would see him also pouring water over the gravestones of surrounding graves that had fallen off their cement base. He would say quietly, “Hontöni sabishii deshö. Dare mo inai de.” (Really, how sad it is. They have no one.) In a way, my father was like a hakamori — he cared for those forgotten graves and did his best to appease the wandering souls of the muenbotoke.

On that May 28, members of several Buddhist temples in Wahiawä and Hale‘iwa performed ohaka souji of cemeteries in Kemo‘o, Pu‘uiki, and lower and upper Kawailoa. Large corporations own the surrounding lands, so access to these areas is now restricted.

The Rev. Taiken Akiyama of Haleiwa Shingon Mission invited me to join the group, which included volunteers from Wahiawa Soto Mission, Wahiawa Hongwanji and Haleiwa Jodo Mission. They clean the cemeteries at least once a year, before Obon.

Two men in the group, Michael Miura and Dwight Ishiguro, clean and maintain these cemeteries on a weekly basis. Sometimes they are out working three times a week.

Ishiguro has been cleaning the graves since 1999. He does it out of “a sense of community.” Miura said he devotes his time and energy to the effort “. . . maybe because Buddhism is a benevolent religion. I don’t know what’s going to happen after all these kind people pass away. I wonder if the young people will have the same kind of feeling of obligation to their ancestors and relatives.”

The cemetery at Pu‘uiki overlooks the ocean nearby. It was started by Waialua Sugar Plantation for its workers. It’s spacious and is the final resting place of people of many races, ethnicities and religions.

The most visible landmark in the cemetery is an eight- to 10-foot-high memorial with inscriptions written in Korean. In 2003, the local Korean Chamber of Commerce began helping to clean and maintain the cemetery. Historically, most of the Korean immigrants settled first in Waialua, where they worked in the sugar fields. Many of them were highly educated and, as soon as they could, began moving into the city. My good attorney friends, Andrew Lee and Tany Hong, have roots in Waialua. From humble beginnings, Tany Hong rose to become Hawai‘i’s attorney general. Besides Japanese and Korean graves, there are many graves with Christian markings, most likely belonging to Portuguese and Filipino workers.

The Buddhist temples initially cleaned only the Japanese gravesites at the Kemo‘o cemetery. The Rev. Kojun Hashimoto of Wahiawa Hongwanji then suggested, “We should be good neighbors and clean the entire cemetery, even the Catholic graves.” Today, without even a second thought, the members of the Buddhist temples clean the entire cemetery, waging an unending war against invasive haole koa trees and hardy weeds.

At the Kawailoa cemetery, Akiyama-Sensei explained the inscription written on the tall monument standing in the middle of the rock-filled cemetery. The kanji read: “Sangai Banrei” — “The three spiritual worlds.” In the old days, he said, most graves were marked with wooden stakes. With the passage of time and inclement weather, the stakes deteriorated and no longer exist. “There are probably graves underneath the ground we are standing on,” he said.

It seemed disrespectful to be standing atop the unmarked graves of unknown people. There is no record or symbol of any kind that a person once lived — just bones several feet below our feet. But at one point in time, these bones were a living person with hopes, dreams and desires like any other human being. At Obon, when the spirit of that deceased person returns briefly after a year of wandering as a muenbotoke and there is no one to commemorate his returning presence, how happy and thankful the spirit will be for the kind strangers who took the time to clean the grounds where his gravesite existed long ago.

In the years to come, when the spirits of our ancestors and relatives return for Obon, what will the condition of the Buddhist cemeteries be like? Will there still be Buddhist temples? Will there be people to tend to the graves with loving care so that the spirits can return joyfully, their voices in the wind whispering gratitude to people, some even strangers, who came to ohaka souji?

Roy Kodani is a Sansei attorney in Honolulu. He was born and raised in Hilo. 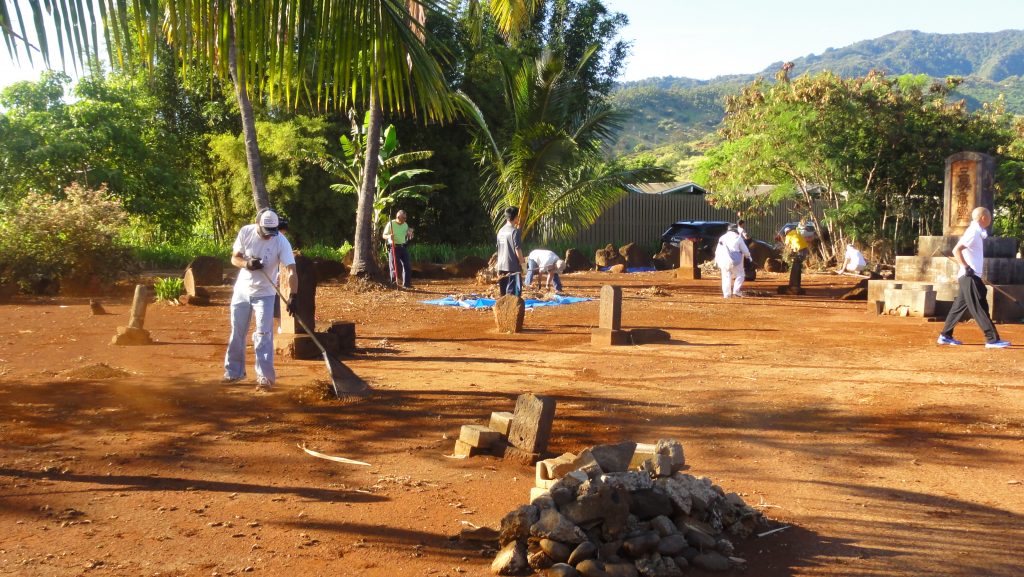