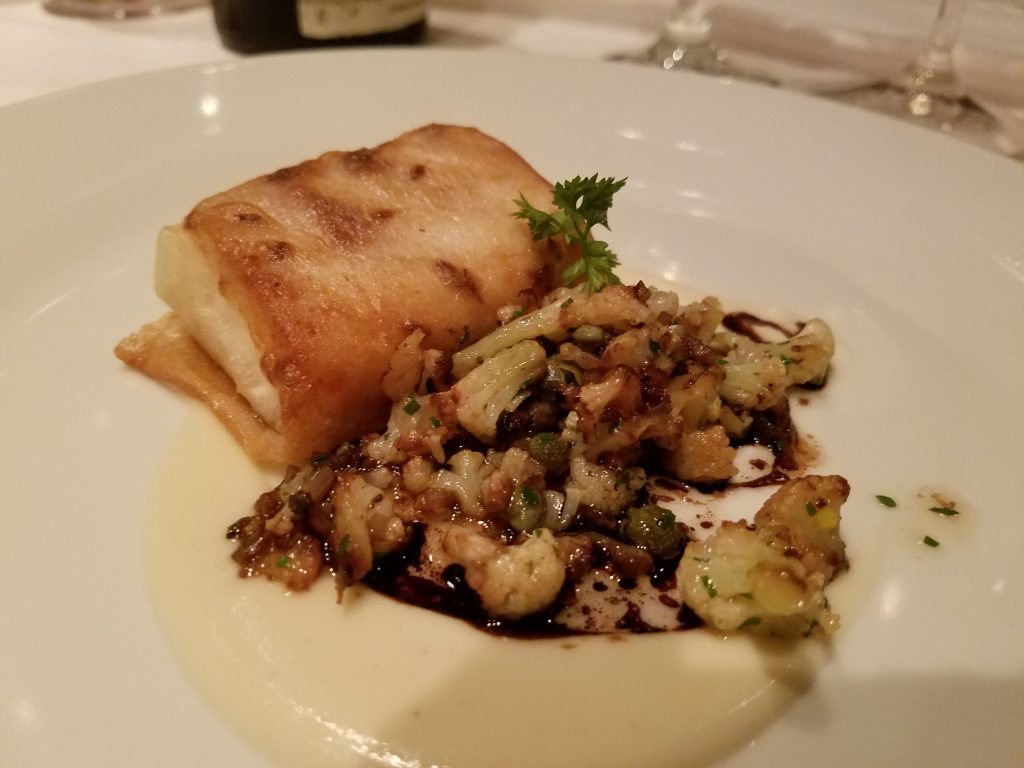 Spring is in the air . . . especially at Chef Mavro, the eponymous restaurant operated by Chef George Mavrothalassitis for the past 19 years. And, once again to welcome the arrival of spring, Chef Mavro recently hosted his biannual dinner for generous, regular supporters of Hawai‘i Public Radio. While I donate to HPR (and PBS Hawai‘i) every year, my annual contribution certainly doesn’t merit an invitation to these dinners. But having friends like Carol and Edmund Kellett, who donate the wines served at these dinners, does garner an invitation to these feasts. 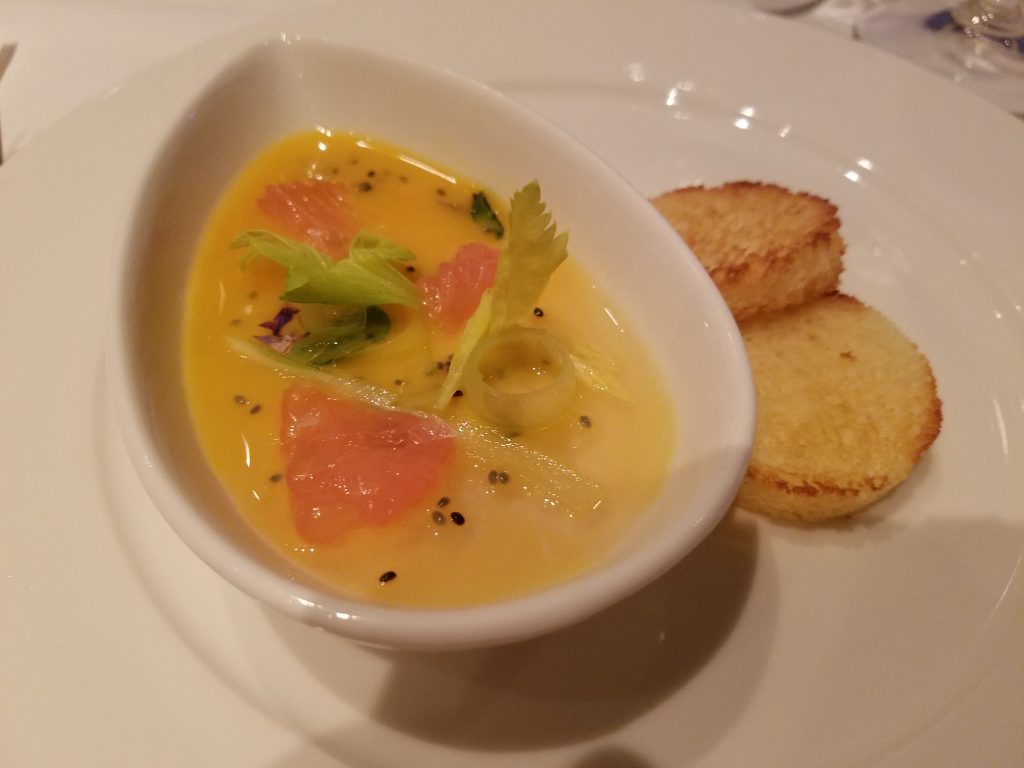 Chef Mavro’s father was Greek and his mother was Italian. Both of them relocated to France early in their childhoods, however. Their son, George Mavrothalassitis, was born and raised in the southern France port city of Marseille, the capital of Provence. After training with the Troisgros brothers, Gerard Vie and Alain Senderens, Chef Mavro operated his own restaurants in Marseille and Cassis until moving to Hawai‘i nearly 30 years ago to work at La Mer in the Halekulani and, later, the Four Seasons Resorts. In Chef Mavro’s view, the port of Marseille and Hawai‘i shared many similarities. He recalls his first morning in Hawai‘i and inhaling the view from Waikïkï Beach to Diamond Head and saying to himself, “That’s it! I’m home!”

Ten years later, Chef Mavro opened his own restaurant, which has garnered a number of accolades, including being the only restaurant in the 50th with a Gayot Three Toques 18/20 rating; AAA Five Diamond Award every year since 2008; and a James Beard Award, along with numerous Top 10 ratings in various food and wine publications.

The Mrs. and I have enjoyed several meals at Chef Mavro, but we usually get just a glimpse of Chef Mavro popping in and out of the kitchen. When he hosts the HPR dinners, however, he enthusiastically describes each dish — sometimes with unintended humor due in part to his difficulty translating French to English, but mostly because of his very thick French accent. Actually, I think his French accent is getting worse the longer he remains in the 50th.

On this evening, dinner began with a champagne reception, followed by the appetizer, fish course, main course, cheese course, then dessert and mignardises (bite-sized sweets). Here’s what the menu looked like:

simmered in cognac and red wine

The foie gras (fattened duck liver) parfait was light like a mousse, although it was still packed with the richness of pan-seared foie gras with a balancing acidity from the lilikoi (passion fruit) gelee that topped the dish. I would have served it with a Sauternes (French dessert wine), which is the classic wine pairing. Chef Mavro explained that in Provence, the fish course would have been made with skate (stingray), but since it would have been difficult breaking down a manta ray in his kitchen, he selected local onaga (long-tail red snapper) instead. It was my favorite dish of the evening, as the crispy, filo-like wrapper provided a nice textural contrast to the soft flesh of the onaga. The dish was balanced with the herb butter sauce and the rich cauliflower side. The chablis paired with the foie gras would have been a much better pairing with the fish course.

Chef Mavro then explained that no chef in his right mind would serve coq au vin (rooster cooked in red wine and cognac) because the rooster, which is traditionally used, is very tough — you have to marinate it for a whole day, then braise it for at least five hours and finally serve it on the third day. The red burgundy served with this dish worked because red burgundy or French Pinot Noir is the wine traditionally used to cook the bird. The cheese course was another favorite because the goat cheese was almost like a firm mousse with sweet and sour strains from the strawberry jam. To prepare this dish, Chef Mavro explained that he simply tosses fresh strawberries into a smoking-hot cast iron pan, immediately creating a jam, along with hints of heat from the green peppercorn.

I’m not really into sweets, so my favorite “sweet course” was the pre-dessert palate cleanser of local watermelon rounds in a champagne gelee, which Chef Mavro normally serves before dessert on his pre-fixe menus.

The 2017 “Springtime in Provence” dinner is now in the books with “Christmastime in Provence” in the works for later this year. As the number of HPR sustaining members — those members who arrange automatic monthly electronic contributions — continues to grow, many more early invitations will be going out. Or, you can listen to HPR during its semiannual fund drives where a donation of a certain amount could earn you a seat at the Chef Mavro’s Christmas table. Better yet, just book a table at Chef Mavro. 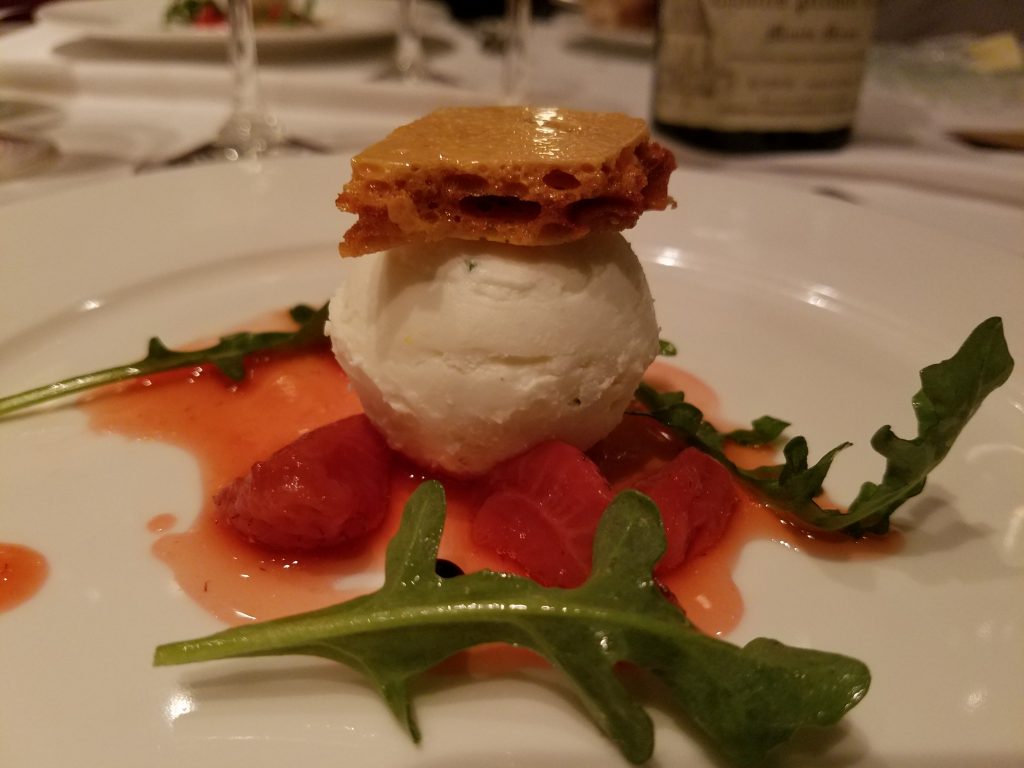