Newly Released Book Celebrates the Families and Landmarks of Käne‘ohe 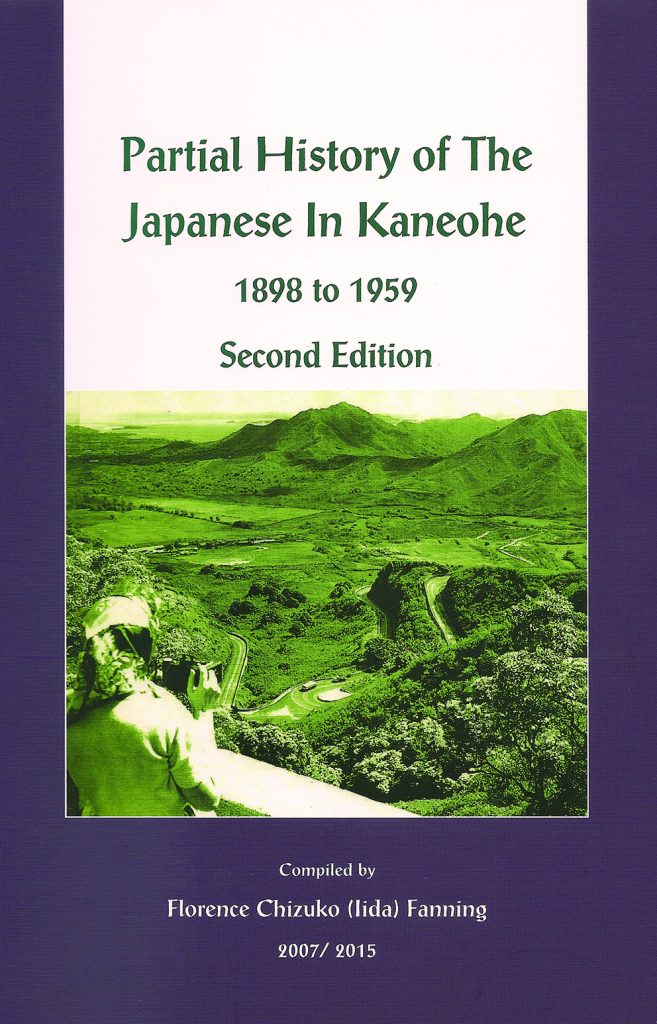 Memories of the earliest Japanese families who settled in Käne‘ohe in Windward O‘ahu have been preserved for succeeding generations in the newly released second edition of “Partial History of the Japanese in Kaneohe, 1898 to 1959.”

The new edition contains 39 new family histories. The first edition was published in 2007. The 256-page second edition is organized in alphabetical order by surname and, for the most part, was written by a member of each featured family in their style of choice — some as full narratives, others as bullet points. The volume also includes historical notes on Käne‘ohe and some of its long-gone institutions and landmarks, black and white historical photographs, and maps of the layout of Käne‘ohe town in 1945 . . . and in 2015. The changes are impressive. There’s also a bonus: All of the histories that were in the first edition are also included in the second edition, bringing the total number of family histories to approximately 65.

The book was produced as a labor of love to the community by four long-time Käne‘ohe residents: retired teachers Florence “Flo” (Iida) Fanning and her husband Harold (“Harry”), retired neurologist and former Hawai‘i Herald sports columnist Dr. Michael Okihiro and contractor (and Flo’s brother) Henry Iida. Flo Fanning contacted most of the families, many of whom she knew personally, and asked them to write their memoirs. She copy-edited the stories with the goal of retaining the flavor and style of each storyteller. Harry compiled a general history of Käne‘ohe and gathered photographs. Mike compiled a Käne‘ohe timeline that dates all the way back to the 1700s. Among the highlights in Mike’s timeline are the opening of Heeia Japanese School in 1908; widening and paving of Old Pali Road in 1921, thus enabling trucks to transport produce to Honolulu; opening of Luluku Japanese School in 1922; building of the original Kaneohe Higashi Hongwanji in 1924; introduction of Samoan crabs to Käne‘ohe Bay in 1926; building of the Territorial Hospital for the Mentally Ill (today’s Hawai‘i State Hospital); start of construction of the two Pali Highway tunnels in 1956 and their completion the next year; and the completion of the Likelike Highway and Wilson Tunnel.

Masaru “Mike” Okihiro was a major contributor to the book, writing not only his own family’s stories, but recording the oral histories of others and writing articles about Japanese internees from Käne‘ohe, the Käne‘ohe World War II Monument and the Windward O‘ahu Japanese Baseball League. He had previously collected oral histories for the Japanese Cultural Center of Hawai‘i.

The fourth member of the team — Flo’s brother, Henry “Hank” Iida — underwrote the publication of both editions. He died in February, just two months after the arrival of the 3,000 books from the printer.

What the book doesn’t say about the Fannings, Iidas and Okihiro is as fascinating as what is in the book. For example, Flo’s parents — the late Tomitaro and Shizuyo Iida, who had eight children — named Flo after Florence Nightingale because they wanted her to become a nurse. As it turned out, Flo’s older sister Grace (Kumabe) became the nurse and Flo became a teacher. After graduating from Benjamin Parker School (no Castle High School back then), she earned her bachelor’s degree at Colorado State College of Education (today known as the University of Northern Colorado) and then her master’s in education from the University of Arizona in 1955.

Flo and Harry met as students at the University of Arizona. Back then, she said, it was against the law in many states, including Arizona, for a Caucasian and a “Mongoloid” to marry, so they got married in New Mexico in 1954. At first, their parents didn’t want them to marry outside of their own race, but they eventually accepted the couple when they decided to settle in Hawai‘i as husband and wife. Harry eventually returned to school to become a teacher. They were both hired as teachers at Castle High School in Käne‘ohe in 1969 — Flo taught English and Harry taught social studies and then economics. The couple retired in 1988.

Mike was always interested in medicine, but there weren’t any doctors in Käne‘ohe. After graduating from Mid-Pacific Institute and earning his medical degree from the University of Michigan, he became the first neurologist to practice in Hawai‘i in 1961, working for Straub Clinic & Hospital in Honolulu because he could not get an $11,000 bank loan to open his own practice. In 1980, he established his own practice, Neurology Associates, and eventually took on a young partner, Dr. Melvin Yee, who had “interned” with Mike from the time he was a student at Punahou School. When Mike retired in 1992 at age 65, Yee took over the practice and expanded it.

In the new edition, Mike wrote about his issei father, Keiichi Okihiro, who was a fisherman. However, he didn’t include the fact that his father was a talented woodcarver and stone sculptor who created many sophisticated art pieces. Mike published a small book about his father titled, “Keiichi Okihiro and His Carvings.” It contained professionally shot photographs of his father’s wood and stone works, mostly Buddhas and Hawaiian maidens. They are displayed in his Käne‘ohe home, where he and his wife Evelyn have lived since 1965.

Since retiring, Mike has written several books about the Japanese in Hawai‘i. In 1999, the self-professed “baseball nut” authored, “AJA Baseball in Hawaii: Ethnic Pride and Tradition.” In 2003, he wrote, “A‘ala: The Story of a Japanese Community in Hawaii.” Both resulted from research he conducted for gallery displays as a JCCH volunteer.

Mike also wrote the book, “Coach Manju Nitta’s Baseball Secrets,” in 2011. He played baseball for community leagues in Käne‘ohe and then while in the Army, stationed at Schofield Barracks. He also played summers while on the Mainland attending medical school and played softball while doing his residency at the Mayo Clinic. Now 90, he no longer plays, but remains close to the game as manager for the MGI (Mililani Group Inc.) team in the Makule League for players age 60 and older.

In his life, Henry Iida gave much to Käne‘ohe. He led T. Iida Contracting Inc., which was started by his father, Tomitaro, who had emigrated from Shimane Prefecture. T. Iida built much of Käne‘ohe: the Kaneohe Higashi Hongwanji Mission, Calvary Episcopal Church, St. Mark Lutheran Church, as well as other O‘ahu churches, schools and government buildings. Henry and his three brothers were all involved in the business.

In 2009, Hank published “Asaji Iida Family,” a book about and for his extended family in Hawai‘i, the U.S. mainland, Japan and Brazil. It features family photos and a poster-size chart of his family tree, which, by then, included, besides Japanese, Caucasians, Hawaiians and Portuguese. Parts of his book were translated into Japanese.

The Fannings said that many who received a copy of “Japanese in Kaneohe” say it is “a treasure.” With many of Käne‘ohe’s old-timers suffering from aging-related ailments, time was of the essence in capturing their memories and documenting their stories for history and their families.

The second edition, like the first, is being distributed free of charge. A note inside the book suggests that the recipient make a monetary donation to Castle Alumni/Community Association, which raises funds for Castle High School, King Intermediate School and eight elementary schools in the Käne‘ohe area. Hank, who graduated from Castle High in 1953, founded the nonprofit, tax-exempt organization and served as its president.

Lorraine Oda is a freelance writer who was a full-time Hawai‘i Herald staffer from 1982 to 1984.