The I. Kitagawa and Co. Story is All About Perseverance in the Face of Adversity

People unfamiliar with Big Island history might not know that I. Kitagawa and Co. is one of the island’s largest and most successful businesses with $90 million in sales and some 200 employees. But why wouldn’t the name of one of Hawaii Business magazine’s Top 250 companies (87th in 2016 and perennially in the Top 10 amongst neighbor island businesses) be more widely recognized by everyone?

Old-time Hiloans, on the other hand, still refer to the state’s longest-running automobile dealership’s corporate headquarters on Kawili Street as “Kitagawa’s,” no matter what the sign out front might say. And, once inside the spacious complex, customers will indeed find the company’s four-generation legacy respectfully displayed and cared for by its current president, Brian Kitagawa, great-grandson of founder Isojiro Kitagawa.

According to Brian, Isojiro first arrived in Hawai‘i from Hiroshima in 1903 to work on the sugar plantation. He did not last a day, however, and returned to Japan. When he decided to come back to Hilo in 1905, Isojiro quickly proved that what he may have lacked as a field laborer was far exceeded by his skills as an entrepreneur.

Isojiro started by opening a fish market, which he expanded to carry fishing supplies such as line, rope, nets . . . and even groceries. Isojiro’s active involvement with other businessmen of the time eventually led to the formation of Suisan and Hawaii Planing Mill (HPM), two other long-standing and influential Big Island businesses.

Isojiro was a visionary and foresaw the future of gasoline-powered engines that were bound to transform the local fishing fleet. In 1908, he became a supplier of gas and oil, and eventually added engine parts and repair services to his growing enterprise. In 1913, he opened a service station and later expanded that business to include auto parts and tires.

Although many would be satisfied with this success, the intrepid Isojiro was just getting started and boldly ventured into the brave new world of gasoline-powered automobiles. Although he spoke no English, he managed to conduct business with American companies with the help of an interpreter.

I. Kitagawa’s first shipment of five vehicles arrived in 1915 and included three Argos, one Metz and one Crow-Elkhart. Along with his line of Diamond T trucks, the vehicles proved to be a big hit, and sales later grew to include such makes as Durant, Star, Flint, DeVaux, Rockne, Continental and Studebaker. With hardly any paved roads on the island to speak of, by 1923 I. Kitagawa and Co. still sold more cars per capita than any car dealer west of the Rockies.

Like other longtime Hilo businesses, I. Kitagawa was devastated by both the 1946 and 1960 tsunami. It’s been around so long, however, that the company was also affected by the smaller tsunami that struck Hilo in 1923. That wave flooded its premises, but did not inflict major damage to the company’s buildings.

Besides natural disasters, I. Kitagawa has had to survive its share of manmade calamities, as well. It managed to weather the stock market crash of 1929 and the Great Depression quite well. It even added Chrysler-Plymouth vehicles and International trucks to its product line in 1936, making it one of the oldest Chrysler dealers in the United States.

Its operations, however, were profoundly impacted in 1941 with the outbreak of World War II. The company had just broken ground for a new facility near downtown Hilo at the intersection of Kamehameha Avenue and Piopio Street, but had to cease construction for the duration of the war.

From 1941 to 1945, American industry was focused on producing the machinery of war needed by the country’s military forces. With virtually no cars to sell, I. Kitagawa somehow survived by providing gasoline, auto parts, B.F. Goodrich tires, batteries and repair services. General Electric appliances were also added to its rapidly diversifying lineup.

War’s end signaled a dramatic uptick in business, and the company resumed construction of its new facilities in 1946 with son Tsutae Kitagawa as president. Before it could be completed, however, the 1946 tsunami struck Hilo, completely destroying the building along with everything else in its path. Tsutae temporarily relocated operations to a site everyone referred to as “The Garage” while the company rebuilt its facilities on Piopio Street.

Isojiro, the great pioneer, passed away in 1956 at the age of 79. The business, meanwhile, thrived under Tsutae’s leadership. Dodge cars and trucks joined the lineup in 1958 and the company had grown to nearly 50 employees when disaster struck yet again in the form of the 1960 tsunami. Once again, I. Kitagawa lost everything — cars, parts, equipment, tools and business documents were swept away and deposited into the Wailoa River.

It was too much for some family members to bear yet another devastating blow. This time, however, it was Tsutae’s son, Iwao, who stepped up and urged the family to rebuild. “My father was still young,” Brian recalls. “My grandparents were older; they didn’t want to restart the business, but they backed up my father in spite of the many questions that swirled around them. How do we do this? Where should we go?”

Iwao temporarily moved operations to an empty warehouse on Ponohawai Street near the Central Fire Station. As he contemplated his next move, the state offered businesses destroyed by the tsunami the opportunity to purchase land in an area known as Hilo Industrial Park. Iwao took the state’s offer and, along with a Small Business Administration loan and a bank loan, purchased a 3.5-acre parcel of land and built the company’s present Kawili Street showroom and headquarters.

The site was far from ideal, Brian explains. Business back then was centered in downtown Hilo, and the new location was considered the “boonies.” Now a busy, multilane artery jammed with traffic, Kanoelehua Avenue back then was just a quiet, bumpy road. “There was the power station on Railroad Avenue and only a few businesses here and there,” Brian added.

With Tsutae’s strong backing and Iwao’s energy and optimism, I. Kitagawa entered its new phase in 1961. Times changed and soon I. Kitagawa was back on its feet once again. In 1966, Iwao added the Datsun (now Nissan) line to his growing car business. He also added a second car dealership in Kona and two NAPA auto parts dealerships in Kailua-Kona and Captain Cook. At various times, the company also sold Volkswagens, Subarus and Hyundai cars.

One of Iwao’s key moves was asking his son, Brian, to return home after he graduated from Claremont McKenna College in 1978 to join the family business.

“My first job was washing cars,” Brian recalls, “. . . hundreds of cars.” This was followed by a series of unglamorous jobs — like counting parts — that simply needed to get done.

Brian assumed management of the company in the 1980s. He added Jeep-Eagle vehicles in the 1990s and consolidated the company’s two smaller Kona locations to create the highly successful Kona Auto Center.

“Each generation has its own challenges,” he philosophizes. “My great-grandfather did the start-up; my grandfather weathered World War II; and my father brought the company back from the 1960 tidal wave.”

Brian describes his challenges as being mainly financial, such as the demise of the island’s sugar plantations in the 1980s and ’90s, and periods of soaring interest rates. “It’s hard keeping any business going,” he admits, “especially when you’re dealing with outside factors that you have no control over.” He mentions Chrysler’s near-bankruptcy in the early-1980s and Nissan’s near-bankruptcy in the early 1990s as examples. His father once described these financial challenges as “economic tsunami.”

Someone once told Brian that family-owned businesses have but a 20 percent chance of survival from one generation to the next — and very few make it past three generations. “This company has survived many challenges because people did not give up,” he notes. “They kept it going. I’m doing my best to keep up that tradition.”

Fittingly, Brian’s office is furnished and decorated with an eclectic collection of new and old — including hand-me-down family heirlooms such as an old desk, artwork and a set of rattan chairs. Old photos adorn the various offices and meeting spaces. Brian remembers seeing them in his grandparents’ house as a child and had them professionally reproduced and framed.

When I. Kitagawa turned 100 about a dozen years ago, Brian was quoted as saying, “This company is not about buildings; it’s about people.” He proudly pointed out that the company had many longtime employees with 30-, 40-, even 50-plus years of service. “You can’t replace that kind of knowledge,” he said, mentioning a few individuals by name.

One of them is Tsuyako Tsutsumi, who helped his father and his grandfather pick up the pieces after two separate tsunami disasters. Another is Masaichi Nakamura, who served as his great-grandfather’s interpreter and right-hand man. Nakamura was still working when Brian came on board over 38 years ago. “I watched him, tried to learn from him,” Brian says. “I’ll never forget him still preparing the county bids using an abacus!”

In addition to notable old-timers, today there is one recent hire that bears mention. With a little more than a year under his belt, Brian’s son, Ian, is still feeling his way around the multifaceted company. He is the fifth generation to work at the company founded by his great-great-grandfather, Isojiro. A banker by training, Ian might even find himself refining his skill at washing cars — a lot of cars — without giving up. 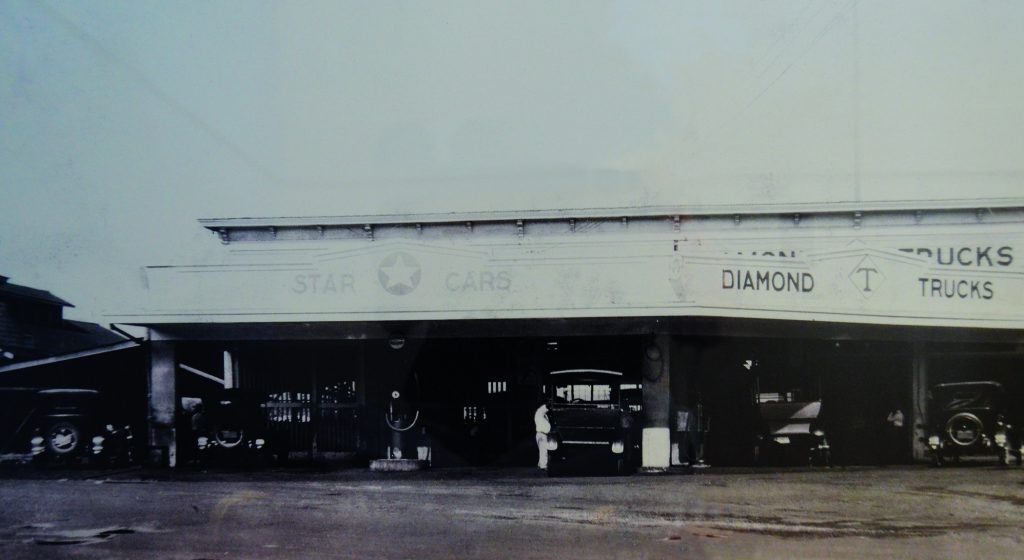