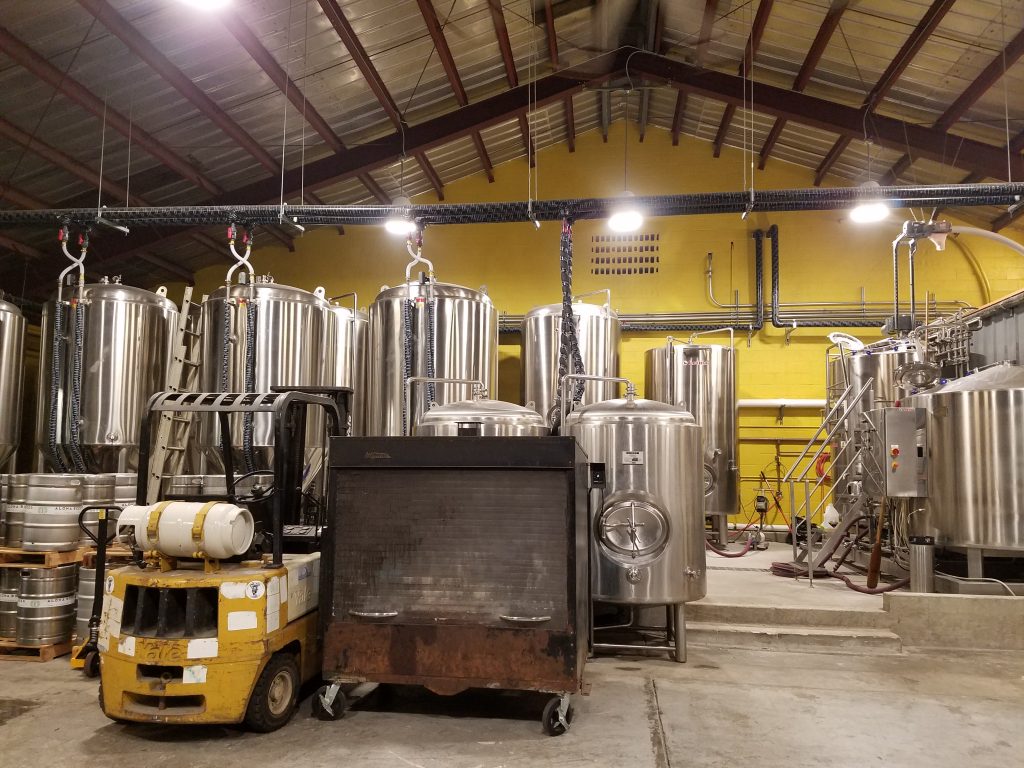 We must be getting younger! Why? Because we usually pay our first visit to a new restaurant about a year or two after its grand opening, in part because life (aka work) usually gets in the way and because we want to give the new restaurant time to iron out the kinks after the grand opening. Sometimes, we’re just plain lazy . . . you know, like, “What?! Drive back into town after I just got comfortable?!”

But here we were at Aloha Beer Company just two weeks after it had opened to the public. I must be 20-something again!

Aloha Beer Company opened its doors on Jan. 19, although the company actually began with brewmaster Dave Campbell (a Punahou grad) running Sam Choy’s Big Aloha Brewery several years ago. When Sam Choy’s doors shuttered, the brewing company was reorganized and temporarily moved to the Golden State of California while a permanent location was being secured back home. That permanent location is now in the heart of Kaka‘ako, at 700 Queen St. Along with the addition of brewer Kaiao Archer, a Kealakekua native, the team also enlisted the services of Chef Bob McGee to create the food menu for the restaurant side of the brewery. That means the menu would include locally purveyed beef and pork, along with Chef McGee’s tasty charcuterie. 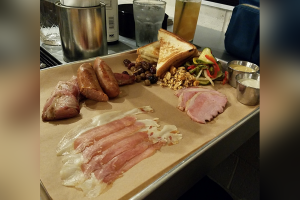 As you know, my usual beverage of choice comes from fermented grapes — I’m not a beer expert by any stretch of the imagination. When I do enjoy a beer, it’s usually a dark, bitter brew along the lines of Guinness or Anchor Steam. But with Aloha Beer Company back to being totally local, I felt the need to support them as much as possible by sampling all of their beer selections, but not because I wanted to drink a lot of beer. Yah, right!

The following description of each beer is from Aloha Beer Company’s menu. The ABV refers to the percentage of alcohol in each beer while the IBU refers to the bitterness, ranging from 0 to 120, with larger numbers for increasing bitterness. The ABV was in line with the alcohol levels of beers you might find at your local supermarket and so were the IBU levels. The bitterness in beer plays the same role as tannins in wine — they both cleanse the palate between bites of food, especially rich and/or fatty foods. That’s why you’ll find burgers, sausages and fried foods in abundance on the menus of most brewpubs. Personally, my favorite beers were the Brown Under, Queen Street Bitter and Red Zeppelin IPA, while the Mrs. enjoyed the Blonde, Carport Pale and Slow Mow.

Light, crisp, refreshing. Malted barley with a touch of corn. Enough hops to be present, but not so much as to turn off a mainstream lager drinker.

Two-row, crystal and debittered dark malt gives a deep brown color while offering only light, roasty notes. Featuring a liberal dose of Cascade hops and finished with an Australian hop from brown under.

Two-row, crystal, wheat and lots of chocolate malt make for a rich, roasty, bittersweet beer with a residual sweetness that will call to mind a Thai cappuccino.

Two-row, Munich and a touch of white wheat with Saison Dupont yeast which throws off the quintessential fruit and funk, which is indicative of the style. An easy-drinking light, unfiltered beer.

West Coast (San Diego) style PA. Two-row, wheat and light crystal 15 malt make for an IPA that is pale in color while CTZ, Simcoe, Citra and Amarillo hops offer up the hoppy bitterness expected of the style. Big Citra dry hops makes for an unmistakable citrus quality on the nose.

A classic version of the British-inspired style that was one of the first styles to really take hold in the early days of the American craft beer scene. Toffee notes and maltiness with balancing hops. Two-row, crystal 60 and Munich malt, wheat malt and flaked barley with CTZ, Cascade and a big Mount Hood finish which gives an earthy spiciness.

Two-row, crystal 40, wheat and dextrin are a traditional malt bill for an American pale ale. Carport is accented by CTZ, Cascade and Centennial hops and picks up nuance and depth from a British whitehead yeast.

Our version of the classic California common, or “steam,” beer. Warmer fermentation of lager yeast creates a complex and approachable beer with a Nelson Sauvin hop finish.

On a subsequent visit, I decided to concentrate on Chef McGee’s culinary creations. They included several sandwich selections with proteins smoked on-site as well as salads and steak fries that are served as is or slathered with various gravies for an additional $3 to $4. On our initial visit, we ran into Chef McGee, who showed us Aloha Beer’s kitchen. Well, it’s not really a kitchen. It turns out that when the owners of Aloha Beer decided to also create the restaurant side of the business, they approached the state Department of Health and asked what would be the fastest way to legally serve food in a brewery. The DOH suggested a food truck. So lo and behold, Aloha Beer’s kitchen is actually a brand new food truck parked in their building with servers walking up to the side window to pick up their orders.

Since I enjoy preparing and consuming pulled pork sandwiches, I originally intended on sampling the smoked butt sandwich with Carolina vinegar and slaw. But I have yet to try it, even after two visits, as the Chef’s Special board always has me following my own ordering mantra, which is: When you see both a special and a regular menu item that you want to sample, always go with the special as the regular item can be ordered on a subsequent visit. Specials are usually a one-time offer. We first sampled Chef McGee’s spectacular Mountain View Farms Cured and Smoked special (smoked sausages, tenderloin, and loin and cured pork shoulder), which included pickles, white bread (a traditional starch at most Southern BBQ houses) and various mustards. On our second visit, we sampled the Pono Pork Chop special with loin and center cut pork chops served with salad, white bread, pickles and burnt end (the charred end of smoked brisket) pinto beans with slow-cooked bacon. Although both meals were totally satisfying and filling, I am still determined to try the smoked butt sandwich with the steak fries with lamb gravy.