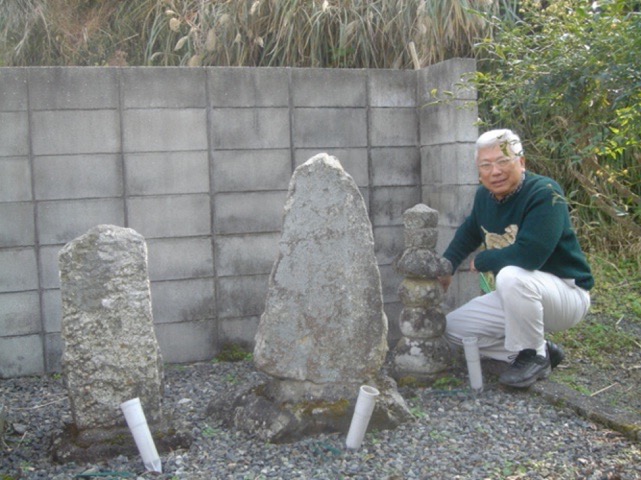 I called my daughter at work and told her the good news: My father had heard that we were headed to Japan on a two-week trip and offered to take us to his furusato. Dad was born in Shiya Village in the former Takata-gun district in rural Hiroshima, where he had spent his childhood days. At the age of 15, he was sent to Hawai‘i for a chance at a better life. 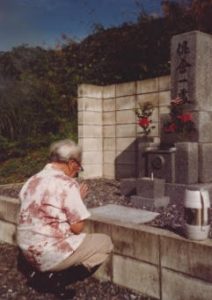 For our Japan trip, Lauri and I had planned to start in Okinawa, then fly to Kagoshima and, without a fixed itinerary, make use of JR Railpasses to get to our final destination, Tökyö. A detour to Takata-gun would truly be a highlight. Grateful for my dad’s offer, I agreed to pick up a JR Railpass for him to use while he traveled partway with us.

I had missed a previous opportunity to visit Hiroshima 30 years earlier. In 1964, as a 21-year-old U.S. Navy ensign, receiving orders to a ship homeported in Yokosuka was a dream come true. I had never been to Japan before and was looking forward to taking full advantage of my assignment, going to all the exotic places I had read and heard about all my life.

Unfortunately, within weeks of arriving at Yokosuka, a pair of North Vietnamese patrol boats opened fire on a U.S. Navy ship in the Tonkin Gulf, and the Vietnam War was on. From then on, my ship would spend months at a time deployed in the South China Sea. So much for my grand plans to visit every scenic spot in Japan. I made it as far west as Ösaka and Kyöto, but not to Hiroshima. Truth be told, at the time, Hiroshima wasn’t on my list of top 10 places I wanted to visit. Hiroshima was my dad’s furusato; my hometown was Honolulu.

But now, 30 years older and a bit wiser, I could better understand the significance of a furusato. More than a hometown, more than just where one happened to have been born and raised, a furusato is a native place, a place where one can appreciate his or her roots. It’s a place of origin, and we were so fortunate to have Dad show us his old home to help us better appreciate who we were. He was just as excited to be able to take us there.

Ten days before we were scheduled to leave, my father died suddenly of heart failure. Lauri and I decided to go ahead with our trip to Japan anyway, without Dad and without a stop in Takata-gun. My furusato homecoming would have to wait for another day. 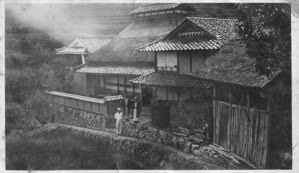 A few years later, I had a chance to extend a business trip to Japan to visit my Saeki cousin in Hiroshima City. (Somehow, our “Saeki” name became “Saiki” once it got to Hawai‘i.) After telling my cousin’s wife, Itsuko, about having missed my chance to see my dad’s birthplace years back, she offered to take me to Shiya. Two of her children, Izumi and Yoshi, took time off from work and the four of us headed out by car on the hour-long drive to the countryside.

As the concrete office buildings along the main thoroughfares grew fewer and fewer until they finally faded from sight and were replaced with farm homes separated by rice fields, I could feel the excitement building within me. I would see a store sign with our surname in kanji. And another! Saeki country. We must be getting close!

Shiya sits in the middle of a valley. We got off the main road and drove up the slope along the woods until we stopped at a clearing. Off to the side were the remains of a family home and storehouse, covered in tall weeds and vines. Although only the foundation remained, it was unmistakable from photos and pencil drawings I had seen before that this was the old Saeki family homestead. It was sad to see the home in ruins, and yet, I knew that there were days in a previous era when it was bustling with life.

As I walked around the site of the old home, I couldn’t help but smile as I pictured my father as a 5-year-old, running around playing kakurenbo, or hide-and-seek, with his brothers and sisters. In this tranquil countryside, it was difficult to picture the extreme hardships his family must have endured daily. How heartbreaking it must have been for the family to have to send four of their children to a far-off land.

Wandering about the foundations, I imagined Dad as a youngster waking up in the middle of the night, tiptoeing out and making shishi on the side of the house. I wanted to do the same thing at what might have been the exact same spot, but no, not with Itsuko, Izumi and Yoshi around.

As I walked down toward the rice fields, it suddenly dawned on me that it wasn’t only my father who had walked this path. His parents had, too, and their parents and their parents’ parents. And here I was today, tracing what might be identical footsteps of several generations of ancestors.

Corny as it may sound, words from a poem I learned in English literature class at Roosevelt High School came to mind.

“Breathes there a man with soul so dead, who never to himself hath said, This is my own, my native land!”

I wasn’t sure whether I had the words exactly right, or remembered under what circumstances Sir Walter Scott had written them, but I could finally appreciate the powerful emotion one’s native land, one’s furusato, could evoke.

The property no longer belongs to the Saeki family and none of my relatives live in Shiya any more. There was no explanation of how ownership of the home and adjoining rice fields had changed. I didn’t ask. It seemed it was better left unsaid.

Further up the road was the Saeki family gravesite with a collection of graves that had been moved down from the old graveyard on the upper slopes. As I placed flowers at the range of graves — from new-style polished granite tributes to the ancient simple rounded stones — the meaning of “Okagesama de” began to sink in. Because of my ancestors, I am who I am. I had never thought much about them before. It had taken all of 62 years for me to realize the simple fact that if a single one of my ancestors was missing, I wouldn’t be here today. Until then, I had taken those who had come before me for granted. But standing there, I knew I needed to say “Thank you” to each and every one of them for the gift of my life.

Returning to the main road, we stopped at a temple. An older woman serving as caretaker was overjoyed that someone from overseas would take the time to return to his homeland to pay respects to his ancestors. She cordially served us tea, opened up the altar hall and started chanting so that I could make an incense offering. Everything went well until she started singing a gatha and expected me to sing along, but not being familiar with it, I remained silent. That’s when she chided me for not knowing the words and stopped being so cordial. Itsuko had to rescue me and explain that I was, after all, a foreigner.

Things went a lot more smoothly at the neighborhood shrine, mostly because there was no minister or anyone else there to remind me of my deficient social graces.

Yoshi told me that the old Meiji-era school my father had attended was still standing and just around the bend. Naturally, I wanted to see it. The repurposed wooden schoolhouse sits on private property now, which prevented me from getting close enough to peer inside the windows. Dad has told me that going to school was one of the highlights of his life growing up. Among my treasured keepsakes at home are some of his calligraphy and sumi-e brush art works from when he was 10 or 11 years old, graded “maru-maru” by his teacher.

Having felt this reconnection with my roots in Shiya, I promised to return regularly. Not only that, I felt that I needed to share the same furusato experience with my siblings and all my Saiki cousins in Hawai‘i and their families. I wondered how many of our Honolulu Takata Gunjinkai members had visited their furusato. The group has about 100 member-families who trace their roots to Takata-gun, which is now known as Akitakata-shi (Akitakata City).

Fortunately, my sempai (mentor) Yutaka Inokuchi had been part of a club trip to Takata-gun in the past and we could pattern our trips after that experience. We’ve been planning and taking members to their ancestral homeland every other year or so now for the past 10 years.

Since the club’s founders in 1930 were mostly Issei, we have village and town origin records for just about all of our members. We provide members who want to research their family histories with the information that may help them start their family trees. Placing names in a genealogy chart can be a genuinely fulfilling activity. Those special chicken-skin moments, however, only come from being at your furusato and walking in your ancestors’ footsteps.

Nothing gives us greater satisfaction as satogaeri (return to one’s hometown) leaders than to have our members, including yonsei and gosei, see, hear and touch their ancestral homeland, show appreciation for their ancestors, and discover their heritage and learn more about who they are.

On a typical trip, after spending time in our furusato, we set aside another week and a half whetting our appetites to explore other parts of Japan. Past side trips have included visits to Tsuwano in Shimane Prefecture by steam locomotive, Sakamoto Ryoma country in Köchi Prefecture, Saga Prefecture for the Karatsu Kunchi Festival and a jakoten (a tempura-like dish made from the jako fish that is grinded into a paste and deep-fried) factory in Uwajima, Ehime Prefecture. For our next trip, we’re talking about roaming the sand dunes in Tottori Prefecture and discovering other delights along the Japan Sea coast. Tökyö you do on your own.

On the eve before departing on each satogaeri trip, I open my desk drawer and pull out the Railpass voucher I had purchased for my dad — I never returned it for a refund — and let him know I’m visiting our furusato once again. I’ve hung on to the voucher all this time, perhaps still hoping I’ll get a first-hand tour some day.

And one day, I hope to shishi at that spot behind the house, too.

Ken Saiki is a past president of Honolulu Hiroshima Kenjin Kai and Honolulu Takata Gunjinkai. He is the son of the late Kiyoto and Patsy Sumie Saiki. 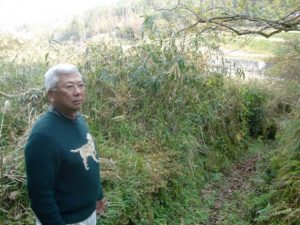