Editor’s note: Author Bill Fernandez was an inquisitive and impressionable young boy growing up on Kaua‘i when Japan launched its aerial attack on Pearl Harbor and other military installations on Oahu on Dec. 7, 1941, triggering America’s entry into World War II. Even at that young age, he wondered how the war would affect relationships with his family members and friends. Fernandez details those impressions and experiences in a section titled “War” in his book, “Kaua‘i Kids in Peace and War.” 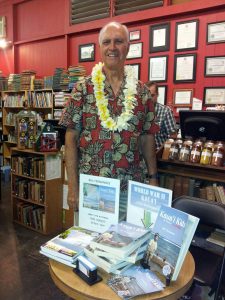 Following his early schooling on Kaua‘i, Fernandez was sent to Oahu to attend the Kamehameha Schools. He earned both his bachelor’s and law degrees from Stanford University. After practicing law and being elected mayor of Sunnyvale, Calif., Fernandez served as a California Superior Court judge in Santa Clara County until his retirement.

He and his wife Judith then packed up their belongings and returned to his beloved Kaua‘i, where they now live in the beachfront home in Kapa‘a that his mother bought with her earnings working in the pineapple cannery. With Judi as his publishing partner, Fernandez began chronicling his childhood memories. In 2013, they published “Kaua‘i Kids in Peace and War.” Fernandez also authored three other books: “Hawaii in War and Peace,” “Rainbows Over Kapa‘a” and, most recently, a murder mystery titled “Cult of Ku.”

With the 75th anniversary commemoration of Japan’s attack on Pearl Harbor still fresh in our minds, we asked Fernandez for permission to share a chapter from “Kaua‘i Kids in Peace and War” with our readers. It provides valuable insight into the life schoolchildren lived on Kaua‘i during the war years. The Herald thanks Bill Fernandez for allowing us to share this chapter with you.

I dedicate this portion of my book to the courageous and loyal Nisei men of the 100th Battalion, 442d Regimental Combat Team of the United States Army, and the Military Intelligence Service

An olive drab pouch holding my gas mask banged my side as I trudged up a red hill heading for Kapa‘a School. Other kids walked with me, our bare feet flinging up clouds of red dirt. No one talked. There was no horseplay. We had been warned to behave on our way to and from school. We didn’t need any warning, none of us felt like laughing, especially the Japanese kids.

Anything that you said or did could be misinterpreted as picking on your Japanese friends or being disloyal. At the moment, America had control of Hawai‘i. But Japan ruled the Pacific, conquering everything in the path of its war machine. Many of us felt alone and abandoned by our country.