Stephen Chinen’s workbook, “RAINBOWS in Me: Values of Aloha” could not have been released at a better time. Aimed at elementary school-aged children, the workbook uses the motif of a rainbow to help children reflect on the values inherent in the Aloha Spirit — values such as respect, appreciation and integrity.

“Rainbows also symbolize one of the greatest things about Hawai‘i,” Chinen writes in his introduction, “for it represents all the people from different origins coming here and living together in relative harmony.”

What a breath of fresh and fragrant air this workbook is, especially on the heels of a national election season in which insults were routinely hurled at opponents and adults often exhibited behaviors that were intentionally mean-spirited and dysfunctional. 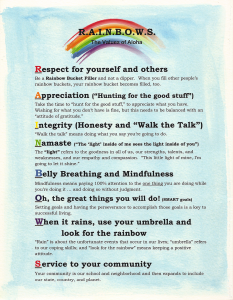 The message of “RAINBOWS in Me,” however, is one of learning to respect and appreciate differences in culture and in each other. It reminds children that they live in a special place called Hawai‘i, where the Aloha Spirit lives and should be practiced. Chinen quotes the late Auntie Pilahi Päki, a treasured kupuna (elder), who inspired the Aloha Spirit Law, which was enacted in 1986 by the state of Hawai‘i. The law includes these heartfelt words: “Each person must think and emote good feelings to each other.”

Longtime readers of The Hawai‘i Herald may remember Stephen Chinen’s name. He was introduced in a July 1, 2007, Herald feature story titled, “A Heart Full of Rainbows,” about an Iraq War soldier’s story of love. That soldier was Chinen, who, at the time, was a 52-year-old Mililani resident sharing an inspiring story with readers about fulfilling a longtime dream of visiting Japan with his then-9-year-old daughter, Nikki. The trip was special because Chinen and Nikki’s mother, Emi, had met in Japan while teaching English at the Hiroshima YMCA in the mid-1980s. They wanted to show Nikki the country where their love had blossomed. It was also important to him because he would be leaving for Iraq in a few months. A member of the U.S. Army Reserve, Chinen had received orders to deploy with the 657th ASG (Area Support Group) on Aug. 3, 2006. No one can ever be certain about the outcome of war, and as a counselor at Helemano Elementary School, just outside of Wahiawä, he knew all too well about war’s impact on a soldier’s family. Before leaving for Iraq, Chinen wrote letters to Nikki, “just in case” he didn’t return to speak them to her in person.

To read the full article, please subscribe to The Herald!