It was with deep sadness that we learned of the passing of Congressman K. Mark Takai on July 20 from pancreatic cancer at the too-young age of 49. Our thoughts immediately focused on his young family and his parents and siblings and the loss they are feeling.

We had gotten comfortable with the sound of his new title — Congressman Mark Takai. It was a title he had earned and would likely have held on to for many years.

I emailed former University of Hawai‘i at Mänoa ethnic studies director Dr. Franklin Odo, who is currently the John Jay McCloy Visiting Professor of American Institutions and International Diplomacy at Amherst College in Massachusetts. Odo, a D.C. resident, was among the many Hawai‘i transplants who had welcomed Takai to the nation’s capital when he arrived there to assume his new duties representing Hawai‘i in the U.S. House of Representatives.

“He is missed,” emailed Odo from Amherst. I asked him what he remembered about Takai, not realizing how long they had known each other.

“I remember Mark Takai well, beginning with his years in junior high and high school. He was an outstanding competitive swimmer, dominant in Hawai‘i circles and competitive on the national youth scene.” Odo’s own children began swimming rather late and “were no match for swimmers like Mark,” he said.

“I remember the grueling training they all had to face — practices for several hours every day, once at 5 a.m., before school, and another at 5 p.m., after classes. I suspect that kind of endurance and capacity for work served Mark well in his careers.” 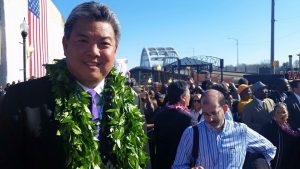