Sa Wol grew up in the orphanage with her two best friends, Oh Wol and Hye Sang. Min Ho Oh comes to adopt Hye Sang, thinking she is his biological daughter. However, on the day the orphanage collapses, Hye Sang finds out the true daughter is Sa Wol. She traps the orphanage manager (her true father) and Oh Wol in the collapsing building and sighs in relief believing they have died. But when Sa Wol is brought into her new family, Hye Sang spends the next 25 years tormenting her and burying the truth. As her web of lies grows, it becomes harder to maintain, and eventually two true friends and their families will be reunited.

Hye-jung Yoo was a wayward girl in high school with a prickly personality. Due to her many childhood scars, Hye-jung keeps her heart closed towards other people. However, she changes after meeting her mentor Ji-hong Hong, who plays a key role in transforming her life from a “hopeless” delinquent to a compassionate doctor. They part ways subsequently but meet again after 13 years, when Hye-jung Yoo becomes a doctor.

The son of one of Korea’s top actresses is kidnapped. The actress struggles to carry out a mission on a live reality show in following the kidnapper’s demands.

“Between Family,” Monday and Tuesday at 10 p.m./re-airs on Tuesday and Wednesday at 1 p.m.

“Second to Last Love,” Friday and Saturday at 7:45 p.m./re-airs on Saturday and Sunday at noon.

A woman treats her son-in-law like her real son. The son-in-law meets a woman and marries her which causes conflicts. 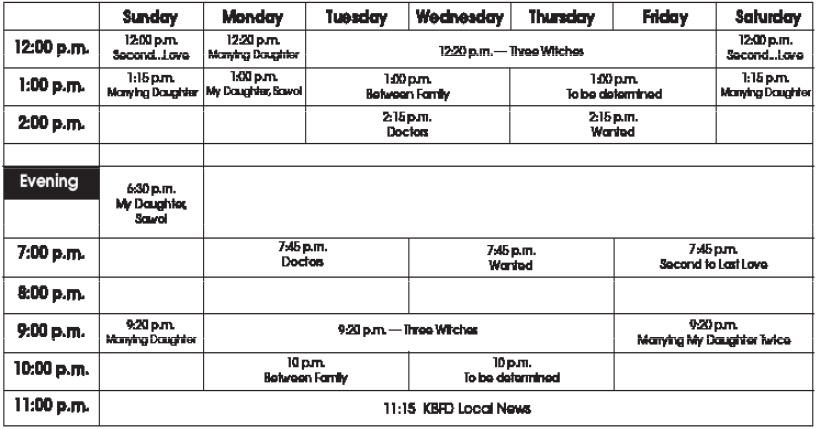