On April 19, two former members of the United States Congress who met more than 70 years ago on opposites sides of a relocation camp barbed wire fence in Wyoming shared the stage at the Library of Congress in Washington, D.C. The occasion was the second Daniel K. Inouye Institute Distinguished Lecture Series. The two men, former U.S. Rep. Norman Mineta, a Democrat from California who served in Congress for two decades, and retired U.S. Sen. Alan Simpson of Wyoming, a Republican, who served 18 years in the Senate, met as 12-year-old boy scouts. Mineta was also the first Asian American appointed to a cabinet post, serving the final six months of President Bill Clinton’s term as Commerce Secretary and, subsequently, as President George W. Bush’s Transportation Secretary.

Mineta and Simpson engaged in a lively conversation on a number of topics relating to “Protecting Civil Liberties and National Security,” the theme of the second program in the Daniel K. Inouye Institute Distinguished Lecture series. U.S. Sen. Daniel K. Inouye, a highly decorated World War II veteran from Hawai‘i who fought with the 442nd Regimental Combat Team, served in the U.S. Congress for over 50 years prior to his passing while still in office in December 2012. Sen. Inouye’s widow, Irene Hirano Inouye, was in the Washington audience, while his son, Ken Inouye, attended the live stream of the program in Honolulu at the Japanese Cultural Center of Hawai‘i. 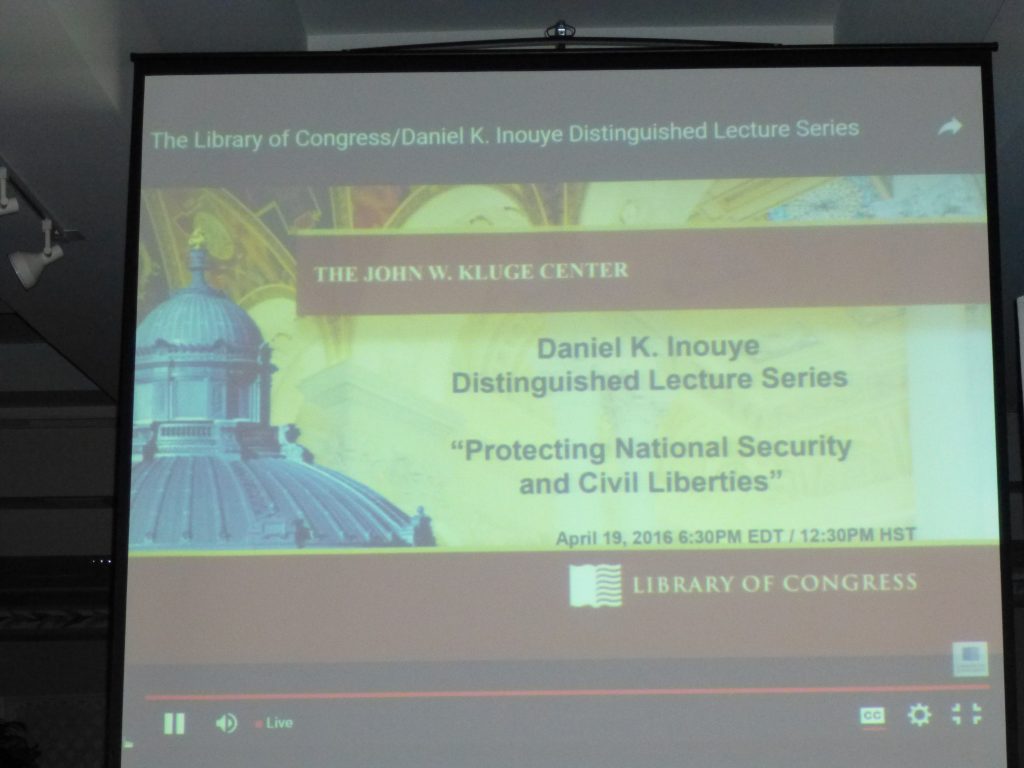 The protection of civil liberties is a subject near and dear to Hanabusa’s and Tokuda’s hearts, as both had a family member who was interned in the aftermath of Japan’s attack on Pearl Harbor. Tokuda, a tech-savvy yonsei, encouraged the audience to share their comments on the discussion on Twitter and other social media sites.

The program was moderated by former ABC News White House correspondent Ann Compton, who is now retired. The discussion was also live-streamed at the University of Hawai‘i at Mänoa. Compton, who covered both men as a reporter, drew laughter from the audience with her comment that Mineta and Simpson were “two of the best-loved people in this town (D.C.), and that’s no small achievement.”

The program began with three scouts from the Aloha Council of Boy Scouts of America reciting the pledge of allegiance and the scout’s oath. Scouting had a prominent place in the April program because Mineta and Simpson were both boy scouts when they met at Heart Mountain, where Mineta’s family was interned during World War II. One day, Simpson’s troop visited the camp and he and Mineta became fast friends while practicing the tying of scout knots.

After reading the evacuation order, Mineta said he recalled asking his older brother what was the difference was between an alien and a non-alien. After hearing his brother’s explanation, he quickly concluded that a “non-alien” was, in their case, a citizen and that the U.S. government was perpetrating this injustice against its own citizens. “That’s why, to this day, I cherish the word ‘citizen,’” Mineta said.

The Mineta family returned to California after the war. Decades later, Norman and Alan, now grown men, were reunited when Simpson saw a photo of Mineta, who had been elected mayor of San Jose. Simpson called Mineta and the two rekindled their friendship and have remained friends ever since, despite their different political party affiliation and sometimes-opposing points of view on issues.

In comparing the 1941 attack on Pearl Harbor and the 2001 terrorist attack that brought down the World Trade Center and his support of the Patriot Act, Sen. Simpson noted that there “was not one single case of espionage,” by anyone of Japanese ancestry in America in 1941. “It’s a very different thing now,” he said of 9/11.

Secretary Mineta took the audience through a nearly hour-by-hour recap of his Sept. 11, 2001, decision to order the immediate landing at the nearest airport of all commercial aircraft after a jetliner had flown into the South Tower of the World Trade Center, just minutes after another plane had flown into the North Tower and another had crashed into the U.S. Pentagon building. By then, it was clear that the United States was under attack. In less than two and a half hours, 5,138 aircraft flying in U.S. air space had landed and remained grounded until aviation security guidelines that Mineta stressed should not profile any racial or ethnic group had been developed.

The “lecture” was a lively conversation from start to finish, prompting viewers to search their hearts and minds on issues such as the Patriot Act, which Congress passed in the aftermath of 9/11; individual privacy; government surveillance; immigration; the Guantanamo prison and even the political gridlock in Washington today.

Both Mineta and Simpson had interesting comments to share with the audience.

Simpson on privacy: “What have you got to hide?”

Simpson on identification guidelines: “Do something that has to be done by everybody.”

Mineta on providing military equipment to local police: “How do you relate to your community?”

In reflecting on the political gridlock in Washington today, Simpson noted, “People don’t just dislike anyone anymore — they hate them.” He said politics never got in the way of his friendship with Mineta, noting that they became friends when they were both 12 years old. Now, at age 84, they are still friends. “Friendship is a beautiful thing,” he concluded.

A video of the entire lecture can be viewed at www.danielkinouyelectures.org.