“A generation which ignores history has no past and no future.” — Robert Heinlein

I should just print up this quote as a poster and staple it to the wall of my college classroom. In recent months, I’ve encountered various students in my class and argued with a stranger on a social media Internet site over the value of understanding history. That “friend of a friend of a friend” castigated me for being a “dumb dumb dumb democrat” and “looking for a free handout” for pointing out that his chosen presidential candidate was using tactics that reminded me of very wrongful events from the past, such as what led to the Holocaust and the internment of Japanese Americans during World War II. “Who cares about ancient history!” he typed. “You’re just looking for a free handout! History doesn’t matter. We need to make America great again! We need to fix our ‘pussy military!’”

For someone like that, facts don’t matter. History doesn’t matter. All that matters is his indignant anger, and the rest of us are just brainwashed idiots, traitors and moochers looking for free handouts from the government, so we should be locked up because . . . because . . . Freedom! Because America!

Those two incidents made me realize how deeply antagonistic some people are when it comes to learning about the past. That’s a pity, because for me, knowledge of the past gives us insight and direction — not so that we can “go back” to the past, but so we can properly chart our future. Hence, Heinlein’s remark: “A generation which ignores history has no past and no future.”

Art history, therefore, gives us visual insight into our past. I can just imagine my own student making a sour face, as if I was talking about taking some awful-tasting medicine. “Art history . . . It’s GOOD for you! Now take your medicine!” No, the ultimate secret is, if you understand art and art history, it’s not only culturally enlightening (Bor—ing!) But it’s a whole lot of fun!

So, yes, if you take a trip to the Honolulu Museum of Art, make time to see the show (one of many currently on display), “Hiroshige’s City: From Edo to Tokyo.” It’s historically enlightening, but it’s also a whole lot of fun.

The show is fun even for those who don’t have enough Japanese art history background. You won’t be left in the dark. Consisting primarily of woodblock prints by the famous artist Utagawa Hiroshige and his son, Hiroshige II, the show is full of handy and informative tags next to the prints, explaining how each depicts the growth of a backwater hick town into the booming medieval samurai metropolis of Edo, which later became the modern megalopolis of Greater Tökyö.

Woodblock prints and books served as sort of tabloid magazines/travel guides/posters for your walls of famous actors/samurai/legendary figures. Although the show focuses on Hiroshige and his son’s color prints of scenes of Edo, there are also black and white prints by lesser-known woodblock artists. Together with modern lithographic prints by Motoda Hisaharu and video art by Yoshimura Ayako, the sampling focuses on the growth and energy of the metropolis of Edo/Tökyö.

Yes, this sounds so high-faluting artsy, doesn’t it? But there’s also a simple joy in seeing these amazing pieces by the masterful Hiroshige and his son. The artworks depict with rich colors (still juicy and scrumptious after over a century) and startling, unique compositions the pulse of the city as a living, breathing being, its sights and scenery populated by tiny flecks of humanity, hustling and bustling, going on pilgrimages, selling and buying, poling down a river, ogling at street prostitutes, gambling, working, building bridges and structures, eating, fighting and drinking.

The father and adopted son duo of artists spanned the time from the late 1700s to the early 1800s, just before Japan opened itself up to the West. But I could see that the woodblock artists were already experimenting with Western techniques of linear perspective and shading, breaking up the once-flat and smashed visual space with visual depth. And already in the late 1800s, once Japanese woodblock prints made their way to Europe, Western artists were also copying the flat space and rich, pure colors of Japanese prints. That led to new art movements by Impressionists and others, like Vincent Van Gogh, who was so ga-ga over Japanese woodblock prints that he reproduced his favorites in oil paints. Cultural appropriation went both ways.

The liveliness of the prints creates an optimistic view of life in Edo. Sometimes when we look at modern Japan, we may feel it’s all doom and gloom. Japan is dealing with an aging and shrinking population. The countryside is being depopulated as young people are sucked inevitably into the vortex and allure of the big cities. Despite being the third-largest economy, Japan is beset with non-performing “zombie” companies and a recession that is as hard to beat as a lingering flu. The effects of the Töhoku tsunami and the Fukushima nuclear reactor disaster are still being felt. Motoda Hisaharu’s post-apocalyptic ruined city lithographic prints symbolize this feeling that Japan in the 21st century is exhausted, tapped out, worn out and fading into senility.

Perhaps. But a country that produced such colorful, busy, optimistic and startlingly futuristically composed artwork in the past cannot be counted out so easily. As anyone who has visited Tökyö will tell you, its people still embody the same verve and vigor as those city dwellers depicted in the prints by Hiroshige — people who love to go sightseeing, love to work hard, love to play even harder and love to keep building toward a better future, despite disasters and economic and cultural dislocations.

“Hiroshige’s City: From Edo to Tokyo” continues through Aug. 21 at the Honolulu Museum of Art. Museum hours are Tuesday through Saturday, 10 a.m.-4 p.m.; Sunday, noon-4 p.m. Closed on Mondays. Admission is $10 and free for minors under age 17, active military and their families with valid ID and museum members. For more information, call 532-8700.

Wayne Muromoto is a former Hawai‘i Herald staff writer. He also spent 10 years teaching art and digital art at a private high school. For the past 15 years, he has been teaching digital art and digital photography at Leeward Community College. Wayne also continues to pursue peace through a bowl of tea as a practitioner of Urasenke tea ceremony. 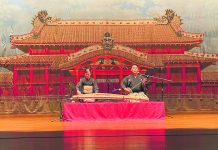 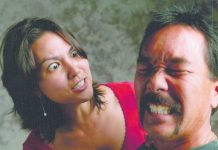