The primary symbol that defines my day job is, invariably, that wide, deep bowl containing the pounding device. And just to make sure you know what profession I’m speaking of, the bowl usually has a pronounced “Rx” labeled on its side. Admittedly, it’s an outdated symbol for a profession that rarely compounds medications anymore, as most prescribed medications are readily available in tablet, capsule, liquid or injectable forms. In fact, there are only a few pharmacies in the 50th that specialize in compounded prescriptions. But that symbol still has a place in this pharmacist’s kitchen, not for creating medications, but for those luscious sauces and spreads named after and created with the pounding device, the pestle.

You Say Pesto, I Say Pistou

The sauce that usually comes to mind that is named after the pestle is that fragrant, fresh basil-based sauce known as pesto, which hails from Genoa, the capital city of Liguria, Italy. I’m sure you’ve sampled it as-is, tossed with some penne, linguine or gnocchi. This ubiquitous sauce is as simple as they come: fresh basil, toasted pine nuts, fresh garlic, Parmigiano-Reggiano and Pecorino cheese and extra virgin olive oil with salt and black pepper.

I’m sure the French would beg to differ that Italian pesto is the classic basil-based sauce rather than their own pistou, which was created in Provence and also utilizes fresh basil, fresh garlic and olive oil and may include cheese. However, pine nuts, or other nuts for that matter, are never used. Although Italians use pesto primarily as a pasta sauce, the French use pistou as an accompaniment to their regional soups.

Whichever version you favor, making your own is a snap, especially when you employ the modern mortar and pestle — commonly referred to as the food processor. It saves a lot of time and elbow grease. For authenticity’s sake, however, you should rename your creation Cuisinart alla Genovese.

I normally use a seven-cup food processor, so I never really measure ingredients and mainly use the capacity of the food processor bowl as my main measurement. First, combine 1/4 cup of toasted pine nuts and 2 to 3 peeled cloves of fresh garlic and pulse until it resembles rough crumbs. Fill half of the processing bowl with the fresh basil, salt and black pepper to taste, 1/2 cup of Parmigiano-Reggiano or Pecorino cheese and then fill the rest of the processing bowl with the remainder of the fresh basil. Turn on the processor and drizzle about 1/2 to 2/3 cups of extra virgin olive oil until the sauce reaches the consistency you desire. You probably have stop at some point to scrape the pieces that have gotten stuck to the sides of the bowl.

I intentionally left out one ingredient because it’s not just essential to Pesto Genovese but also to any uncooked green- or red- colored sauce. I am speaking of Vitamin C. Simply crush 3 to 4 grams (that’s six to eight 500mg tablets) and sprinkle the powder between the two layers of fresh herbs. As an antioxidant, Vitamin C slows the browning (caused by oxidation) of green and red sauces.

My personal favorite pesto isn’t made with any basil, but rather with that “love it or hate it” herb, cilantro. In fact, I flavor my cilantro with food. Yes, you read that right. I can never have too much cilantro in any dish. Period. My personal version of cilantro pesto uses macadamia nuts (to support our local economy) instead of pine nuts, and I don’t add any cheese, although I still add the powdered Vitamin C. If you love cilantro as much as I do, be sure to include the cilantro stems, as they add a lot more flavor than just the leaves alone.

Your finished cilantro pesto is great as a sauce for various pastas or mixed with mayonnaise, creating a luscious sandwich spread. Or, you can follow the lead of my better half and mix your cilantro pesto with equal parts of sweet chili sauce (found in the Asian section of most supermarkets). She simply tosses it with cooked and drained Barilla Protein Plus pasta for a great warm or cold pasta course, to which I have added quickly poached shrimp, although any shellfish or sliced poultry works.

Although pesto is primarily thought of as a fresh herb, garlic and oil concoction, remember that its name simply refers to the pounding device usually accompanied by a pounding “bowl” or mortar, not the ingredients themselves. For instance, hummus isn’t just available in 1-pound containers from Costco. I previously sampled a Greek hummus at the Taverna Opa in Orlando, Fla., that was prepared tableside in a mortar with fresh garlic, lemon juice and olive oil that the server pounded right on the spot and served with toasted pita wedges. I believe this would qualify as Hummus Pesto.

Another pesto is that rich and filling is a Cuban specialty known as mofongo, which is fried plantains mashed in a Cuban-style mortar and pestle with garlic, spices and crispy chicharrons, or crispy roasted pork skin. Mofongo is prepared with either a personal-sized mortar and pestles or industrial-sized versions that can feed a whole family. Thus, the Cuban version would qualify as Mofongo Pesto.

The one Japanese form of “pesto” that everyone is probably familiar with is that Oshogatsu specialty, mochi rice pesto, which is pounded with the Japanese pestle, or kine, while being hand-turned in the Japanese mortar, or usu. Too much work to pound your own mochi “pesto?” Then how about downsizing a little to the other Japanese mortar and pestle, the suribachi and surikogi? You’ve never heard of a suribachi and surikogi? I’m sure you’ve seen them in Obaachan’s kitchen — you just didn’t know what they were called.

So now that you remember what a suribachi and surikogi are, how about sampling this sesame seed, tofu and miso “pesto?” It’s refreshing as a side or vegetable dish. Of course, since the inspiration for this dish is pure Japanese, I can’t call it a pesto, so I’m calling it Nippon Surikogi (Japanese pestle).

Grind the sesame seeds in the suribachi until a coarse crumb-like texture is attained. Mix the sesame seeds with the next four ingredients and then toss with the torn lettuce. Adding the konnyaku gives the dish a little more body. 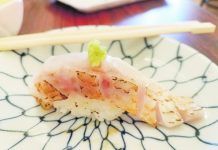 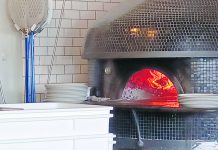