My wife Laura and I arrived at Narita International Airport on March 9 after a very long, nine-hour flight from Honolulu. We took the train into Tökyö, where we spent our first night back in Japan in two years. The next day, we caught the JR Töhoku Shinkansen from Ueno Station to Sendai in Miyagi Prefecture, an hour-long commute. In Miyagi, we rented a car and drove for about two hours to Minamisanriku.

For us, this trip was a homecoming of sorts, a return to a place and a people with whom we had developed a bond after volunteering our help in their time of need. It wasn’t a completely somber journey back, as Laura and I enjoyed some laughs during our short stay in Miyagi.

When we arrived in Minamisanriku, we could barely recognize some of the Shizugawa section of the town near the 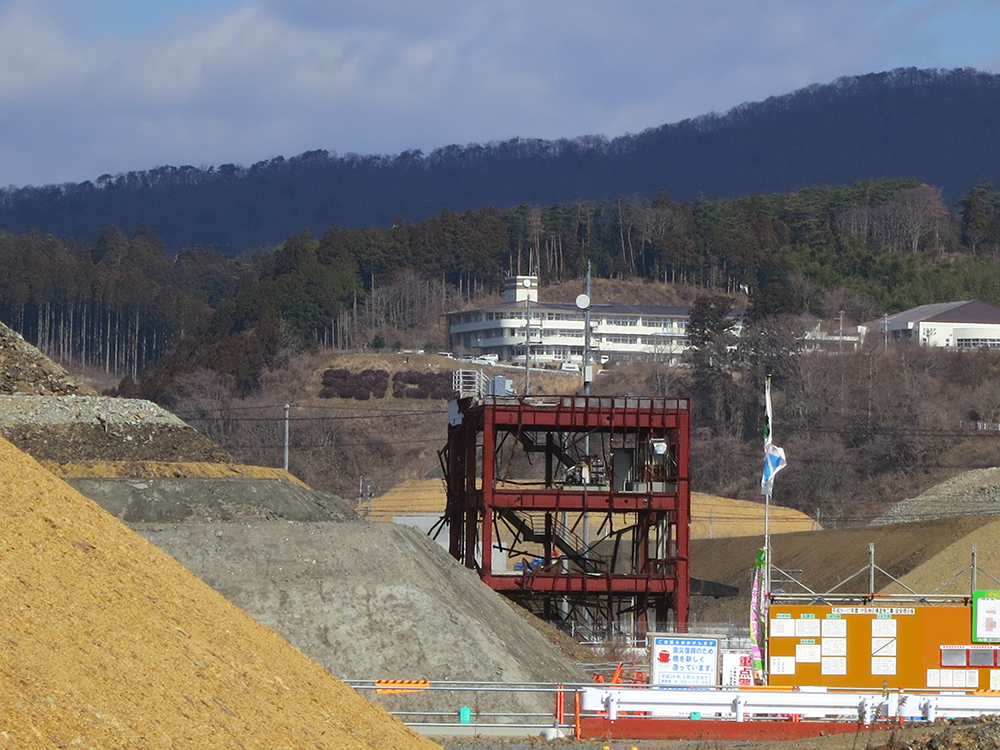 ocean. It was completely flat when we last saw it; only the skeleton frame of the Crisis Management Center stood there. Now, there were piles of earth, higher than the top of the center. The owners of a minshuku (private home) that we stayed at said the town, and others in the region, are raising the ground 8 to 9 meters as part of the rebuilding. The mountains of earth will be the ground level for the new section of Shizugawa, upon which roads and buildings will be built. En route to this section, we saw new homes in the higher areas further inland.

Minamisanriku is made up of two areas — Shizugawa and Utatsu. We spent a night in each area. In Utatsu, we saw that the temporary Izatomae Shotengai (shopping area), which we last visited in 2014, had been moved to a raised-up portion of land nearby. Thus we saw physical changes everywhere.

We had a delicious kaisendon (sashimi rice bowl) lunch at a shop in the Minamisanriku SanSan Village. Business was brisk while we were there.

After a night at a minshuku in Utatsu, I awoke early on the morning of March 11 and watched the boats heading out to sea from the nearby harbor to fish and harvest wakame (seaweed). We later drove along the beautiful Sanriku coastline to Onagawa. Many physical changes had taken place in the town proper. There appeared to be more fish processing facilities and other large buildings — definitely more then we remembered from two years ago.

Our first stop was the Onagawa Medical Center, which, although built on a hill, became a site of tragedy when people watching the tsunami from its perceived safe location were washed away when the water caught them from behind on the rebound from the inland direction. A monument was erected on the grounds of the medical center. There were also privately constructed memorials to some of the people who lost their lives in 2011.

From the center, you can see the new and well-designed Onagawa train station that reopened in 2015, the shopping “village” adjacent to it and the spacious Promenade. While at the shopping village that Friday, the 11th, we spotted former Japanese figure skater Miki Ando walking about with friends. We also spotted a film crew from a Tökyö news station with a well-known actor serving as commentator while visiting various shops. All in all, there was a good crowd of people browsing, eating and, like us, waiting for the 2:46 p.m. remembrance moment.

In Onagawa and all across Japan, people paused for a moment of silence at 2:46 p.m., the exact moment the earthquake struck northeastern Japan. A siren was scheduled to wail for one minute in memory of those who lost their lives in the largest earthquake to hit Japan.

We gathered at the Promenade at Onagawa Station to pay our respects. Hand-decorated bags put together by some young people had been arranged there. At 2:46 on the nose, everyone — construction workers in the distance, a news crew that been filming, the people around us . . . everyone — stopped what they were doing for a moment of silence. We all bowed our heads in mokutö (silent prayer) as the siren began and paid our respects in our own respective ways. Tears filled our eyes as we remembered that day and the hard days that had followed. It’s hard to explain why we wept, but I believe we come together in a shared human spirit when something as big as the Töhoku disaster happens and there is so much suffering, and loss, and courage, and determination.

Onagawa, Minamisanriku and the other communities on the eastern coast of Japan that were affected by the earthquake, tsunami and nuclear disaster of 2011 still have a great deal of rebuilding to do in order for life to be meaningful for its current and future residents. On this short visit we saw changes for the better in these two communities. We saw that life had begun again for fishermen, wakame harvesters, and shop and restaurant owners. We feasted on delicious seafood dinners at the two minshuku where we stayed, and we were moved by and honored to have been a part of the remembrance of an almost indescribable disaster from five years ago.

The coastline is beautiful here, something we from Hawai‘i surely appreciated. We had brought ribbon lei from Hawai‘i, which we left in Minamisanriku and Onagawa — small tokens of our aloha. Laura and I feel a connection to this place. We saw its people at their lowest, and now, five years later, we saw them back on their feet, soldiering on. We urge everyone in Hawai‘i to continue to support the communities of Töhoku with aloha.

Jon and Laura Ishihara were living in Yokosuka, Japan, when the earthquake rocked the Töhoku region of Japan on March 11, 2011. While living in Japan, they traveled to Fukushima, Miyagi and Iwate several times to volunteer their time and labor. They moved back to Hawai‘i in 2014, and Jon returned to his job at the Pearl Harbor Naval Shipyard. This was their first trip back to Töhoku since 2014. They continue to follow the recovery efforts via the internet.

The Hawai’i Herald … At Your Doorstep!