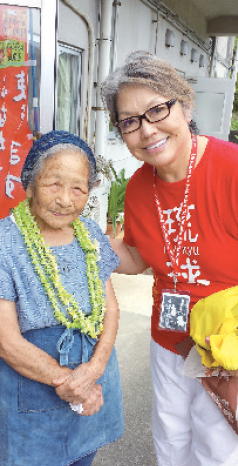 Japan) father, Toshio Nishizawa, I submit this essay with sincere gratitude for my Okinawan family, the Okinawan community and my adopted dad.

At the recent 2016 Hawaii United Okinawa Association installation banquet, attended by over 900 people, a Naichi friend of mine asked with amazement, “What is it about you Okinawans? You have so much spirit and pride for your culture! For decades, you continue to hold annual picnics and shinnen enkai that fill the ballroom; you run the largest cultural festival every year — and you seem to do it all with such joy.” I told him that while it is a lot of hard work, we do it with yuimaru — cooperation — and chimugukuru — heart and soul. That spirit has sustained us for generations.

Like my Naichi husband, some of these dear friends of mine call themselves “Uchinanchu wannabes” or “Uchinanchu-at-heart.” I love those labels! I’m sure our Issei and many Nisei could not imagine a time when people would look to us as a strong and positive force in the community, or witness an American of Okinawan ancestry being elected governor of our state, or seeing people of other ethnicities proudly wearing an “Uchinanchu wannabee” button! Ji-san would say, “Akishamiyo!” (OMG!) with a twinkle in his eye.

Some would credit this success to the organization of the HUOA, made up of 50 member-clubs with approximately 40,000 individual members. Others might say it’s the andagi (Okinawan doughnut) and nantu (Okinawan mochi) served at our meetings, the eisä drums that rev up our spirit or the awamori (Okinawan distilled liquor) that just makes us happy people. Actually, it could be a combination of all of the above, and then some.

All kidding aside, I believe our successes have come through adversity and challenges. As our parents and grandparents rose above them and became better and stronger, eventually, we did, too. Our people faced challenges for simply being who they were: Okinawan. While they struggled through it, they never taught us to hate or to retaliate. It is only fitting, then, that the least we descendants can do to honor their determination and grit is to overcome the pain of the past by building pride in our identity as Okinawans, reviving and preserving our culture and arts, and doing it with gratitude and humility.

In writing this essay, I learned that many of my fellow AJA Sansei have no knowledge of what life was like for our Okinawan Issei and Nisei as they settled in Hawai‘i. While they endured the same challenges faced by all immigrants to Hawai‘i, they were also painfully subjected to prejudice by their own countrymen, Japanese people, who looked down upon them. According to my mother, it was because Okinawans were different. They were not as refined as the Japanese and their language was not standard Japanese. Many of our people were pig farmers, and because they were butchers, they were considered low class to the Japanese. Additionally, their language, music and dances were completely different from that of the mainland Japanese. In those days, “different” was not as accepted as it is today.

“Okinawa ken ken, buta kau kau” is a phrase that many Okinawan Sansei know because our parents told us about their schoolmates’ hurtful teasing and bullying. Can you imagine how these young, good-looking teenage girls felt as they helped their fathers and brothers pick up buta kau kau (food scraps, or “slop,” to feed pigs) every evening at the homes of their classmates and endured such teasing the next day at school? As Mom would say, “We were so shame.” From this harsh experience, my mother taught us to always treat others with respect and kindness. This reminder of the Naichi-Uchinanchu relationship of the past is not made to point fingers. Rather, it is to show how understanding the past can inspire our present generations to live without resentment or ill will and create a better community through understanding and an appreciation of differences, as our Obaban and Ji-san did.

My mother and many other Okinawans existed in a world between shame for being Okinawan when amongst Japanese people, and immense pride when amongst their fellow Uchinanchu. The feeling of shame left an indelible mark on my mother’s life for many years. However, as time went on and our Okinawan Nisei and Sansei leaders came together to begin the work of overcoming that feeling of shame and instilling pride in our unique history, culture and language, this mark began to fade.

I can say with certainty that the Okinawan Sansei generation has gone beyond any of our ancestors’ wildest dreams. I believe it is due, in part, to our appreciation of their unique struggles and our strong desire for their struggles to not have been in vain. It is important to us, personally, to maintain pride in our unique culture and arts, as an homage to them. As a result, today our odori (dance), uta-sanshin (singing while playing sanshin), eisä, kobudo taiko (martial arts taiko), classical taiko, koto, Okinawa karate, shishi mai (lion dance), Shimakutuba and Uchinaguchi language classes, and cultural recitals and performances have grown in popularity by leaps and bounds. People of all ages, from 3 years old to 80-something, myself included, take lessons to learn odori or uta-sanshin or any of the aforementioned classes.

By our best guess, there are today over a thousand people enrolled in one or more of these classes taught by certified and highly revered sensei (teachers), many of whom are of our generation and from Hawai‘i or Okinawa. We are indebted to these sensei for their dedication and generosity. To our Sansei Japanese Americans and Americans of Okinawa ancestry, chibariyo, ganbare (Okinawan and Japanese words, respectively, meaning “persevere”) and “go for broke!”

Gwen Fujie was among the five people honored last November as 2015 Legacy Award recipients by the Hawaii United Okinawa Association.