Is it just my imagination or did 2015 end with a polarity not seen since America’s Civil War? Red vs. blue. Us vs. them. This religion vs. that religion.

Definitely didn’t feel united . . . almost like the segregated plantation camps of old Hawai‘i. Personally, I embrace the perspective of the late, great martial artist, Bruce Lee, who, when asked whether he felt more Chinese or more American, replied, “But under the sky, under the heavens, there is but one family. It just so happens, man, that people are different.” Or, as Braddah Iz once said, “It doesn’t matter if you black, white, brown, red, green or purple. We one race . . . the human race.“ So all of us have to come together, as we’re supposed to be the UNITED States. Just follow the lead of one of my favorite dining companions . . . the humble grain of rice. As Frank DeLima put it, “One grain by itself is nothing — just an embarrassing sticky white t’ing stuck on your T-shirt after lunch. But many grains together — that’s greatness!” Greatness to create the perfect starch in plate lunches or the perfect Spam Musubi!

How many of you have a kagami mochi in a place of respect in your home or office as you read this? Many families display kagami mochi every New Year’s Day. Some do it because the mochi itself symbolizes the mirror (kagami) that facilitated the sun goddess Amaterasu’s lighting of the world. Others do it because it’s the vehicle where the good luck gods reside during Oshögatsu, and still others do it because the mochi itself represents the family sticking together like the compressed grains of rice.

I have always had the symbolic kagami mochi displayed in my home on New Year’s. It used to be very elaborate, complete with hinoki (Japanese cypress) display stand, fresh wood fern from the yard and fresh mochi, topped with a fresh tangerine with exactly three leaves. I say “used to” be elaborate because the local supermarket, where I purchased the fresh mochi, stopped taking preorders several years ago. Unless you purchase mochi while it’s still warm, it hardens as it cools, so balancing the smaller mochi on the larger one becomes quite a challenge. Plus, the ambient moisture in Käne‘ohe usually facilitates mold growth, so by the third day, your kagami mochi usually sports a pronounced black “beard.” I’m pretty sure that a bearded kagami mochi isn’t good luck. Nowadays, I simply purchase the individually wrapped mini mochi housed in the plastic shell that resembles stacked mochi. Not authentic, but at least the mochi are still edible on the kagami biraki on the 11th day of the new year.

However, mochi is more than just a main ingredient for your New Year’s ozoni (mochi soup). Leftover mochi can be used for a dish I sampled at Dazoo in Pä‘ia, Maui, almost two years ago. For their Kalua Pork Stuffed Mochi, they completely wrapped their smoky pork with mochi, then pan-seared it and served it on a hoisin barbecue sauce. It was crispy on the outside and chewy on the inside with smoky porky goodness and a touch of sweetness from the sauce. Alas, Dazoo closed about a year after our only visit, so, like me, you’ll have to recreate this dish in your own kitchen. I’m sure you had lots of mochi for this dish on Jan. 2, 2016.

If you live in the 50th, you know that there’s only one type of rice: short and sticky, which is Oryza sativa, a derivative of the African rice, or Oryza glaberrima. It’s sticky enough to hold together for the ideal nigiri sushi or Spam Musubi, but not so sticky that you can’t create the perfect fried rice with the leftovers.

The Tatsumoto clan has always cooked our gohan “old school.” No micro-computer-controlled cookers, no induction cooking — just a standard aluminum rice pot with water measured to the first joint of your index finger. When I first dormed at the University of Hawai‘i, a roommate asked me to start the rice — I had to ask him how to use the electric cooker, because we never used one at home. Of course, as I’ve aged, I have morphed into a magpie for cooking devices — any shiny, new-fangled device catches my eye, including the Tiger 10 cup MICOM induction heated rice cooker with five-layer copper centric pot. This device really does shine with whole grain rice as well as flavored sweet rice dishes, like my Sweet Rice Dressing, which I highlighted in last month’s Gochiso Gourmet (Nichi Bei Weekly) column. Here’s the recipe.

1 can bamboo shoots, drained, then cubed approximately the same size as the lup cheong

1 can water chestnuts, drained and cubed as above

10 pieces dry shiitake mushroom, soaked overnight and then cut as above

Roughly 1 cup of peeled chestnuts cut as above

Wash the sweet rice and place in the rice cooker with the appropriate amount of water. Set aside. Cook the lup cheong over medium heat until it just starts to brown. You can either add the drippings or drain it on a paper towel if you desire less fat. Add the lup cheong, bamboo shoots, water chestnuts, shiitake and chestnuts to the rice cooker along with the Chinese five-spice powder and shoyu. Cook according to your rice cooker’s instructions. After the rice mixture is finished cooking and steaming, place it in a large mixing bowl and toss with the fresh chopped cilantro.

Oshögatsu just wouldn’t be complete without one of two customary beverages — my favorite rice-based beverage, sake, being one. The other is champagne. Good sake is said to have even more flavors and aroma than even the best cognac. How one simple grain of rice can produce a beverage with that level of complexity is astounding. And it isn’t just a marvel on its own — it also pairs remarkably well with a wide range of foods. I once sampled a junmai (pure rice sake) sake with blue cheese-stuffed celery — it was a remarkable pairing, so don’t only look to sushi and sashimi for your sake pairings. Most western dishes also are highlighted by the fermented rice.

According to tradition, the sake we consume as we enter the new year should not be just plain sake, but rather an herb-infused medicinal sake called otoso. Sipping otoso supposedly protects you from illness during the new year. If one family member sips otoso, the whole family is protected from illness; if your whole family sips otoso, then the whole village is protected. The herbs give the otoso a mulled cider-like flavor since there is cinnamon and peppers in the blend. It’s not my favorite beverage, but I still follow tradition. I prefer otoso to sipping the “cooking” sake that Mom kept in her pantry for ages, which Grandpa offered at the stroke of midnight, heated just south of the sun’s temperature.

SO, LET’S ALL STICK TOGETHER

So if rice can stick together, secured to Spam to form a perfect hand-held meal, or be pounded to create both traditional displays along with delicious dishes, or be fermented to produce exquisite nectars of the grain gods, why can’t mankind follow its lead for worldwide harmony? As the group War sang over 40 years ago, “Why can’t we be friends?” Sure, rice can’t solve the world’s problems, but at the very least, you’ll always have something good to eat and drink. To you and yours, Shinnen akemashite omedetou gozaimasu! 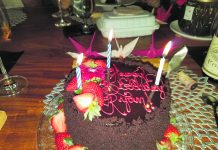 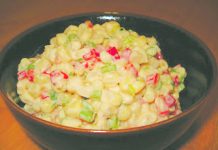