Editor’s note: We continue Michael G. Malaghan’s serialized historical novel, “Picture Bride — A Family Saga,” based on the Japanese immigrant experience. Malaghan’s trilogy takes readers from turn-of-the-20th-century-Japan to Hawai‘i in the picture bride era; the Islands during World War II, highlighted by the exploits of the Nisei soldiers; and beyond.

The novel begins with 12-year-old Haru-chan, fleeing her home in Amakusa, Kyüshü, for Hiroshima, where she becomes the picture bride of a Buddhist priest in Hawai‘i.

Author Michael Malaghan is a retired businessman who divides his time between Hawai‘i, Florida and Japan.

As the clip-clop of horses pulling wagons back to plantations and the cantering hooves of paniolo riding to their bunkhouses faded into the night, Sam guided his carriage down the road to Haru’s home. Her smile widened as she saw the glow in the windows of her house grow brighter. Kenji must have lit every candle and oil lamp, she thought to herself.

Kenji was standing by the roadside when Sam reined in his horses, his face pinched with worry. Sam took one look at Kenji and let out a low chuckle. “Reverend, your wife is now a legend; your mission in Waimea is assured of success.”

Kame did him one better. “Haru is a hero.”

“You’d better come in then,” said Kenji. Once inside he added, “I have never been so worried. The loud drums, the conch wailing and the ‘Banzai’ roars . . .”

“Wait ’til you hear what happened,” said Kame.

“Better to listen with bean cake and tea,” said Ualani, storming in from the kitchen carrying a tray filled with goodies to the dining room table. She immediately joined the others, sitting down as if to state, ‘I am not the new maid. I am the new member of the family who will help with the cooking and laundry.’ Haru confirmed the unspoken accord by picking up the teapot and starting to pour — Ualani’s cup first.

“I laid out the futon for your guests,” said Ualani.

“Do you think Mr. Carter would let me set up your house without bedding for guests?” Ualani said as more of a challenge than a question.

“Thank you,” said Kame, looking at Haru as if she had insisted on their staying the night. Knowing Haru would downplay her role in the evening events, Kame kept the floor. “Let me tell you what happened tonight.”

At the end of Kame’s narration, Haru decided to speak.

“Otosan, Kame told you what happened, but I want to tell you what I think we should do.” Then she told him about the sad-eyed man who had told her, “Send us wives.”

“You could tell the men in the back had decided among themselves who would approach Haru,” said Kame.

Ignoring this interruption, Haru gazed deep into Kenji’s eyes. “I remember what you wrote about how wives help to civilize plantation life on O‘ahu.” She turned her attention to Kame. “We can help.” She was just about to say, “We can write letters . . .” but realized that Kame’s education might not be up to the task. “Kame, you and I will work on a list of all the girls we know.”

“I will ask her to visit temples in the rural areas surrounding Hiroshima. Now that I think about it, my schoolmates won’t be attracted to the rigors of plantation life, but farm families will find new hope in Hawai‘i.”

Ualani, who was about to doze off, suddenly perked up. “You are not the only educated girl we need. The Parker Ranch has Japanese veterinarians. Waimea has shop owners and a lawyer, and you will want that too-lonely bachelor Dr. Goto to deliver your baby.”

Before Haru could say, “Of course,” Kame replied, “I heard a lot of my Okinawa dialect tonight and I know lots of farm girls,” she said, acknowledging the custom that Okinawans married their own, as did the men from Kyüshü, Hiroshima and Okayama.

Soft snores came from Ualani, who had nodded off.

Kenji stood up in agreement.

Haru looked at Kame’s eager eyes, and then to Kenji.

“We’re too excited to go to bed just yet. I want to work with Kame on the letter to wives and write to your mother before I go to bed.”

Heading for the bedroom, Kenji managed a sleepy, “Hai, Okasan.”

Ualani awoke at the scraping sound of the dining room chairs. Too tired for a spiffy remark, she said her “Goodnight” and waddled off to her room.

Alone with Haru, Kame said, “If you can write a sample letter, I can copy.” After working on the letter, Kame, who was finally sleepy, joined Sam on their futon in what Haru hoped would be their baby’s room by late summer.

Haru stared at the blank sheet. She had never written a real letter. She had so much to say, so much to ask. She had kept an occasional diary and followed that example. As her thoughts crystallized into introspection, the words flowed. She discovered that what she loved most about Hawai‘i was not the weather, or even Kenji’s assignment as a minister for Waimea, which she described. Rather, it was her excitement at finding purpose in her life. Haru related the evening’s events in a fashion that revealed her coming-of-age moment.

“Since I arrived at your door, you and Otosan have been preparing me to help others, as you helped me. I will do my best not to let you down. But I need some help, Okasan.” Then she wrote of the need for picture brides.

When finished, she was surprised at the number of pages she had written. Haru looked out the window — her spirits were warmed by the first glow of morning that enhanced the majesty of Mauna Kea.

Feeling guilty about missing her evening bath, she folded her letter, placed it in an envelope, and tiptoed into the bedroom. She looked at Kenji and wanted to tell him that life was good.

She slipped into bed and quickly drifted off to sleep. 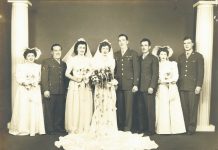