Mach Fukada’s pitcher plants look beautiful, but peer down the shaft of one of the slender green pipettes and you’re likely to see a struggling fly.

Tiny, downward-pointing hairs make it too slippery for the fly to climb out. A colorful leaf covers the entrance to the tunnel like a trap. Insect carcasses steeping in a dark pool of water below suggest a certain hopelessness to the situation.

Multiply the skirmish by several hundred plants and you suddenly realize why Fukada’s entire garden is buzzing.

In his job as an entomologist for the state Department of Agriculture’s Biological Control Section, Mach (think “Bach” with an “M”) Fukada studies the many insect pests that threaten to devour local crops and native forests. So it seems fitting that he would enjoy spending his free time communing with some of the plants that bite back.

Fukada has no idea how many specimens are in his collection of carnivorous plants (“I stopped updating the list,” he says), but he estimates it’s well over 100 species, including Pitcher Plants, Venus Flytraps, sticky Sundews and the slime-coated Butterwort (“Their Latin name means ‘little greasy ones,’” he notes).

Keeping the garden well-stocked with buckets of rotting watermelon to attract flies, Fukada’s fondness for pollinators leads him to free any trapped bees he might find. Spiders, however, he scorns as “freeloaders,” and if he catches any, he’ll feed them to his Venus flytraps.

Born in Kohala on Hawai‘i island, Fukada has been fascinated by science and nature for as long as he can remember. “I was flipping over rocks as a kid,” he says.

He might have inherited the passion from his grandfather, who worked as the farm manager for the University of Hawai‘i experimental station on Kaua‘i, and was a lifelong plant collector and horticulturalist, specializing in anthuriums. Fukada developed a particular curiosity about the complex relationships between plants and insects. He graduated with a degree in agriculture from the University of Hawai‘i at Hilo and went on to earn his master’s in entomology at UH-Mänoa. He joined the Department of Agriculture in 1998.

In his position, Fukada is something of an invasive species troubleshooter. “When we get a new pest in, my job is to find out information about it and how

is it going to affect the state,” he says. He learns about the species and investigates where it might have come from, how bad the infestation is, what possible threats it poses and what’s already being done to fight it.

Years of training and a natural eye for plants has given Fukada an uncanny radar for invasives. Cruising up Haleakalä Highway, he slows suddenly and veers to the side of the road before parking his truck and getting out. Half hidden in the harmless brush by the side of the road is a worrisome tumbleweed.

In small numbers, the thorny plant is little more than a nuisance for landowners, but en masse, tumbling tumbleweeds can accumulate against fences to create a fire hazard, or roll into highways and disrupt traffic. The weed used to be limited to dry parts of Kula, but lately, it’s been encroaching into Kahului.

“Just like fireweed, I see this stuff eventually becoming a problem that we’ll have to do something big-time about it,” he says.

Fireweed is just one of many pests that Fukada has seen put down roots in his home state. Now he’s helping to raise the moth larvae biologists hope will help keep the fast-spreading weed in check — raising the insects at his home in Kula will help them adjust to the Upcountry environment, he theorizes.

Even so, he has mixed feelings about using an introduced predator to keep an invasive pest under control, calling it “a strategy of last resort.”

“If we’re at a point where we’re looking at biological control,” he says, “all hope of eradication is gone.”

Dedicating his life to holding back an inevitable tide of invasive species, “does get discouraging,” he acknowledges.

“I see the whole situation like the Dutch boy with his finger in the dyke, but the water’s always coming over the top,” he says.

For the situation to change, he says, more people need to understand how everything in the environment is connected, and how their choices can have an impact. That’s where the carnivorous plants come in. Fukada sells some of his Venus Flytraps at the Kula True Value, where they’re popular with kids. He doesn’t make much money from the sales, but hopes to “infect young minds” with a love for the natural world.

Science in textbooks can be boring, he notes, but “the moment you’ve got something eating something else? Hey, it’s cool.”

Ilima Loomis is a freelance writer and editor. 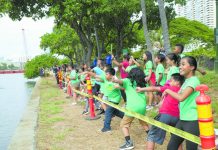 Lead Story – Yucky Ala Wai .. To Genki Ala Wai?