When Kiko Kanbara’s 5-year-old son, Haruto, is admitted to a prestigious kindergarten, Kiko is unprepared for the reality of this school.

High-end cars line up to drop their kids off, moms are dressed in fancy clothes, carrying brand-name bags and wearing heels and dripping with jewelry.

As a poor single mom, Kiko is out of her element. But her unpretentious nature and down-to-earth personality slowly begins to change the thinking of the other mothers.

An incredible group of Japanese-American soldiers in World War II changed the world and touched many lives with their dignity and honor. The 100th Battalion and 442nd Regimental Combat Teams were some of the greatest units in U.S. military history.

While many were on the battlefield, their families were incarcerated in internment camps simply because of prejudice. The bravery and patriotism of the Nisei soldiers earned them the Congressional Gold Medal.

Throughout most of the 20th century, Japanese immigrants to the United States and their children struggled to achieve stable communities, to make a living and to establish themselves as part of American culture. They faced discriminatory laws, financial hardship, out right racism, and — in the 1940s — imprisonment in U.S. government internment camps because they “looked like the enemy.”

“Honor and Sacrifice” is the story of one man’s journey from early hardship to an internment camp, and ultimately, to the stature of authentic American hero, based on his nearly unbelievable contribution as a member of Merrill’s Marauders.

A thrilling story about love and intertwined relationships.

Alex and Cindy find love and inspiration in each other’s arms. However, when Cindy leaves to study abroad, though devastated, Alex decides he must continue his life and pursue his dreams of becoming a photo journalist. Janice, an older woman, works as an editor-in-chief at a famous tabloid, but her successful career is not mirrored in her personal life. Despite her age gap and social differences their special friendship grows into an unlikely romance. Things get more complicated when Alex learns that Janice is Cindy’s mother!

Introduce yourself to the series by watching the “Oyaji Samurai Special” on Sept. 13.

One day, after drinking too much alcohol in a drinking contest, Kotoji fails to perform a major duty for his lord. As a result, he is released from service and becomes a wandering samurai. To avenge his lord, Kotoji comes up with a scheme to steal the lances (spears) that are the symbols of prestige for traveling processions of feudal families. He steals the lances of several families, which creates an unlikely alliance amongst them as they scheme to avenge their losses.

In the series, Kotoji’s desire to settle down and spend the rest of his days quietly continues to be disrupted by samurai seeking revenge for the stolen lances.

And as Kotoji finds himself picking up the sword again, he also deals with love and raising a child for the first time in his life, and begins to find a new meaning in life.

This is based on the true life story of Tokuzo Akiyama, head chef of the Imperial Household Ministry’s Cuisine Division from 1921 to 1989.

As a young boy growing up in the country, Tokuzo tastes a new food and this awakens his awareness and interest in cooking. Tokuzo goes to Tokyo and Paris to pursue the culinary arts.

Fighting against discrimination and prejudice, he becomes a chef at Hotel rits in Paris, the epitome of high society and luxury.

At the young age of 26, he rises to become the Emperor’s Chef in Japan.

Crimes today utilize increasingly clever tricks and techniques. The police and crime laboratories must respond to these crimes quickly and with scientific knowledge. The lab must deal with such diverse tasks as analysis of hair, blood type, DNA, voice pattern and handwriting, as well as polygraphs, the reconstruction of facial features, and superimposing. The lab forms the main stage for this drama, which follows a female lab agent as she goes about her work. Mariko Sakaki, the main character, practices forensic medicine at the crime laboratory of the Kyoto Prefecture Police Department.

The third season of “Doctor X.” Michiko Daimon is a freelance doctor who was dispatched to a university hospital who lost a number of doctors all at once due to harsh work conditions.

She visits an island. Due to an accident by a luxury liner, some of its passengers are injured. Among the injured passengers, she finds Ryonosuke who is an ex-hospital director, and treats his wound.

Hana Moyu means “burning flower,” and refers to the life of the main character, Fumi Sugi.

Fumi was the younger sister of Shoin Yoshida, who was well-known for inspiring leaders in the Meiji restoration. They were part of the Choshu clan from Satsuma Prefecture, which is the birthplace of many of Japan’s political leaders. Fumi was a strong supporter of her brother and his philosophies, and much of the Choshu clan’s success can be attributed to the foundation laid by Shoin and Fumi.

Playing the heroine Fumi is Mao Inoue, one of Japan’s up and coming actresses. “Hana Moyu” is the 54th Taiga drama from NHK.

“Noren” is the short curtain often seen hanging at the entrance to a Japanese business. This is a family drama about the laughs, tears, and battles between a mother-in-law, the madam of an old-style Japanese inn (ryokan) and her new daughter-in-law, that go on behind the curtain.

Naoko, a career woman working in Tokyo, marries the eldest son of a family that owns a distinguished traditional inn in Kanazawa. Naoko’s new mother-in-law, Shino, views her as an outsider and refuses to accept her.

However, when Naoko’s husband Sosuke abruptly disappears one day, leaving behind a large debt, Naoko tells Shino about her plan to work at the inn to pay off Sosuke’s debts.

Watase Tsunehiko plays the role of Torii Kazaburo, a detective who’s stuck in the data division of the Kyoto East Kamogawa station. He has the knack for solving cases that have turned up cold. His innocent looks hide a superior intellect that can store the details of old case files and help solve the unsolveable. You can’t hide anything from Watase-san!

The 11th season of this popular detective series.

Detective, Ukyo Sugishita, has great insight and cunning skills. His partner, Takeru Kanbe, is cool and confident. Together they solve many mysterious crimes.

Takako Hara has a history of failed romances and is resigned to a life of loneliness. At only 32, she is convinced she will be alone the rest of the her life.

That is, until Koutarou Ozu comes to teach at her school.

Although Takako is seven years older than Koutaro, she finds herself falling for him. What happens when she learns he is already engaged to be married?

Although Japan is a relatively small country geographically, each prefecture has its own traditions, dialects, and . . . foods!!! This program takes us to the secret places throughout Japan known to the people of the area and introduces us to things unique to each place. 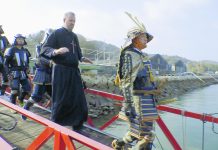 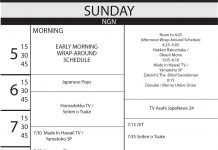