It has been 30 years since Hawai‘i and Okinawa were joined together as sister-states. That milestone anniversary was celebrated with a weekend of events, held July 10 through 12 at the State Capitol and the Hawaii Okinawa Center. They ranged from the signing of the Hawai‘i-Okinawa Memorandum of Cooperation for Clean and Efficient Energy Development and Deployment by Hawai‘i Gov. David Ige and Okinawa Gov. Takeshi Onaga, extending collaboration between the two island communities in pursuing clean energy alternatives, followed by an energy innovation forum in the House chambers of the State Capitol. A festive opening reception at Washington Place capped off the first day.

The celebration continued the next with activities marking the 25th anniversary of the Hawaii Okinawa Center, groundbreaking for the Hawaii Okinawa Plaza, a sister-state “roundtable” to discuss cultural issues of mutual interest and a performing arts workshop. An eisaa drum festival at the HOC closed out the packed weekend.

Thirty years after he formalized the Hawai‘i-Okinawa Sister-State Relationship, former Hawai‘i Gov. George Ariyoshi sat in the lanai of his former residence, Washington Place, watching a lively Okinawan dance performance. “I’m very happy,” he told me. “Makes me feel good,” he said with a smile.

The now 89-year-old former governor took a stroll down memory lane, recalling his decision to enter into the sister-state relationship with Okinawa. At the time, he was contemplating the establishment of sister-state ties with Fukuoka Prefecture and Okinawa Prefecture. Ariyoshi recalled that local representatives of the two kenjinkai had approached him, encouraging him to enter into relationship.

“But I told them that I did not want to participate in a relationship if nothing was going to happen after that. . . . So I told them if they’re going to put something together, I want to be sure that you all work very hard from the Hawai‘i side and from the other side so it can be a meaningful relationship [with] meaningful activities taking place. That’s why I decided. When I saw Governor [Junji] Nishime when he came from Okinawa and the Okinawa kenjinkai people, they were all gung-ho, and that’s why I went ahead and formed this relationship.”
Gov. Ariyoshi said his vision for the relationship was bigger than simply two island communities and a piece of paper. “To me, it comes down to a bigger question of the relationship between Japan and the United States. If leaders can meet and get together, they have good meetings, but that’s not enough. It’s important for the people of both countries who have feelings for each other.”

Ariyoshi’s term as governor ended a year after the pact was signed. Although he has been out of office for nearly 30 years, the former governor has watched the relationship flourish in areas such encouraging global perspectives among high school students; in higher education; business development; medicine and nursing; longevity; clean, renewable energy; agriculture; science and technology; culture; language; tourism and more.

“I felt very good, because in the case of the Okinawan kenjinkai people, they work very hard. They take trips to Okinawa and they do have the kinds of discussion that I think are very important.

“I’m not the person to judge what they do. I think what is important is that they go ahead and they keep on doing all of these things they feel are important. That’s what I wanted to happen,” he said. 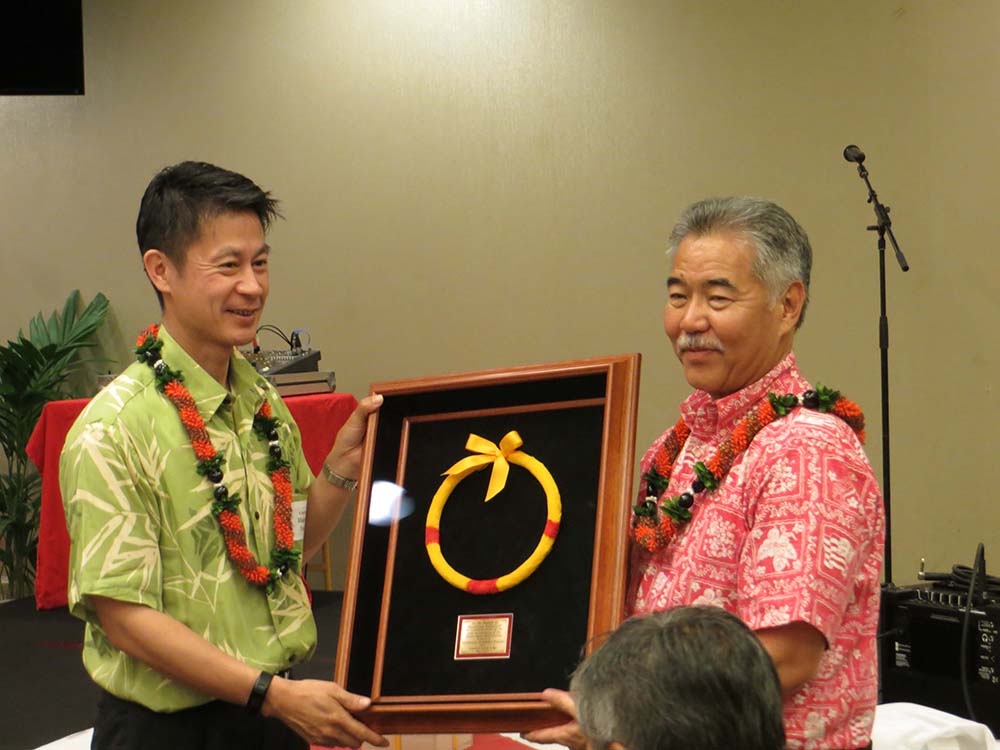 Confessions Of A Sanshin Sensei