“Here Comes Jang Bori,” Sunday at 6:30 p.m./
re-airs Monday at 1:45 p.m.
As a child, Bo-Ri Jang was adopted by a family without much money. She then learns that she is the missing daughter from a wealthy family. Bo-Ri Jang goes through the drastic change in her life and tries to become a successful designer of traditional Korean dresses. Meanwhile, the daughter from the wealthy family must live a different life with the family without much money. Lee Jae-Hee is an ambitious man.
Starring Yeon-Seo Oh, Yu-Ri Lee and Chang-Suk Oh.

“The Privileged,” Monday and Tuesday at 7:45 p.m./re-airs on Tuesday and Wednesday at 2:45 p.m.
The drama follows the daughter of a rich family as she tries to hide her status in society. Her dream is to find a man who loves her for who she is, but instead she meets a man who thinks love is just a tool that allows the rich to emotionally manipulate others.
Starring Joon Sung, Hyung Sik Park and Ji Yeon Lim.

“Run, Jang-mi,” Monday-Thursday at 10:25 p.m.; re-airs Tuesday-Friday at 12:20 p.m.
Jang-Mi has a warm personality which makes her kind to everyone. She is 26-years-old and a graduate student majoring in culinary arts. Her father is wealthy, but he dies suddenly. Jang-Mi’s life changes completely after her father’s death.
While Jang-Mi struggles to make a living, she meets a man who is the grandson of a food company president. They become involved romantically.
Starring Young-Ah Lee and Joo-Won Ko.

“The Mask,” Wednesday and Thursday at 7:45 p.m./re-airs on Thursday and Friday at 2:45 p.m.
Ji Sook Byun has always had a hard life with her father constantly going into debt and being chased by loan sharks. She desperately wants to know what life is like if she was born into a better family and didn’t have to worry about money all the time.
When a series of circumstances brings Ji Sook to Eun Ha, a woman from a wealthy family who strongly resembles Ji Sook, she grabs hold of the chance for a better life and assumes Eun Ha’s identity and begins to live her elite life. She meets Min Woo, a chaebol heir who is mistrusting of the people around him. But when he realizes that Ji Sook is not like the other women he has met, he is drawn to her. How long can Ji Sook keep up the charade and hide her true identity?
Starring Soo Ae, Ji Hoon Joo, Jung Hoon Yun and In Young Yoo.
“Blessed with Children,” Monday and Tuesday at 9:25 p.m./re-airs on Tuesday and Wednesday at 1 p.m.
The story of three daughter-in-laws — Ji-Ae, Yoo-Jung and Sae-Rom — and the drama surrounding the secret pregnancy of one of their neices.
Starring Soon-Jae Lee, Woo-Rim Seo, Dong-Geun Yoo, Hae-Sook Kim and Seok-Jin Ha.

“Jeong Do-jeon,” Wednesday and Thursday at 9:25 p.m./re-airs on Thursday and Friday at 1 p.m.
The new era of Joseon has started! Abuse of power and corruption made people to leave the government offices and only the corrupted people are left in the high offices. When there seem to be no hope, there are a group of young people who values the meaning of scholar heavily. They are the Sungkyunkwan scholars who have dreams to bring peace to the world and they were the hope of Goryeo. Sambong Jung Do Jun is one of them. He believed that the old corrupted government should be destroyed and the destiny of scholars is to build an idealistic country. This isn’t an ordinary revolution. Jung Do Jun’s meticulous plans for a new future will create a whole new civilization. A politician who will wipe away our tears, the story of his life and destiny unfolds.
Starring Jae Hyun Jo, Yi Suk Kang, Dong Geun Yoo, Young Kyu Park, In Suk Suh, Ho Im and Jae Mo Ahn.

“The Time We Were Not in Love,” Friday and Saturday at 7:45 p.m./re-airs on Saturday and Sunday at noon.
Ha-Na Oh and Won Choi are both 34 years old and hkave been friends since they were 17. Ha-Na is currently a career woman with an honest and confident personality. Won works as an assistant purser for an airline. He has always helped Ha-Na whenever she got into trouble. Seo-Hoo Cha is a pianist with a free spirit and So-Eun Lee is a cabin attendant for an airline. Will Ha-Na and Won find love?
Starring Ji-Won Ha, Jin-Wook Lee, Gyun-Sang Yoon and Soo-Hyun Choo.

“Fabulous Neighbor,” Friday-Sunday at 9:25 p.m./
re-airs Saturday and Sunday at 1:15 p.m. and Monday at 12:20 p.m.
Soo Rae Gong has only loved her husband since she met him as an teenager. She then learns that her husband is having an affair with Yi Kyung Choi. One day Soo Rae meets a nice man next door.
Starring Son Ha Yoon, Do Young Seo, Hee Suk Yoon and Tam Hee Park. 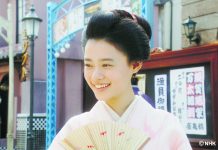 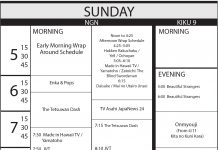 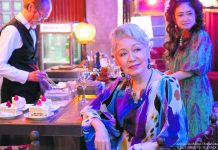