They stand unique in Hawai‘i’s landscape — the turtle-shaped Albert T. and Wallace T. Teruya Pavilion, and the Yeiko and Kameko Higa Building — the two buildings of the Hawaii Okinawa Center, the home of the Hawaii United Okinawa Association. This past June, the Hawaii Okinawa Center turned 25 years old. The buildings have lost some of their original shine over the years, but they are still beautiful structures, where the culture of Okinawa thrives and is celebrated in its people and activities.

In 2001, the late James Iha, then president of the HUOA, assembled a group of HUOA volunteers and asked them to produce a video documenting the history of the HUOA, previously known as the United Okinawan Association of Hawaii. The committee was made up of George Kaneshiro, Roy Kaneshiro (1982-83 president), Ken Kiyabu (1981-82 president), Cheryl Okuma-Sepe (2004 president), Lillian Takata (1999 president) and myself. At the time, I was working independently as a writer, editor and media consultant.

We met almost weekly for several months, mapping out the project and determining what to include and who to interview for this video. There was a lot of material to cover, especially given the role Hawai‘i had played in aiding the Okinawan people following the Battle of Okinawa. I became the designated interviewer and scriptwriter, with the other committee members joining me on interviews when their schedules permitted.

A good portion of the video was dedicated to the development of the Hawaii Okinawa Center, without question one of the HUOA’s greatest accomplishments. I was there in June 1990, when Issei Shoshin “Steven” Nagamine, founder of the Flamingo restaurants, and Chiyeko Takushi, a pioneer insurancewoman, representing the Issei generation, tugged on the maile lei, officially opening the Hawaii Okinawa Center. I still get chickenskin when I reflect on that day and remember the joy on the faces of the Issei. That day, they knew in their hearts that the cultural heritage they had brought from Uchinaa would live on in their children and grandchildren and the generations beyond.

Here is the story of the Hawaii Okinawa Center based on those 2001 interviews.

For decades, the Okinawa Memorial Hall at the Jikoen Hongwanji Temple in Kalihi had served as a gathering place for Hawai‘i’s Okinawans. But the community had grown considerably over the years.

Building a stand-alone Okinawan cultural center, or bunka kaikan, as the project was known in the early going, had been a long-held community vision dating back to the late 1970s when Okinawa governor Junji Nishime stopped in Hawai‘i on his return trip to Okinawa from South America. He asked United Okinawan Association leaders why Hawai‘i didn’t have a cultural center. After all, the first Okinawan emigrants had settled in Hawai‘i.
So in the early 1980s, architect Maurice Yamasato (1988-89 president) was asked to develop plans for an Okinawan cultural center. Yamasato consulted with several community leaders, including former state legislator Peter Iha, Times Super Market co-founder Albert Teruya and Stanley Takamine (1979-80 president), and came up with the first plans for a center.

But the plans remained just a drawing on paper . . . until the mid-1980s, when future president Edward Kuba traveled to Okinawa.

“In 1985 or thereabouts, I went to Okinawa and I visited certain of our friends and Okinawan government officials and, again, I mentioned the idea of an Okinawan center here in Hawai‘i. Our closest friend in Okinawa at the time, Kamesuke Nakamura, longtime president for the Hawai‘i club in Okinawa, said, ‘Ey, you guys come over here year after year and you’re talking about building a center. Nothing happens — the people here in Okinawa are starting to think that you folks are all mouth, no action — and that shocked me.”

When Kuba returned to Hawai‘i, he talked with Stanley Takamine and Gary Mijo (1983-84 president), who agreed to co-chair the project. Architect Yamasato went back to the drawing board and came up with plans for a bigger center, and UOA member George Uyema began working on the construction details. When Kuba’s term as UOA president ended in June 1987, he turned right around and assumed the role of fundraising chair for the bunka kaikan.

After studying population projections and land prices, the UOA found a parcel that they could purchase in fee in the still-undeveloped Gentry Waipi‘o area.

On March 16, 1989, a helicopter flew over the two-and-one-half-acre parcel bordered by Kamehameha Highway, Ka ‘Uka Boulevard and Uke‘e Street, dropping flowers from the sky as the United Okinawan Association of Hawaii broke ground on what is today the Hawaii Okinawa Center. 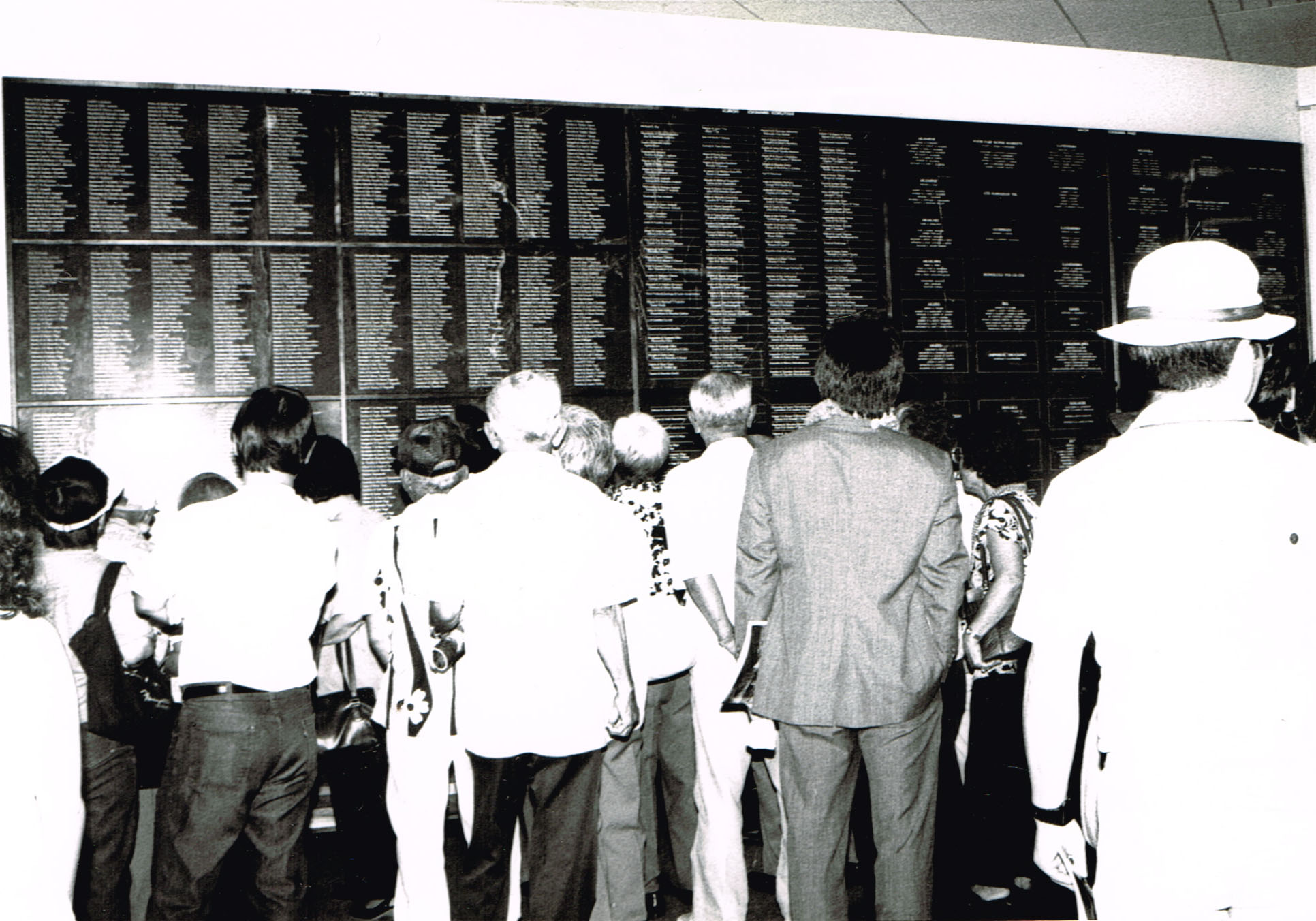 There was no turning back now on the dream for a home that would honor the sacrifices and fortitude of the Okinawan Issei and keep their children and grandchildren and generations beyond connected to the culture of their ancestral homeland. After several years of organizing highly successful Okinawan Festivals, the United Okinawan Association was up to the challenge.

The center had always been viewed not just as a home for the Okinawan community, but as a much-needed banquet and multipurpose facility for the Central and Leeward Oahu communities.

Jan. 7, 1990. In Hawai‘i, the Okinawan community opened the celebration marking the 90th anniversary of Okinawan immigration to Hawai‘i by honoring its past. Ninety years earlier, 26 immigrants had come ashore in Honolulu after nearly 10 days at sea. Tens of thousands of immigrants from the islands of Okinawa would eventually follow in their footsteps. Life was harsh and, oftentimes, so lonely. But they sacrificed and persevered. In the rich warm soil of Hawai‘i, the Issei planted sugar cane — and new family roots.

From the get-go, the year 1990 had been targeted as the year the doors to the Hawaii Okinawa Center would open to the community. Until that day, the bunka kaikan team worked at a feverish pace.

He said the project received an extra boost when Hawai‘i’s first lady at the time, Lynne (Kobashigawa) Waihe‘e, a sansei of Okinawan ancestry, agreed to serve as the project’s honorary chair.

A great deal of thought had gone into the timing of the center’s construction, Kuba noted. He said the plan had always been to build the center in memory of Issei generation. The surviving Issei were in their late 80s and early 90s. By then, their Nisei children were in their 60s and 70s and had the financial security to donate to the project. The Sansei brought their professional and organizational skills to the project.

When the fundraising campaign came to a close, Hawai‘i’s Uchinanchu community and their friends had demonstrated their support to the tune of $9 million.

Meanwhile, the two buildings of the Hawaii Okinawa Center were taking shape. Even when it was just a drawing on paper, Yamasato had envisioned having kawara, the traditional clay roof tile of Okinawa, grace the roof of the buildings. But the cost of the kawara far exceeded what Yamasato’s construction budget would allow, so he resigned himself to using American tile.

When he explained the dilemma to the center’s Okinawa supporters, Takehiro Ishikawa of the Marusangyo Company in Okinawa stood up and announced that his company would donate the tile for the center.

“This is the tile that we have right now on the building. And that’s the material that really represents Okinawa and gives the feeling of the whole complex being an Okinawan cultural center,” explained Yamasato.

The donation of the kawara tile was only one example of the outpouring of support from the people of Okinawa, who remembered how Hawai‘i’s Uchinanchu had aided them in the aftermath of the Battle of Okinawa.

In 1949, Akira Sakima, a Kalihi Valley hog farmer, and nine other Hawai‘i men took delivery of 700 milking goats in San Francisco and sailed with them to Okinawa aboard a military-chartered ship.

“The mothers needed milk for their babies. At that time, food wasn’t that plentiful and this is why they wanted to have milk for the mothers to feed the babies,” Sakima explained.

Just a year earlier, seven Hawai‘i men had taken 550 pigs that had been purchased with donations from the Hawai‘i community to Okinawa.

“We had to milk the goats twice a day, because if you don’t milk it twice a day, the goats get fever and they become sick. The ocean was rough — and most of us got seasick, especially me. . . . . When we reached Okinawa, after about 12 days, we were so happy to see the Okinawans on the pier, waiting for us,” recalled Sakima, who passed in 2007. He said Okinawa was devastated, even three years after the end of the war.

Sakima had one more job to do after turning over the goats to the Okinawans.

Before leaving home, Hawai‘i Uchinanchu had come by his home with envelopes for their relatives in Okinawa.

That mission changed Akira Sakima’s life forever and brought him closer to his Okinawan roots.

Nearly four decades later, when the United Okinawan Association embarked on its fundraising campaign to build the Hawaii Okinawa Center, Sakima (1972-73 president) was asked to go Okinawa to garner support from the people of Okinawa.

“People about our age at that time, which was about 60 years old, 65, they said we can’t forget you people. Now at that point, they were middle management or executives — they donated. They told me, ‘We’re going to donate, because you folks helped us when we really needed help.’ It really brought tears to our eyes,” recalled Sakima, who passed in 2007 after a lifetime of service to the community.

The first $150,000 pledge came from one of the founders of the UOA, Kamesuke Nakamura, who had returned to Okinawa and had started several businesses.

On the campus of the Hawaii Okinawa Center are two gardens that complement each other — the Issei Garden, honoring the community’s rich past, including a statue of Toyama Kyuzo, who is often referred to as the “father of Okinawan immigration to Hawai‘i,” and the Takakura Garden, symbolizing the community’s present and the future.

Both gardens are maintained by volunteers. In 2001, retired school principal George Nakasone was among the volunteers. He said working in the garden was his way of remembering and honoring a generation that sacrificed so much for people like him. “Not only my parents, but all the Isseis that I have known throughout my lifetime, recalling those days of getting together with them, not fully realizing what they have done to contribute to our quality of life.”

The Hawaii Okinawa Center remains one of Maurice Yamasato’s most visible projects as a practicing architect. “I feel like it belongs to the community and everybody had input in it and this is the result of it,” he said.

On June 16, 1990, a light rain fell over the Hawaii Okinawa Center — a Hawaiian blessing for the new home of the United Okinawan Association and Hawai‘i’s Okinawan community. The dream was now real. Close to 5,000 people — local Uchinanchu as well as supporters from Okinawa — came to help open the doors of their new home. The day was made even sweeter with the presence of many Issei, whose struggles and sacrifices were the cornerstone of the beautiful center.

“I walked on to the premises, hurrying to get to the grand opening, and I saw the 4,000 to 5,000 people that had gathered to attend the festivities, and I finally looked up at the center and said, ‘Where did this thing come from?’ The past four, five years before that, I was just too busy to really appreciate what we were doing. Seeing the center for the first time at the grand opening, I said, ‘Whoa, this is really beautiful.’ It was worthwhile. The challenge we had undertaken, we met.”