Before my mother died, she said something that left me with a nagging thought. “Don’t let me be forgotten,” she told the minister.”

What if all my ancestors in Hiroshima had said this, I wonder. What if my grandparents, or their parents, and their parents before them had said that, too? Even today, I know nothing about them, except for the surnames of my two grandfathers — Kakugawa and Takahashi. They have remained statistics without names or personhood. Until today, I carelessly referred to every member of my Hiroshima family as “my ancestors who were killed in the Hiroshima bombing.”

Today, as a result of Dr. Charles Pellegrino’s newly published book, “To Hell and Back: The Last Train from Hiroshima,” 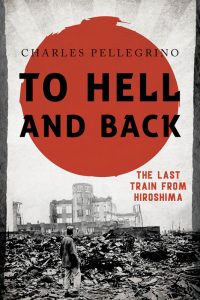 they have emerged from the shadows. My ancestors have become real people. They are children, teenagers, young adults, mothers and fathers and grandparents. They are now children who went to school on an empty stomach because the family’s war rations had run out, and mothers who would try to find forgiveness by leaving their special food at their children’s gravesite for the rest of their lives. All of them now have a voice.

The story begins in Hiroshima with the first flash of the atomic bomb and ends at Nagasaki and beyond. Approximately 300 people fled the smoldering city of Hiroshima, taking refuge in Nagasaki, not knowing what was to come three days later. Ninety percent of them were killed by the second atomic bomb. Only 30 Hiroshima refugees survived the Nagasaki bombing, thus becoming double survivors. One would experience radiation for a third time in Fukushima in 2011.

“To Hell and Back” is told through the voices of the survivors of the bombings. Pellegrino preserves that part of history with his forensic and archeological expertise, along with his poetic and masterful use of language. This is not a generic history, but rather a very personal and humanistic one. It is not a political story; it is a story of humanity. It is not a story of blame; it is a story of forgiveness and hope for our future children.

In 2010, Pellegrino published a riveting book titled “Last Train From Hiroshima,” which received some controversial feedback regarding one of the author’s sources. That feedback is addressed in Pellegrino’s new book. In spite of that, more survivors sought out Pellegrino to tell him their stories of survival — stories they had kept to themselves for 70 years. Their message was clear: What they experienced must not happen again. What happened to Hiroshima and Nagasaki must not be forgotten, ever, for the sake of our children. Fittingly, Pellegrino dedicated this new book to “Tomorrow’s Child.”

Each time Pellegrino brought forth the story of a child, a teenager, a mother or a father, I saw them as my ancestors — ancestors I hadn’t thought of as real people.

In Chapter 3, titled “Setsuko,” Akihiro Takahashi, then 14 years old, describes the people he saw that day. Pellegrino calls it “de-gloving,” whereby skin is burned away and only flesh remains. Takahashi bears many of these scars.

Twenty-five years later in Washington, D.C., Takahashi met the pilot of the plane that dropped the bomb on Hiroshima. Here is part of their conversation:

Pilot Tibbets sees the scars on Takahashi’s hands. “Is this the effect of the A-bomb?”

Takahashi acknowledges it, adding, “We must overcome the pain, sorrow, and hatred of the past — and {we must} work together to make sure that people never experience this again.”

Tibbets: “I understand, but I would have to do the same thing, under the same circumstances; because once war breaks out, soldiers can do nothing but follow orders.” Then closing his hands around Akihiro’s scars, Tibbets added, “We should never let war happen again.”

Takahashi later wrote: “Among humankind’s abilities, it is said imagination is the weakest and forgetfulness the strongest. We cannot by any means, however, forget Hiroshima, and we cannot lose the ability to abolish war. Hiroshima is not just a historical fact. It is a warning and a lesson for the future.”

My mother’s voice echoes back. I need to believe that Akihiro Takahashi was one of my ancestors. After all, my mother’s maiden name was Takahashi.
In Chapter 8, titled “Threads,” Pellegrino writes about Kiwamu, who survived childhood recruitment to Japan’s World War II uranium mines and another brush with radiation.

“Kiwamu had chosen, as his family’s place of refuge, the pristine-appearing fields of Fukushima. On March 11, 2011, he would suddenly come to a special unity of feeling with the Kakugawa family, whose members had departed Hiroshima ahead of the war, seeking the illusory peace of a farming community in Hawaii. To the west of Kapoho Village lay beautiful Pearl Harbor; and somewhat nearer, a sacred mountain that would one day bury the entire village beneath a lake of lava.”

The surnames are familiar ones in Hawai‘i — Sato, Sasaki, Doi, Fujii, Yamaguchi, Nagai, Yoshioka, and many, many more. But you need not bear the same name or be of the same ethnic background to find meaning in Pellegrino’s words. He speaks to humanity.

We are all familiar with the story of Sadako Sasaki and the 1,000 cranes she tried to fold before succumbing to the leukemia she developed as a result of the Hiroshima bombing. Sadako’s brother, Masahiro, asked Pellegrino to continue the legacy of his little sister. But he wanted those who lived to be remembered as “survivors,” not “victims.” Said Masahiro:

“I think Omoiyari is the best way to start. The worst way is to call ourselves victims. To say ‘victim’ requires a victimizer, and the victimizer is led to blame; and that starts the cycle of blame . . .”

“Sadako understood this theme more personally and more intensely than most people ever will. And she had only enough time to begin teaching anew what most of us have so easily forgotten.”

The survivors who shared their stories with Pellegrino are all adults. But their memories are from their childhood, so these are stories of children who survived. They are not pretty stories, but they are real and a part of our lives. As Pellegrino and the survivors propose, each time we act in kindness, we honor and remember our ancestors by helping to create a world of peace.

Thank you, Charles Pellegrino, for helping us to not forget all those who came before us.

And, to my mother . . . You, and all those who came before you, will not be forgotten, because of the Charles Pellegrinos of the world, who will painstakingly pick through mountainous piles of political and historical debris to bring us the human story of all our ancestors. We carry on this legacy of peace, forgiveness and human kindness in each one of their names.

Frances Kakugawa was born and raised in Kapoho on Hawai‘i island. She is the author of 12 books — many of them on caregiving and poetry writing for caregivers. Kakugawa also pens the Herald’s monthly “Dear Frances” column on memory-related illnesses and caregiving.