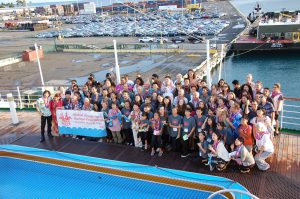 On July 12, a luxury cruise ship docked at Honolulu Harbor. Unlike other cruise ships that bring tourists to our Islands, Peace Boat carried not only tourists, but also eight hibakusha (atomic bomb survivors) and three youth communicators. Their mission: to spread a message of peace and the desire to create a nuclear-free world.

Peace Boat is a Japan-based international non-governmental and nonprofit organization that works to promote human rights, equal and sustainable development and respect for the environment. There have been 87 global voyages to date and eight “Global Voyages for a Nuclear-Free World.”

The latter voyage aims to spread the message of the humanitarian consequences of nuclear weapons. Since 2008, more than 150 hibakusha have traveled around the world for this cause. The 2015 trip, which was the eighth “Global Voyage for a Nuclear-Free World,” left Yokohama, Japan, on April 12. On its way to Honolulu, Peace Boat docked in Singapore, India, Greece, Italy, Spain, Portugal, Gonfreville L’Orcher, Ypres, Belgium, Poland, Sweden, Russia, Finland, Germany, Norway, Iceland, Venezuela, Panama and Guatemala. After leaving Honolulu, Peace Boat returned to Yokohama before continuing on to Hiroshima for the Aug. 6 events commemorating the 70th anniversary of the bombing of Hiroshima. From Hiroshima, it will travel on to Nagasaki for similar commemorative events on Aug. 9.

In Honolulu, Peace Boat activities included a performance of songs from “Peace on Your Wings,” an Ohana Arts musical that was inspired by the life of Sadako Sasaki, a 12-year-old girl who died from leukemia as a result of the atomic bombing of Hiroshima. Sadako became a symbol of hope and peace.

Author and poet Juliet Kono read from her novel, “Anshü: Dark Sorrow,” based on historical events, specifically the atomic bombing of Hiroshima.

Beatrice Cantelmo, co-director of Amnesty International – Honolulu Chapter, presented Peace Boat organizers with 100 cranes folded by Hawai‘i‘s houseless families in Kaka‘ako. “It shows that every skill level is needed and represents every skill and dexterity level,” she said.

Another speaker was Fane Lino of the Episcopal Diocese of Hawai‘i’s Pacific Islander Ministry. She brought with her youngsters from the Micronesian, Melanesian and Polynesian communities, whose families developed cancer as a result of the atomic bombing testing in the Marshall Islands and Tahiti (French Polynesia). She related a story of how a young child had to describe to his blind grandfather what the bombing in the distance looked like. “It’s better to be blind than see the great light that ends your life,” she said.

Not all of the 1,000 passengers aboard Peace Boat took the trip because they were interested in social issues or the Peace Boat’s mission, however. Some just wanted to travel. Throughout the voyage, however, there were activities aboard the ship that addressed issues surrounding the use of nuclear weapons and why it is important to put an end to them.

At night, the hibakusha and the youth communicators introduced films and presented songs and skits, testimonies, speeches, and readings about the atrocities and devastation to life and land, all caused by the atomic bombings on Hiroshima and Nagasaki.

At each port, they held similar events for the public and met with each country’s respective mayor or government officials, advocating for peace and the reduction of nuclear weapons.

The eight hibakusha who participated in the voyage were from Hiroshima and Nagasaki and were between the ages of 3 and 16 when the bombs fell. They are Masaki Hironaka, Soh Horie, Masao Ito, Takako Kotani, Shizuko Mitamura, Nobuo Miyake and Hiromitsu Morita. (Hiroe Kamada left Peace Boat prior to docking in Honolulu.) The youth communicators, who assisted the hibakusha in telling their story using their talents, were actor Akihiro Hashimoto, photographer and activist Keina Suzuki and musician/artist Manami Iwamoto.

One of the hibakusha, Soh Horie, was 4 years old when the bomb was dropped on Hiroshima. He was 3 kilometers from the epicenter and was shielded from the blast by his older sister. Now 74, he described the day’s events in English. Horie said he remembered a flash of light and the sound of the blast. He remembered the sight of people with badly burned bodies with their skin hanging from their bodies.

“There are 20,000 hibakusha still suffering from the aftereffects,” he said. “Peace is something wonderful and we should not take it for granted.”