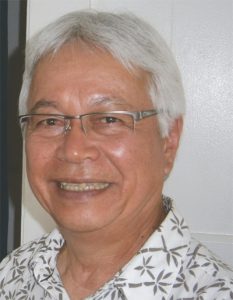 His interest was probably always there, a sleeping volcano growing up in a bicultural, bilingual home in which his Japanese grandmother, whom the Kimura keiki lovingly called “Baban,” spoke a Pidgin mix of Japanese, Hawaiian and English.

“My Japanese grandmother knew a lot of Hawaiian words. That’s how come when she spoke Pidgin to us . . . I thought they were Japanese [words]. But she was speaking Hawaiian,” he laughed.

Larry’s Hawaiian grandmother, his beloved Tütü, spoke to her grandchildren in her first and only language — Hawaiian.

The sleeping volcano roared to life when Larry began studying with Kahananui at Kamehameha and the direction and all the pieces of Larry Kimura’s life began to fall into place.

In the summer months, when he was back home in Waimea, working for Parker Ranch, he would spend time with Tütü. Hearing her speak Hawaiian was music to his ears.

Like many of their generation, Hisao and Elizabeth (Lindsey) Kimura encouraged their five children to get an education and aspire to “American Dream” professions that would take them away from the rural ranching life of Waimea.

After graduating from Kamehameha, Kimura returned to Hawai‘i island, able to converse with Tütü and his grandaunts and granduncles in Hawaiian. From them, he learned about Hawaiian culture, traditions, language and history, speaking in Hawaiian to improve his fluency.

Then he was off to UH-Hilo. The school did not offer any Hawaiian language courses, so Kimura majored in anthropology.

On weekends, he would drive home to Waimea to spend time with Tütü and the Hawaiian-speaking relatives of his grandparents’ generation. They had become his Hawaiian language professors.

In 1966, Tütü passed away. Larry was a sophomore at UH-Hilo at the time. “And within a blink of an eye, all the rest of my granduncles and aunts were dying, as well. And when they were gone, then I really missed them because there weren’t other replacements like them.”

After two years, he transferred to UH’s Mänoa campus to complete his degree in anthropology and came into contact with Dorothy Kahananui.

Kimura had planned to enroll in elementary-level Hawaiian language. “‘No, you don’t go into any of these elementary classes. You go right into third-year Hawaiian,’” she told him. So he did, although he sat in on the lower level courses to observe how Hawaiian was being taught.

In the summer of his senior year, Kimura began working with respected Hawaiian scholar Mary Kawena Pukui in the recording room at the Bishop Museum. Since the 1960s, Pukui had been recording native speakers in conjunction with her archeological and historical research. Pukui was getting along in years, but wanted to do one more interview project. Larry’s work with her introduced him to many native speakers of Hawaiian.

“With the language you’re naturally going to get closer to the culture,” he explained. “To me, the further back you go to the culture, the closer you get to the more traditional culture — not that I wanted to be a traditional farmer with my ‘ö‘ö digging stick and wearing a malo. I just wanted to learn more about that identity.”

Although younger generation Hawaiians were now speaking the language, it wasn’t the same, he said. “They were not of the same caliber, that same fluency and sophistication,” he said, noting that native speakers were raised in the language.

“They (elders) would say, ‘My goodness, less and less people are speaking it [Hawaiian],’ sort of bemoaning the fact that it’s dying away. . . . But nobody thought why shouldn’t we try and do something about it.”

The sadness over their resignation was something he could not shake.

After a stint in the Army, Larry returned to UH-Mänoa, where he began teaching Hawaiian language in 1971.

Several years later, he met two Polynesian students who were studying at the East-West Center — Tamati Reedy from New Zealand, and Sergio Rapu from Rapanui, a small Polynesian island off of Chile. Both were pursuing doctorates in linguistics. As Polynesians, Tamati and Sergio wanted to learn Hawaiian, so they enrolled in Larry’s Hawaiian language classes.

The three became good friends. Kimura would invite them to his family’s home on Hawai‘i island, where their conversations would always circle back to the language of their indigenous people. Neither of them expressed optimism about the survival of their respective languages. “And I guess Hawaiian was the worst of all in the predicament of survival,” Larry said.

After receiving his Ph.D., Tamati returned to New Zealand, and quickly landed a position as director of Maori affairs, similar to Hawai‘i’s Office of Hawaiian Affairs.

Fast forward to December 1982. Tamati was invited to keynote a conference in Hawai‘i. He asked Larry to set up some time for him to report on New Zealand’s efforts in reviving the Maori language.

Tamati told the group that they had begun teaching the language to Maori children wherever they could find space. Families were being encouraged to bring their children to marae, or cultural centers, where Tamati’s colleagues would teach Maori to the children. They were teaching them young, said Larry, “almost from birth” — from five weeks old on up to school age — and the movement was spreading like wildfire throughout New Zealand.

“That was the kick in our butt, I guess you can say,” said Larry.

The next month, Larry assembled a group of friends and former students who were now lecturers in Hawaiian language — people, who, like himself, had been lamenting the certain death of Hawaiian language.

“We gotta get together and do what we’ve been talking about for the longest time,” he told them. They had to do more than simply teach Hawaiian language to older people and UH students.

“We have to bring our language to our children, somehow,” he said.

Larry explained that the Maori word for a “language nest” is kohanga reo. In Hawaiian, the word related to kohanga is ‘ohana, or family.

The image of a bird feeding its babies through the mouth became a familiar image. “I used to see my mother and my grandmother doing that with the babies at home.” And so this small but determined group adopted the concept of a mouthful of language being fed into the ear. “That’s how native speakers become native speakers.”

Based on that, they called their group ‘Aha Pünana Leo, which is like the bird’s nest. ‘Aha Pünana Leo was incorporated in January 1983 as a nonprofit educational entity, with Larry serving as its first president. By 1985, there were functioning Hawaiian immersion preschools in Honolulu and Hilo. To this day, Larry remains on the Pünana Leo board.

“The concept is very basic,” he explains. “You speak the language to your children and that will be their language. Whatever you feed them — that is what they will speak.”

The Pünana Leo philosophy of immersing children in the language from almost birth has been a game-changer. It led to the creation of the Hawaiian language medium school, Ke Kula ‘O Näwahïokalani‘öpu‘u — or Näwahï — in Kea‘au on Hawai‘i island.

Larry’s Hawaiian language colleague at UH-Hilo, Professor William “Pila” Wilson, wrote about Näwahï in the Oct. 3, 2014, edition of the Herald. He explained that it is “the main laboratory school site of the Hawaiian language college at the University of Hawai‘i at Hilo and includes a preschool through grade 12 program that is taught, operated and administered totally in Hawaiian.” Some 360 students, mainly Hawaiian, but of other ethnicities, as well, were enrolled in Näwahï main campus in Kea‘au, as well as its satellite campuses in Waimea on Hawai‘i island and in Wai‘anae on O‘ahu.

“The mission of Näwahï is to restore Hawaiian as a living language of families and communities,” wrote Wilson. “In 1986, the state Legislature removed a ban that had been placed on Hawaiian medium education in 1896. Ninety years of English medium education had totally broken transmission of Hawaiian from grandparents and parents to children on Hawai‘i island. That break is beginning to mend.”

According to Wilson, approximately 33 percent of the children enrolled at Näwahï today have spoken Hawaiian from birth, and their parents either learned Hawaiian at Näwahï itself or at a university program.

Larry calls it a somewhat “revolutionary shift from simply teaching Hawaiian as a second language in high school and college.”

With all of his pioneering work in Hawaiian language — all work performed on the ground and in communities with real people, it boggles the mind to learn that Larry Kimura received his doctorate only three years ago.

He laughs and concedes that the process for earning his advanced degrees was “backwards.”

“You’re supposed to earn your degrees first to get hired, but not me,” he laughed. “I get hired first and then I get my degrees later.”

After four decades of dedicating his life to Hawaiian language, Larry Lindsey Kimura was finally awarded his Ph.D. in the revitalization of Hawaiian and indigenous language and culture in 2012. He is now a hope polopeka (associate professor) at Ka Haka ‘Ula O Ke‘elikölani — the College of Hawaiian Language — at the University of Hawai‘i at Hilo.

But it isn’t the certificates that bring joy to Larry Kimura’s heart. It is the sound of children laughing and playing, even arguing with each other, all in the native language of Hawai‘i.

Dolly Strazar retired as president and executive director of the Lyman Museum in Hilo, where she continues to reside.