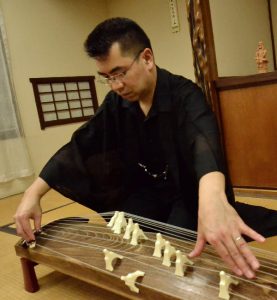 Hawaiʻi Public Radio’s acoustic jewel box, the Atherton Studio, provides the ideal sound environment to hear “An Evening of Japanese Koto and Shakuhachi Music” on Saturday, August 29. Darin Miyashiro, koto instructor at the University of Hawaiʻi at Mānoa, teams with Sandy Tsukiyama for classic and contemporary solo and duet compositions on the traditional Japanese 13-string zither. Their special guest is Chris Molina who performs on the Japanese bamboo flute, the shakuhachi.

Reservations for this final concert of the Atherton Summer 2015 season may be made online at www.hprtickets.org or by calling the station (955-8821) during regular business hours. Tickets are $30 general, $25 for HPR members, and $15 for students with ID. The Atherton Studio is located at Hawaiʻi Public Radio, 738 Kāheka Street. Doors open at 7:00 p.m.; music begins at 7:30 p.m.

Darin Miyashiro was born and raised in Hawai‘i. He began studying music formally at the University of Redlands where he received bachelor of arts degrees in music and Asian studies. He spent his junior year at Waseda University in Tokyo, Japan, where he was introduced to koto master Kazue Sawai and began studying under her and other masters at the Sawai Koto Institute in Tokyo. After graduating from college, he returned to Japan to continue studying classic and contemporary koto music at the Sawai Koto Institute, earning his instructor’s certificate in 1995. Since returning to Hawaiʻi, Darin has been active teaching and performing with the Sawai Koto Kai Hawaiʻi, in Hilo with the So-shin Kai, and participating in various local cultural events. He teaches koto in UH Mānoa’s Music Department and has performed in Washington, D.C.; Germany; Japan; and Okinawa. He is also currently pursuing a master’s degree in ethnomusicology at UH Mānoa.

Sandy Tsukiyama was born and raised in Honolulu, a granddaughter of immigrants hailing from all four major islands of Japan. Known to many as a vocalist and the host of HPR’s music program Brazilian Experience (HPR-2, Saturday, 4pm), Tsukiyama began studying the koto at age 16 with Kay Mikami, a student of Michio Miyagi. While studying for her BA in ethnomusicology at the University of Hawaiʻi at Mānoa, she continued under the tutelage of Mikami-sensei, who also lectured at the Music Department. Participating in many recitals and concerts of koto and jiuta (Japanese chamber music) trios, she went on to perform for numerous weddings and conventions, as well as events connected with the Japanese immigration centennial. She has often partnered with shakuhachi players John Kaizan Neptune and Riley Lee. Tsukiyama has also studied with Makiko Goto of the Sawai Koto Institute.

Chris Molina is a doctoral candidate in music composition at UH Mānoa. His work as a composer-performer combines world music and classical instruments, celebrating acoustic, jazz, and folk influences, as well as all things relating to the natural world. He performs internationally on the shakuhachi and is currently pursuing a master’s license with the guidance of Matama Kazushi, co-director of the International Shakuhachi Research Group “KSK” in Japan. His compositions and collaborative work are featured frequently throughout the US, Europe, and Japan.