Lee A. Tonouchi
Special to The Hawai‘i Herald

Editor’s note: Next Tuesday, June 23, Okinawa Prefecture will commemorate Irei no Hi — Okinawa Memorial Day. The day is observed in Okinawa only to remember the date the guns went silent after the three-month-long Battle of Okinawa. Approximately 200,000 people — 12,000 American military personnel, 94,000 Japanese and conscripted Okinawan military personnel and another 12,000 Okinawan civilians — died in the battle that began April 1, 1945, when American forces came ashore on the island.

In observance of Irei no Hi, contributing writer Lee Tonouchi, aka the Pidgin Guerilla, reviews “Descent Into Hell: Civilian Memories of the Battle of Okinawa.”

Wea all da books with da Okinawan points-of-view? Das da question I always asking when trying for learn more about da Battle of Okinawa. Probably da most famous firsthand account published in English is Tomiko Higa’s “The Girl with the White Flag.” That book’s been critically praised and readily available for years. But finding more books is kinda one challenge.

If you do one quick cursory search, seems like get ukuplanny firsthand-account books from da American soldiers’ points-of-view. Lotta these books stay self-published but, so you might have to apply your own editorial scrutinies.

You can even find da Japanese viewpoint represented, like in da book, “The Battle for Okinawa,” which wuz written by Col. Hiromichi Yahara, who wuz one Japanese officer during World War II.
As for da Okinawan points-of-view, if you super hardcore, you probably tracked down rare and out of print books like “A Princess Lily of the Ryukyus” by Jo Nobuko Martin, “A Mother’s Story of the Battle of Okinawa” by Junko Oshiro and even da handful of anecdotes found inside “An Oral History of the Battle of Okinawa: A Guide to the Okinawa Prefectural Peace Memorial Museum.” Besides those, maybe get da occasional story hea and dea, but is dat it?

So, you can imagine how stoked I wuz last year when “Descent into Hell: Civilian Memories of the Battle of Okinawa,” collected by da Ryukyu Shimpo newspaper wuz released. Even The New York Review of Books wen go recognize da importance of dis 486-page publication, writing: “What we learn from this profoundly disturbing and enlightening book is that tens of thousands of misled Okinawans died for nothing . . .” Da book wuz translated into English by Mark Ealey and Alastair McLauchlan and published by Merwin Asia Press.
So what dis book about? In da early 1980s, da Ryukyu Shimpo did one series in which dey sent their journalists for interview Okinawan survivors of da war for chronicle all their various wartime experiences. Prior to dis, many of da Okinawan people wuz reluctant for say anyting about that time in their lives.
In their Translators Notes, Ealey and McLauchlan write: “What appears as ‘Descent into Hell’ is a collection of articles mainly from the Senka o Horu series, plus our commentary on specific topics added in an attempt to provide a deeper level of context. To the greatest extent possible we want to let the translated articles tell the story, so our commentary focuses on highlighting key themes and giving further detail when necessary.”
For da most part, da Translators Notes serve as one introduction to each chapter. Some of da chapter titles include Evacuation, Education, Compulsory Mass Suicides, Student Soldiers, Excesses Committed by The Imperial Japanese Army, Internment Camps and American Excesses. Interestingly, these chapter introductions turn out for be my favorite, as well as my least-favorite, parts about da book.

In da “Education” chapter, da translators begin by reporting how, “As schools took on an increasingly nationalist flavor and classroom teaching adopted a similar military focus, such as math problems being created around calculating numbers of tanks, ships, and bullets. In physical education sessions, boys trained at throwing hand grenades and thrusting bayonets and bamboo spears into straw effigies of Churchill and Roosevelt. Girls practiced fire drills, and even the youngest school children were organized into groups to run around holding Japan’s national flag.”
So aftah reading all dis, it kinda sets up da expectation dat we going be getting a whole bunch of stories from da students’ perspectives. But most of da chapters stay about how Japan set up da educational bureaucracy for indoctrinate Okinawans into their political ideologies so dat any faculty who dissented wuz sent off to oddah places. It wuz also about how da educational system failed for prepare Okinawans for evacuation in da event Japan wuz going be losing da war. So had stories li’dat, but nomo no classroom stories.
In da chapter on “Compulsory Mass Suicide,” da translators give context to da chapter by mentioning how at one huge cave, “Shimuku-gama . . . the lives of over 1,000 people were saved because two local men who had returned to Okinawa after living in Hawai‘i persuaded the terrified locals that the Americans would not commit atrocities against them.” I heard of stories li’dis before, but wuz Okinawan American or Japanese American soldiers doing da persuading. Cuz I from Hawai‘i, I wanted for hear about who these former Hawai’i guys wuz, but that story’s not in dis book. All da translators provide is one footnote for their Japanese language source for da story.
Likewise, in da chapter about “Excesses Committed by The Imperial Japanese Army,” da translators report how da Japanese killed many Okinawan civilians under da pretext of being spies and that, “Anyone who had been in contact with the American forces or held a flier giving instructions to civilians on how to surrender ran the risk of summary execution.”
Da chapter intro goes on for list a whole buncha oddah Japanese excesses that range from things like stealing food from civilians to raping women, to silencing crying babies that might give away their location, to forcing civilians for go on suicide missions. We read a little about these things in oddah chapters, but for dis chapter, da main story is about da execution of one accused spy, but we no learn what she supposedly did. Da chapter also get one story about how wuz irresponsible of da Japanese for put civilian passengers and ammunition on top da same train and how da ensuing explosive accident could’ve been prevented. Den get one noddah really short piece about how Japanese soldiers hid under Shuri Castle, so das why Americans wuz forced for blow up dis Okinawan cultural symbol.
Da chapter concludes with one story about how one wife wuz trying for find out what happened to her husband during da war. Da husband, Eihan Teruya, wuz drafted into da Home Guard wea “Many older soldiers’ lost their lives simply because they had no idea what to do on a battlefield.” So, I suppose da reason dis story is in dis chapter is cuz of how it wuz atrocious for da Japanese army for put civilians in dis position, but like many of da stories in da book, I question whether it might’ve worked bettah in one different chapter. And so, once again, da chapter ends with different stuff from what seemed like wuz going be about.
In da chapter “Kyosei-Renko — Forced Migration of Korean Citizens to Help Japan’s War Efforts,” da translators report how, “Almost all of the ianfu were Koreans (a small number were Okinawan women), including young girls and mothers, tricked or kidnapped directly from Korea.” Da ianfu wuz da comfort women, and I always wondered if Okinawans served as comfort women, too. According to da context for dis chapter, dey did, but no more da follow up. For dis revelation in particular, da translators nomo no footnotes for even back up their assertion, which leads me for believe that unless dis common knowledge, maybe dey just speculating.
Da final chapter’s about “Psychological Impact,” but it contains no stories from da Ryukyu Shimpo series. It’s da translators’ two-page take on how “It goes without saying that in early postwar years, before modern aspects of mental healthcare were developed, no particular connection was made in Okinawa between wartime experiences and cases of psychological disorders, alcoholism, domestic violence and suicides. There was no formal system of counseling to help traumatized or psychologically scarred Okinawans; they simply tried to get on with their lives as best they could in the knowledge that everyone had been affected in some way.” Small kine letdown. It’s like saying yeah, get stories, but not in hea.

Even though it’s written in English, “Descent Into Hell” might still leave you unsatisfied unless you know how for read Japanese, too, cuz most of Ealey’s and McLauchlan’s footnotes stay from Japanese language kine sources. It seems like for every chapter, da reader gets fed one teaser, as in da chapter called “American Excesses,” where da translators report how, “Even in POW camps, the rape of civilian women was common, including in broad daylight, as Americans conducted ‘girl hunts’ through the rows of tents.” So den, nomo no stories about that and if you wanna know more, you gotta check da footnote and track down Masayasu Oshiro’s book, “Okinawasen no shinjitsu to waikyoku.”
Though really informative, aftah awhile, dis pattern gets annoying. It’s like, why mention if you not going tell da story in da book itself. With da vast wealth of supplemental information Ealey and McLauchlan provide, I no can help but wonder if maybe might’ve been bettah if dey just did one straight translation of da Ryukyu Shimpo series of articles, den used all da new information along with sa’more research for write one whole separate book, or maybe several books, even.

Lee A. Tonouchi stay da author of “Significant Moments in da Life of Oriental Faddah and Son: One Hawai‘i Okinawan Journal” from Bess Press. His play, “Echoes of Dat Red Guitar,” is currently being staged by Kumu Kahua Theatre.

Featured Story – GETTING TO THE ROOT OF BENI IMO 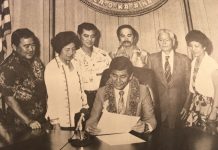 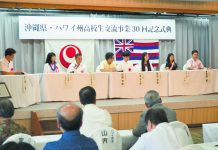