Whether she realizes it or not, 86-year-old Aiko Nakaya has lived this saying for half a century.

For the past 50 years, Nakaya has taken her love for dance throughout Kaua‘i. She not only teaches bon dance to the congregation of West Kauai Hongwanji, but also teaches dance and Japanese crafts to Kauai’s senior community, helps dress dancers in kimono at bon dances and, oh, did I mention that she is also president of Kauai Shinbuyo Kai, a dance club?

But you’ll never hear Nakaya complain about her busy schedule, because that’s how much she loves dance. “Any kind of dance, I enjoy. I like to watch any kind of dance performance,” she said. “With dancing, no more stress.”

Born in Sapporo in Hokkaidö Prefecture, Nakaya did not take formal dance lessons at all as a youngster. “We learned simple kind of dances, but right after that [World War II] started and no can,” she said. A few years after the war ended, she began taking lessons from her cousin, Hanayagi Chizuharu, in Japan, but then she married Mitsuru Nakaya, a Military Intelligence Service officer during the war.

Mitsuru, the eighth of nine children, wanted to return to Kaua‘i to help his siblings care for their aging parents. So, the couple moved to Kaua‘i, where they raised four sons. Mitsuru worked for the Gay & Robinson Plantation as a carpenter, and Aiko worked at Kaawanui Store in Camp 6 in Kaawanui. When the owner retired in 1968, the Nakayas bought the business and Aiko ran the store. After 18 years, they closed the store and Aiko became a tour guide for Kauai Island Tour, where she worked until her retirement in 1994.

Nakaya was in her 40s when she began formal dance lessons. In 1980, Rev. Kogaku Miyoshi of Kauai Soto Shu formed the Kauai Japanese Cultural Society and a dance group, Kauai Shinbuyo Kai, with Nakaya serving as president.

Dance lessons were conducted by Hanayagi Miharu-Sensei (Margaret Nekota), who flew from O‘ahu to Kaua‘i to teach. After Miharu-Sensei passed away, Hanayagi Harukazu (Linda Kaneshiro) continued teaching for a while.

Nakaya then took over as an instructor, teaching the students what she already knew.

“We just practice on our own. We learned over 100 songs, so for the young students, everything is new.”

“We started out with about 30 students, but the younger ones weren’t interested or are too busy,” she says of the group, which now numbers around 13 students.

In 1995, she began teaching dance to Kaua‘i’s seniors. 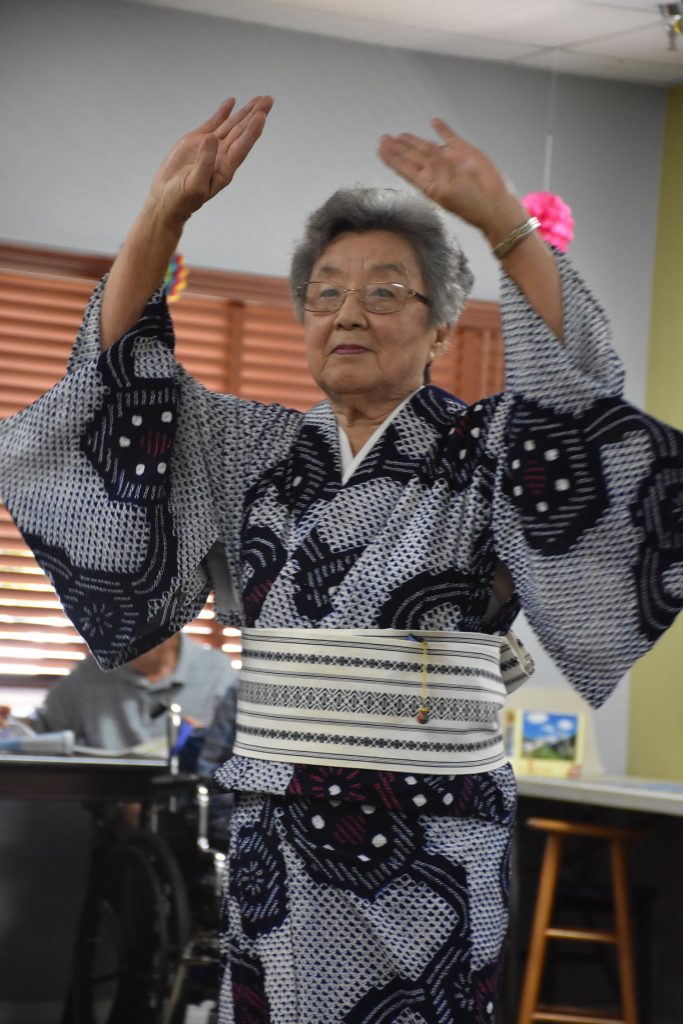 “They [county] called me and asked me to teach. After my husband passed away (in 1994), I wasn’t doing anything, so my friend told me I should teach,” she said.

As time went on, a lack of students at Waimea prompted a merger with the Hanapëpë class. The 45-minute commute from her home in Makaweli took a toll on her, so Nakaya had to stop the Lïhu‘e class. She currently teaches bon dance, origami and simple Japanese sewing crafts at the Kekaha Senior Center and only bon dance at the Hanapëpë Senior Center.

In preparation for bon dance season, which runs from June through August, Nakaya, who is a member of the West Kauai Hongwanji, began teaching bon dance to the congregation. Classes for members started in February and were opened to the public in April and May. The public classes have over 60 attendees.

When teaching bon dance, Nakaya does not choreograph her own songs. “I only teach what I learned before. There’s an instruction kit [that I follow], but if it’s too complicated, I simplify it,” she said.

She also teaches bon dance to a group of men who wanted to start their own bon dance club. They call themselves “Koi Dynasty.”

Asked if it’s easier to teach young children or seniors how to dance, Nakaya said youngsters, “more fast to catch on.” With the older group, one song takes almost one month. “They only come [to class] once a week, so it’s hard to remember, but that’s OK. They enjoy themselves. They keep active.”

She doesn’t have any younger students, but because the senior classes are held at the community center where Summer Fun programs are held, the kids watch and sometimes participate. “Sometimes they join in. They like the lively songs. It’s good fun,” she said.

Kaua‘i’s bon dance community is a very close-knit bunch. Nakaya is such a fixture at the weekly bon dances that her presence is almost mandatory. She attends both nights of each temple’s bon dance and used to fly to O‘ahu to attend bon dances. “Once I had a party to go to and I couldn’t go to a bon dance. Everyone kept calling to see if I was OK,” she said.

In addition to dancing, Nakaya helps to dress the dancers in kimono. She learned the intricacies of kimono dressing from Jean Sakihara, founder of the kimono program at the University Laboratory School, who used to come to Kaua‘i to dress the dancers.

And dance isn’t the only thing Nakaya does. She also sings Iwakuni Ondo, which is Iwakuni Prefecture-style singing. During a normal bon dance, the night is broken down into sets of pre-recorded music that alternate with live performances. The live musicians perform for about 15 minutes in Iwakuni or Fukushima Ondo-style. Nakaya says there used to be regular singers, but that number has dwindled significantly, so she fills in.

“There’s me, another lady from Japan and an older Japanese man [who sing],” says Nakaya. “I want some other people to come in so I can retire,” she said with a laugh.

In 2007, Nakaya was honored as a Living Treasure of Kaua‘i in the arts category by the Kaua‘i Museum for her efforts in promoting Japanese culture through dance. The awards, which are presented in odd years, honor individuals, who, according to its website, “Through their efforts of volunteering, teaching and preservation . . . give back to the communities, which have provided for them.”

Nakaya’s energy is boundless and contagious. Before leaving her, I asked if she plans to keep dancing until she can’t dance anymore. “I think so,” she said with a laugh. “My doctor tells me, ‘Don’t quit. You’re in good health. Keep going.’”