At age 31, Yutaka Kochi Yoshida was one of the older Hawai‘i AJAs to volunteer for the 442nd Regimental Combat Team in 1943. Today, at 103, he is among the oldest — if not the oldest — living 442nd veteran. The modest World War II veteran and retired physician turned 103 years old on May 10 and continues to enjoy life.

Yoshida was born in Waipahu in 1912. World War I was still two years away when he came into the world. His family lived in Stable Camp, a small plantation camp named for the horses and mules that were housed there. Yoshida’s father was the mule driver for Oahu Sugar Company, working with a gang that laid down the temporary tracks in the cane fields so that the harvested cane could be transported to the mill.

Yoshida attended school in Waipahu through the eighth grade. He remembers that all of the kids walked to school barefoot — sometimes they wore zori (slippers). But on the day he graduated from grammar school, his father told him he had to wear shoes.

Since there weren’t any high schools in rural O‘ahu at the time, he decided to attend McKinley High School in “faraway” Honolulu. Every morning, Yoshida would catch the Oahu Railway train from Waipahu to the Iwilei station and then hop on the trolley to McKinley. Like most kids, he learned to jump off the trolley before the conductor came around to collect their fare.

After graduating from McKinley in 1930, Yoshida worked in the laboratory at Oahu Sugar Company, thinking he would become a chemist. He earned $1.25 a day for a 10-hour day, which, subsequently, was increased to $1.75 a day. After working in the lab for three years, he decided that a career as a chemist wasn’t for him.

After leaving Oahu Sugar, he joined the Honolulu Police Department, where he was paid substantially more — $135 a month. Yoshida still remembers the stern advice of his chief upon completing his training: “Always pay for your own lunch.”

“They used to have cockfights all over the place. Part of the police recreation was to raid them. When they had these cockfights down in the panini open fields, there would be hundreds of guys, mostly Filipinos, but when you raid them, can only catch a few. The gamblers would pay a $25 fine and then next week, they’d be right back. Nobody had hard feelings about them.”

In 1938, at around age 26, Yoshida enrolled at the University of Hawai‘i as a part-time student, taking 12 credits at a time. He was considering a career as a physician. His dream was dashed, however, with the outbreak of World War II.

His job on Dec. 7, 1941, was to accompany FBI agents as they rounded up prominent members of the Japanese community throughout Honolulu. Yoshida recalled the arrest of a Nishi Hongwanji Temple priest. Although it was his job, he is still pained by the memory of having to point his gun at the small-framed elderly Issei priest.

He said martial law had its benefits for the police, as it kept people indoors at night. “No patrolling to do because all the crooks had to stay home, too.”

In March 1943, at the age of 31, Yoshida answered the call for volunteers for the 442nd Regimental Combat Team. The unit was sent to Camp Shelby in Mississippi, where they trained for over a year. Yoshida was assigned to “H” Company, 2nd Battalion.

He was promoted to section sergeant with responsibility for two squads of heavy machine gunners. The water-cooled weapon weighed over 100 pounds. Fortunately, it could be broken down into two main parts and carried by several men. One soldier carried the tripod, another carried the gun, a third hauled the water to cool the gun and four others carried the ammunition.

The 442nd deployed to Europe on May 1, 1944. After stopping briefly in Oran in North Africa, they shipped out to Naples, Italy, which, by then, was in shambles, and finally to Civitavecchia, north of Rome, where they were joined by the 100th Infantry Battalion, which had been in combat in Italy since September 1943.

The 442nd entered battle for the first time on June 26. Yoshida was wounded in the second week of July while fighting in the small village of Scopeto. During the battle, a German tank gunshell hit the edge of his foxhole. The shrapnel hit his left shoulder and right leg. Yoshida was carried to a battalion aid station, where his wounds were wrapped with sulfur powder. He was then driven all night to a hospital, where the shrapnel was removed during an operation. Yoshida awoke to find his leg in a cast. He was then flown to the 12th General Hospital near Rome, where he spent the next four months recuperating.

Yoshida was presented a Silver Star, although he questions why he received it. “Well, somebody got me the medal, but, you know, I don’t know what I did and I didn’t believe what they wrote. They said that I was directing the fire at the enemy and that kind of stuff. Hey, you don’t want to talk about that kind of stuff.”

By December, Yoshida was well enough to return to his outfit, which was now in Epinal in the Vosges Mountains of northeastern France. He was among the replacement troops for his old outfit, which had been decimated in the mountains. They were sent up to the Maritime Alps for a few months and, in March, were shipped back to Livorno.

On April 5, 1945, they began the treacherous climb up the mountains north of Azzano to attack the Germans, the start of the Po Valley campaign. “So, halfway up the hill, this mortar shell lands and knocks the captain of our company out, and also the lieutenant of the 1st platoon, and three or four black soldiers from the 92nd Division. I was knocked down flat on my face because I was talking to the captain and my helmet went rolling down the hill. But I was the only guy not injured by the blast and so I took care of the captain. And, lo and behold, they gave me a medal (Bronze Star with Oak-Leaf Cluster) for that.”

A short time later, he was recalled from the hills to attend Officer Training School, which was conducted by the 5th Army near Caserta. On July 14, 1945, Yoshida was commissioned a 2nd lieutenant and assigned to Co. I of the 3rd Battalion. By then, victory in Europe had been declared. Two months later, Yoshida was discharged from the service. He returned to Hawai‘i in late October.

By then, Yoshida had decided on a career in medicine. Dr. John Payne, a chemistry professor at the University of Hawai‘i, suggested that he enroll at the University of Cincinnati, where some of his friends could help him. Yoshida took Dr. Payne’s advice and, in January 1946, enrolled at UC since he needed to take more pre-med courses. He also applied to the medical school. Yoshida said he would visit the medical school admissions office every month to see how his application was progressing. In time, the secretary got to know him and was prepared with her answer. “They’re processing it,” she would assure him.

Yoshida finally got to meet with the admissions committee and was advised to take organic chemistry that summer. He took their advice and was accepted for the fall freshman class.
After four years, Yoshida graduated from the University of Cincinnati Medical School and returned to Honolulu to intern at the Queen’s Hospital. He was planning to remain at Queen’s for his surgical training, but on the advice of Dr. Joseph Strode, the leading surgeon in Hawai‘i at that time, returned to the Mainland for his general surgical training at the Dayton VA (Veterans Administration) Hospital for another four years.

Yoshida returned to Hawai‘i in 1955, ready to start his practice in general surgery. He was 43 years old at the time and in the prime of his life. A board-certified surgeon, Yoshida practiced medicine for the next 35 years.

He and his wife Marge, whom he met while in medical school, were married for well over 60 years and raised two children together. Marge died eight years ago. Their daughter Ann lives in Chicago with her two children, and son Ken lives in Honolulu.

In his spare time, Yoshida took up tennis, playing at the Beretania tennis courts and amassing a shelf full of tennis trophies. He was forced to give up the sport a few years ago when his hips gave out, but he’s still an “honorary member” of the Beretania courts.

When his playing days were over, Yoshida developed a new interest — learning all he could about the Civil War. He also raises water lilies and hybrid hibiscus.

Who would have thought that a barefoot kid from Stable Camp in Waipahu would accomplish so much in his life — and at 103 years old, he’s not done yet. No one disagrees with Yutaka Yoshida when he says, “I’ve had an interesting life . . .”

Dr. Michael Okihiro is a retired Honolulu neurologist. He previously wrote about sports for the Herald. He’s now turning his attention to writing about the unsung heroes of his beloved community — Käne‘ohe. 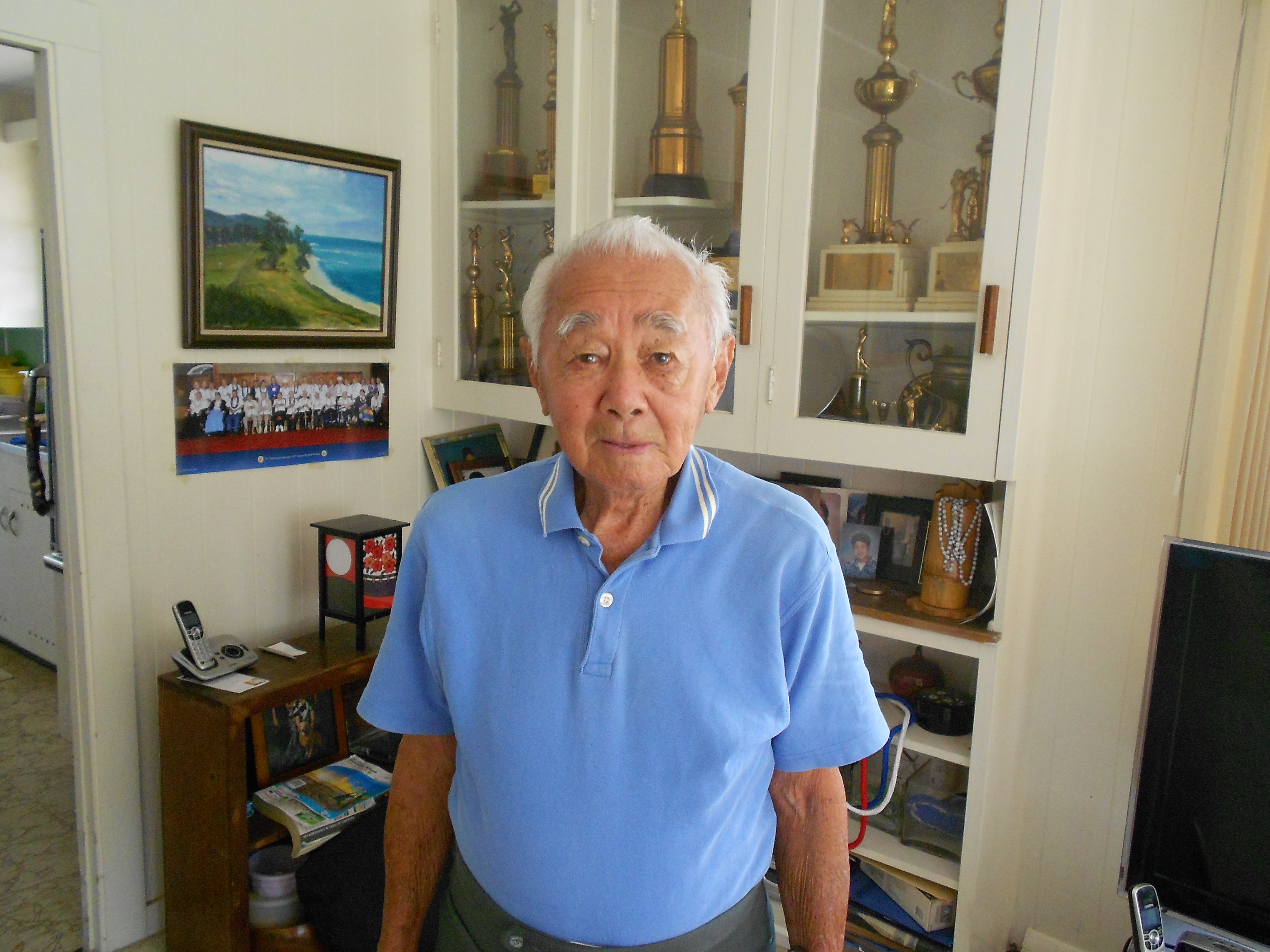