In the closing days of April, I watched with great interest the PBS programs commemorating the 40th anniversary of end of the Vietnam War. I was in high school and at the University of Hawai‘i’s Mänoa campus during the Vietnam years and was just beginning to earn my own living when Vietnamese refugees — “Boat People,” they were called — began arriving in Hawai‘i. Even now, all these decades later, whenever I see the name “Nguyen,” or “Thuy,” or “Tran,” or any other Vietnamese surname, I’m curious to know their story, especially if the name is preceded by an all-American one like “Nancy” or “Robert.” How it is that they are in Hawai‘i, I wonder.

I was especially interested in the program, “Last Days in Vietnam,” which aired as part of PBS’ “American Experience” series. Back in 1986, I had interviewed then-ABC News correspondent Ken Kashiwahara, who was born and raised on Kaua‘i until the age of 10. Kashiwahara was an ABC correspondent in Vietnam during the war years and was in Saigon — today Ho Chi Minh City — when it was overrun by the communist North Vietnamese in April of 1975.

As I watched the program, which was produced and directed by Rory Kennedy, I thought back on my 1986 interview with Kashiwahara. He was there, at the U.S. Embassy in Saigon, along with the mobs of South Vietnamese who were trying desperately to get on any one of the U.S. military planes or helicopters to flee their homeland. He remembered Americans and Vietnamese alike climbing over the embassy walls to get on to a chopper that was airlifting South Vietnamese to American ships anchored offshore.

“As we pushed our way through the crowd, I saw American Marines on top of the walls, kicking the Vietnamese who were trying to climb over,” he said. “As I saw the American boots being shoved into Asian faces, I thought looking the way I do had finally caught up with me.” Up until that point, having an Asian face had enabled Kashiwahara to escape much of the anti-American sentiment that had been building up in the weeks leading up to the fall of Saigon. But it appeared Kashiwahara’s luck had run out.

“I panicked, trying to think of some way of letting those Marines up there know that I was an American. In my frantic state of mind, I made a snap decision. If, as I reached for the Marine, I saw him giving me the boot instead of a helping hand, I would yell as loudly as I could, ‘The Dodgers won the pennant.’” No Vietnamese would know that.

It was not uncommon at all to hear stories of Vietnamese mothers or fathers handing off their young children to Americans who were total strangers, so that, hopefully, that child would have a chance at life in America . . . even if they never saw their child again. It was the ultimate act of love.

Kashiwahara told me another story — this one incredibly tragic and sad. In the hours before Saigon fell, Kashiwahara saw a Vietnamese man with his baby in his arms, running alongside a crowded bus that Kashiwahara was on. The man was crying out to driver in Vietnamese: “My baby, my baby . . . take my baby.” But the man stumbled and fell, and Kashiwahara watched horror-stricken as the wheels of the bus ran over the baby, killing it instantly.

Watching that documentary and seeing the tens of thousands of Vietnamese who fled the country with only the clothes on their backs, crowded onto every inch of the boats that took them to freedom was sobering.

In my mind, I fast-forwarded to today, where Vietnamese Americans are a part of mainstream America, and Hawai‘i. Like every ethnic group that preceded them, Vietnamese Americans have found a place in all segments of our community. But as I think back to those overcrowded boats and reflect on the courage of those early Vietnamese pioneers, I hope their successful grandchildren and great-grandchildren, now zipping around town in their fancy cars with the latest smartphones, never forget how their lives in American began. 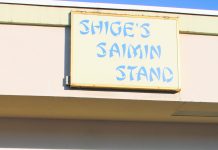