Billed as a “twisted Pidgin comedy,” Kumu Kahua Theatre’s staging of Lee Tonouchi’s “Echoes of Dat Red Guitar” lives up to its description, and then some.

You don’t have to know what the 1970s Japanese television series “Kikaida” was about to enjoy or understand the play, but it sure helps in understanding some of the nuances or references. Prior to curtain time, a video screen on-stage flashes trivia questions about Kikaida. The opening is straight out of a scene from “Kikaida,” in which DARK androids are pursuing an innocent woman and the android Jiro turns into superhero Kikaida and saves the day.

The subsequent scene is 1985, in which we are introduced to 5-year-old Guy and his parents. Guy (HTY’s Alvin Chan) has just gotten into a fight with his friend while playing Kikaida vs. Hakaida. Guy, both physically and emotionally bruised, gets sympathy from his mom (Minnie Quan), but a tongue-lashing from his dad (Wil Kahele), who tells him he’s weak and is never going to amount to anything. Who says that to a 5-year-old?

The next scene, present-day, shows a very confused and angry Guy holding his state co-workers hostage with a rifle. Just like in real life 2009, furloughs are being imposed and layoffs loom on the horizon. Guy was the last hired, so if things don’t go right, he’ll be the first one to get laid off, which doesn’t sit well with him.

A personally traumatic event and a shocking revelation by his father are the sticks of dynamite that set the full-grown snowball down the hill, triggering his “postal attitude” and compelling him to go into the office on his day off. It was all too reminiscent of Byron Uyesugi and the Xerox murders of 1999.

The play toggles between present-day and flashbacks of a few months earlier, as well as Guy’s formative years, from 5 years old to young adulthood. Director Reb Beau Allen creatively signals the flashbacks with the playing of evil Dr. Gill’s flute, the use of black light and fluorescent colors and the DARK android theme song.

In one of the earlier flashback scenes, we meet Guy’s co-workers on his first day at his new state job. He is shown the ropes by Gage (Shawn Thomsen), a personable and opinionated, yet jokester/bully of the office. Garan (Jonathan Reyn) and Gannon (Eddy Gudoy) are Gage’s sidekicks. Their “who cares” and “they can’t fire us — we belong to the union” attitudes fuel the lazy state worker stereotype. Grace (Christine Lamborn) is a born-again Christian who doesn’t realize that her sexpot attire and demeanor contradicts her hardcore beliefs. Girlie (Salem Sipes), the object of Guy’s affection, comes across as being aloof with deep-seeded anger management issues. And Gil (Shawn Forsythe), their lecherous “it’s all about me” supervisor, promotes teamwork, yet only sees the job as a stepping stone to something greater down the road.

For those of you wondering how Kikaida fits into the play, you need to have understood the complexity and the various themes of the show. After you get to know Guy’s character and realize just how much he emulates Kikaida and how he considers him his personal ‘aumakua (spiritual guide), you’ll start to draw your own comparisons.

Playwright Tonouchi, through email, explained his inspiration for writing the play. “Wuz one combination of me wanting for write one dark comedy for challenge myself as one writer and also cuz I seen one noddah play dat referenced Kikaida, but only da campier aspects. So I wanted for pay greater homage to da show by focusing more on da serious themes da show had.”

Tonouchi explained that it took several years for the play to be made. In the playbill, he wrote, “I ended up writing two plays. One of ’em won da Kumu Kahua Playwriting Contest. Dis is not dat one. Dis da loser one. Dis one nevah win nahting, brah. But you seeing ’em now.” The other play that won the contest was never produced.

Tonouchi emailed that, “Da ting lost so it just sat around in da rubbish pile until Harry Wong called me up last year and asked if Kumu could do ‘em.”

Although Kumu Kahua artistic director Harry Wong and play director Reb Beau Allen took the reins, they consulted with Tonouchi on how “dark” the play would go. Tonouchi credits Allen who really understood where Tonouchi was going with the script.

“You gotta give credit to Reb. Reb did lotta hard work on da play. Lotta people nevah know what for do with da script. But da ting really struck one chord with Reb and he put in lotta his own money for help make da production live up to da vision he had. . . .

So I knew immediately from da beginning when he explained to me his vision dat he wuz passionate about da projeck,” Tonouchi wrote in his email.

“Red Guitar” does have its funny moments. It’s a “dark comedy,” after all. Below the belt jabs are made about state workers, and one of the funnier scenes was watching Guy trying to get to know Girlie better over coffee. It was probably the first time Guy was ever alone with a woman, so it was painfully funny to watch him so socially awkward. One of the better inside jokes is personified in one of the minor characters and is best understood by diehard fans of Frank DeLima and Na Kolohe.

Like Kikaida, whose missing conscience circuit would have allowed him to make his own choices versus doing what he was programmed to do, Guy feels that something within himself is missing, and that’s why he’s not perfect. His parents think he is “mentally off,” socially inept and has no friends. Women don’t find him attractive and he is the butt of jokes among his male co-workers. If only he were perfect, his life would be better, he thinks.

You can’t help but feel sorry for Guy. All he’s looking for is recognition from his parents and peers. Growing up, Guy was never good enough for his father. His odd jobs were never as good as a “state job,” like the one his older cousin Glenn holds. So, it was no wonder that on his first day as a state worker, Guy was determined to be named “Team Player of the Month ” and get his photo on the “Wall of Cooperation.”

In the end, Guy’s final internal battle is done in the spirit of Kikaida vs. Hakaida. I can’t tell you who won, but I can guarantee that you will be sitting at the edge of your seat. And as you leave the theater, you’ll be asking yourself, as I did, “What da hell did I just see?”

“Echoes of Dat Red Guitar” continues through June 28. Showtimes are Thursday, Friday and Saturday at 8 p.m., and Sunday at 2 p.m. Tickets can be purchased by calling 536-4441, online at KumuKahua.org, or by visiting the box office at 46 Merchant St. between 11 a.m. and 3 p.m., Monday through Friday. Ticket prices range from $5 to $20. 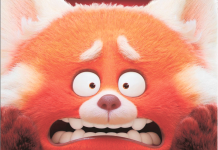 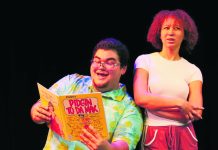 “Oriental Faddah and Son” by Lee A. Tonouchi 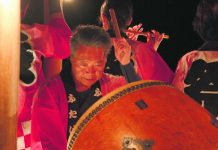