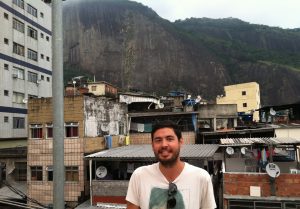 The donkeys are loose and I am petrified.
Just days ago, these animals seemed to be living symbols of tranquility — eating out of my hand, reveling in my affection, greeting me each afternoon at their feeding trough. Their serene nature was so assuring that I agreed to take care of them, here in rural Andalucía, despite the fact that I have no farm training at all. It wasn’t a problem . . . until this very moment.
Outside their pen, the donkeys appear to be different creatures entirely. They used to approach me with a gentle look in their eyes. Now, as an all-encompassing fear strikes them, they turn to run as I walk slowly towards them. I am in danger of losing the entire herd to the hills of the Spanish countryside.

The prospect of chasing donkeys wasn’t even a thought in my mind as I made my way to the tiny town of Riogordo by bus from Barcelona, with brief stops in Valencia, Murcia and Málaga.
With a population of roughly 3,000, Riogordo is the kind of sleepy destination that most people never go to, but one with which they still feel intimately familiar. The unmistakable signs of European countryside iconography are everywhere: green hills that appear to pile on top of each other, quaint cottages where dogs run untethered, and neatly arranged rows of olive and almond trees in the distance.

What is most remarkable about the landscape is how dynamic it is in reality. Each afternoon, I sit on a wooden bench and stare out at those sun-kissed hills, wondering what new detail will jump out at me. I spend one Monday memorizing the intense shade of purple radiating off of the snow-covered mountain on the horizon. I waste hours watching the cars intermittently make their way home, drinking in their graceful, winding paths and the way they disappear from sight, only to emerge again around each bend.

These simple pleasures — plus a roof over my head and three hearty meals — are all mine for the price of five hours of labor each day, performed at a bed and breakfast on the outskirts of town. While it is a rare opportunity to see the Spanish countryside from a unique vantage point, there is some added pressure that comes with the gig: In just a few weeks, the cottage doors will open for the tourist season and there is still much work to be done.

Less than 12 hours after my arrival, I begin the process of applying a fresh coat of paint over the aged corners of the main house. The task is as pragmatic as it is symbolic. When visitors step onto the property, they want to see the signature color of Andalucía’s famous whitewashed towns bursting off the walls, until all memories of their daily grind are forgotten. They want the unadulterated glow from the paint to contrast sharply with the brown and red roof tiles before blending together against a blue sky, just like the duality of the region’s expansive Moorish and Christian influences.

They also want to enjoy their stay without the sight of weeds. So, after the painting comes the slow beautification of the landscape, one excavated root at a time. For nine days I duck under barbed wire fences; labor alongside giant opuntia cactus plants; and balance, with my trusty grub hoe in hand, along the slopes of the property until the last of the weeds, which have grown unchecked for the last year, are finally tamed.

That is how I first get to know the donkeys.

I quickly lose track of how many buckets of weeds I fill each day. One thing is certain, though: Every time I bring another delivery to the large, circular pen adjacent to the parking lot, the donkeys hang their heads over the horizontal wooden beams and bray with a force that echoes throughout the property.

The routine grows so regular that when I switch jobs, I am reminded just how ravenous those animals can be. My third task takes place on the walkways alongside the donkey pen, shoveling any rock bigger than a pebble into a wheelbarrow and pushing it to a hillside drop-off point that soon resembles a makeshift quarry. As my presence has become synonymous with feeding, the braying continues; eventually, I start to pluck the stray weeds that have escaped my grasp and offer them to the donkeys in the palm of my hands.

It isn’t enough for them, especially Joyce, an alpha female with a dark brown coat, who makes a habit out of chewing the cord of my headphones as it dangles from my pocket.

“You need to get the donkeys inside their pen or they will die.”

These ominous, time-sensitive words come straight from the mouth of the bed and breakfast owner, who is out in Madrid, enjoying what he hoped would be the last relaxing days of his winter vacation with his wife and friends from his native Belgium.

My reign over the estate has gone well up until this point. The three dogs are fed each morning and evening; the nine chickens are laying eggs regularly; Dumpy the cat, appropriately named for the way he was abandoned on the doorstep, is making a habit of purring in my lap; and the donkeys have been jousting over their afternoon bale of hay with reckless abandon. Then day three arrived.

Unbeknownst to me, the bed and breakfast owner had unplugged the electric fence to complete some yard work and forgot to turn it back on. The donkeys figure this out 72 hours later and, during the calm of siesta, gain their freedom by knocking a loose post off its hinges. Their first act of independence takes place on the main lawn, where they graze unattended before scattering in different directions when I emerge from the house.

It’s one thing to spill some paint on the terrace and another issue entirely to lose a beloved animal — or six of them — over a long weekend. Images of donkeys galloping away into the mountains begin to flood my mind. To make matters worse, a goat herd, certain to startle the skittish donkeys, appears at the bottom of the hillside and is inching closer with each minute. Standing and helplessly watching is no longer an option.

Luckily, I am able to funnel the donkeys into another gated area of the property with the help of some passersby. I exhale a sigh of relief and wipe my brow, which has both cold panic sweat and beads of perspiration from the sun overhead. The donkeys are safe, secure and accounted for. They even have an entire field of green grass to entertain them for the time being.

With the excitement seemingly over, I muster the courage to phone the owner, who is still a six-hour drive away. In just five minutes, things suddenly stop appearing so optimistic. Fresh spring grass, it turns out, is high in sugar and can cause toxins to release when eaten in large quantities. That could lead to the development of laminitis, one of the most crippling equine diseases, which affects the ability to walk and occasionally requires euthanasia.

Calls are placed by the owner to the neighbors, who come over promptly and assess the situation. One of them — a British man with a powerful build — volunteers to chase the donkeys out of their temporary pen, while the rest of us assume a human barrier along all possible exit points. The animals run towards us, kicking up dirt and gravel as they pick up speed.

While they look like they might barrel through us at first, the donkeys follow the open path and make their way home. Fortunately, it doesn’t take long to secure the wooden post behind them and solve the electrical problem with the plugging in of a socket. Once the fence is repaired, a sense of calm washes over us and we break out a celebratory round of carrot sticks for the donkeys. Predictably, Joyce forces her way to the front of the pack.

When the owners return later that evening, there is more celebration and laughter over the near-catastrophe — the singular kind of jubilation that only narrowly averted disaster brings. There is good news, as well: “No more physical labor,” I am told — just placing labels on homemade Belgian ales. Thrilled at the prospect of a task indoors, I drift off to sleep effortlessly.

When it’s time for the labeling, I take a seat in the kitchen, where the unmistakable scent of freshly baked bread fills the room. A stack of custom-made rectangular labels is placed in front of me. Before I begin, I take a closer look at the design and marvel at the coincidence. The name of the beer — Diabloke — is displayed in bold, playful lettering; beneath it sits a robust brown donkey bearing a striking resemblance to Joyce, with red devil horns on its head and fire shooting from the nose, looking as if it is about to jump right off the label.

How appropriate, I think to myself before starting the task.

Joe Udell, a former Herald staff writer, is now our travel columnist. He is currently wandering through Europe.