If you have been lucky enough to spend some time with Lorraine (Massa) Tokuyama, you know how infectious her boundless enthusiasm can be . . . because you caught it. Your face just naturally breaks into a smile and you can’t help but feel happy and energized by Tokuyama’s generous and positive spirit, her vibrant personality, and her playful wit and humor.

There aren’t many 92-year-olds who can stand gracefully for hours in two-inch heels, all the while engaged in pleasant conversation as she sells crafts she painstakingly made by hand, tallying up her sales with pencil and paper and smiling naturally throughout the transaction. But that is Lorraine Tokuyama.

She has been an inspiration to many, who have been touched by her creative energy and her passion for life, learning and teaching. 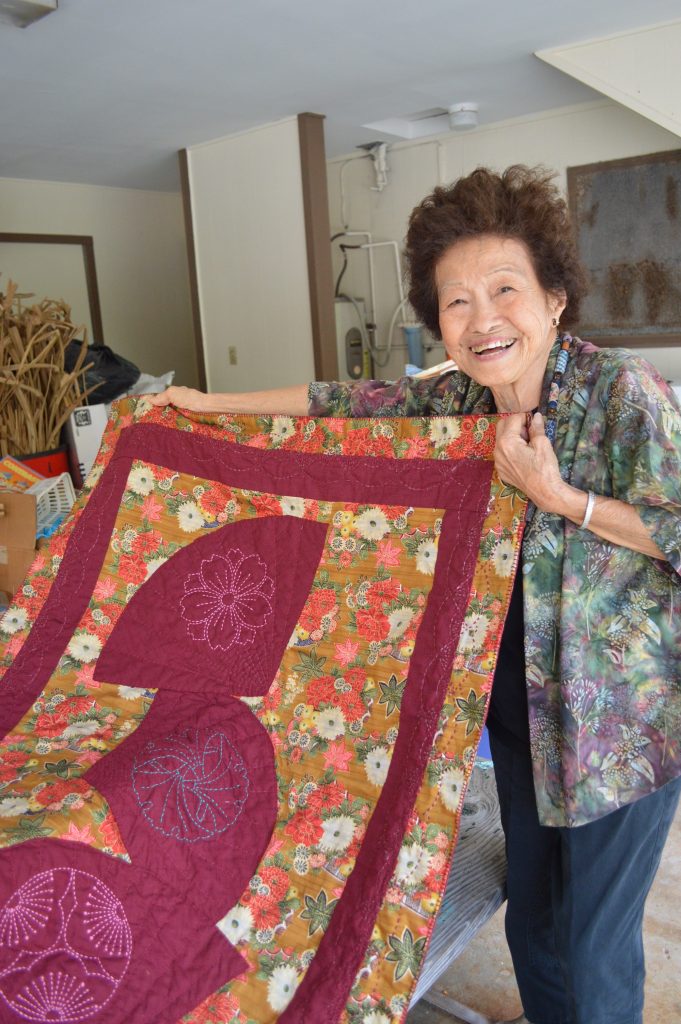 “I try to emulate the ‘Lorraine Lifestyle’: big heart, big smile, big love,” said Ann Asakura, founder of TEMARI, Center for Asian & Pacific Arts (and my mom). “She’s a teacher, but also the ultimate student and learner. She’s interested in learning for learning’s sake. To me, that’s what keeps her so vibrant: She is so open to always learning. Then, you get caught in her whirlpool of enthusiasm. For Lorraine, everything is a positive experience.”

Grant Kagimoto, owner of Cane Haul Road and TEMARI board president, describes Tokuyama as “one amazing woman.” “You would never guess her age because of her enthusiasm and her happy attitude. She is constantly working and exploring the world. Hard work and positive thoughts will get you far.”

An Early Passion for Learning and Teaching

Tokuyama attended Lunalilo Elementary and Washington Intermediate schools and graduated from McKinley High School, where, in her senior year, her American history teacher ignited her interest in art.

“She had beautiful sweaters we always admired,” said Tokuyama. “She said it was knitted — and we didn’t know what knitting was.” Her teacher offered to teach those interested students how to knit. So, every Saturday for the next month or so, she convened knitting classes with a few McKinley students.

Tokuyama worked at the art and became so proficient that she knitted a vest for her nephew and a sweater for her niece, prompting her sister-in-law to ask Tokuyama to knit something for her, as well. Tokuyama responded by telling her that together they would go and buy the yarn — and then she would teach her sister-in-law how to knit her own sweater or vest.

“[My sister-in-law] didn’t even know how to sew, so she was really happy when I taught her,” Tokuyama said.

The bombing of Pearl Harbor in December 1941 thrust America into World War II. Tokuyama, who had graduated from McKinley only six months earlier, supported the war effort by knitting socks and sweaters for the Red Cross.

She enrolled at the University of Hawai‘i, determined to become a schoolteacher and did several practice teaching stints for the Department of Public Instruction (today’s DOE). But when she was assigned to a school in Helemano, past Wahiawä, and a long ways from her family home in Honolulu, Tokuyama declined the position because she needed to care for her mother at the time.

She recalled seeing a newspaper recruitment ad for civilian workers. “I can do that,” she told herself. “I had one semester of ninth-grade typing — I was not the best typist, but I passed,” she said.
Tokuyama was hired as a Clerk Typist II, “which was the lowest rank, but it was in town.”

After working for a time, Tokuyama decided she wanted to pursue her master’s degree at Columbia University in New York. She changed her mind, however, after running into one of her former UH professors, Albert J. McKinney, who encouraged her to find work at the university. Tokuyama took his advice and found a job as a receptionist at the Mänoa campus.

Working at UH allowed her to help care for her parents. “I could walk to school and walk home and still make lunch for them.”

McKinney also suggested Tokuyama look into the field of occupational therapy and even recommended several universities where she could earn an advanced certificate in the field. Tokuyama was accepted at the Boston School of Occupational Therapy, which was affiliated with Tufts University. Tokuyama was soon on a plane bound for Boston.

Once in Boston, she received a letter from a George Tokuyama in Honolulu. She’d met him while a student at McKinley. “I didn’t really know him, but he knew me from high school,” she said. The two wrote to each other for the few years she was in Boston and then dated off-and-on after she returned to Hawai‘i before deciding to get serious and build a life together.

Lorraine and George wed in 1950. Together, they raised three children and spoiled seven grandchildren who gave them three great-grandchildren. George passed in 1999, just a few months before he and Lorraine would have celebrated their 50th wedding anniversary.

Asakura said Tokuyama made sure that her life was always well-rounded. “Besides teaching, raising her family and caring for her grandchildren and great- grandchildren, Lorraine has also managed to keep a part for herself — she has never given up her zest for learning, even while nurturing everyone else around her,” said Asakura. “We always talk about people who have fire in their belly — well, she’s volcanic.”

In her 60s, while still teaching at Jefferson Elementary School, Tokuyama was introduced to the art of sashiko at a workshop led by Kimi Ota at the original Kuni Dry Goods. Sashiko is the Japanese craft of decorative reinforcement stitching and functional embroidery. Tokuyama fell in love with the art and signed up for a TEMARI workshop on sashiko taught by Karen Watanabe Matsunaga, who had written the definitive text on sashiko. Tokuyama honed her skills in sashiko and became so proficient that Asakura approached her about teaching the craft at TEMARI so that she could share her knowledge and talent with others eager to learn the art.

“I have taken many workshops with Lorraine Tokuyama and it is always a pleasure just to be in the same room with her,” said artist and writer Paula Rath. “Her love of fabrics and sewing and crafting of all sorts is positively infectious. And she’s a fabulous — and generous — baker and cook! Always giving, always sharing.”

Indeed, to this day, Tokuyama can often be found in her kitchen, busily baking her famous breadfruit bread pudding for her church, or other delectable treats for friends and family. “I always love to try new recipes,” she says.

As a teacher, Tokuyama has a gift for “breaking down complicated tasks into teachable sections while maintaining the cultural integrity of the craft,” explained Asakura. “With her art, she seeks to capture a moment or communicate her feelings. Her stitching and color selection are very thoughtful. That’s, to me, the magic of her work — it never looks forced or overly structured.”

Last fall, Tokuyama was thrilled to learn that she had been accepted into the Hawai‘i Craftsmen fiber show. She spent hours creating a piece of traditional sashiko with “a new twist,” as she describes it. And, if acceptance into the prestigious show were not enough, she was even more surprised and delighted to learn that someone had purchased her sashiko work.

“I bought her work because of hitome-bore (love at first sight),” said artist Yukio Ozaki. “It made me so incredibly nostalgic of Japan, of my grandmother’s days. And when I took a look at the display tag, I couldn’t believe it: It was Lorraine’s work — and only $500 for that fantastic work of love! I just rushed to the show-sitter to arrange the purchase before anyone else had his/her hands on it. . . . It is [now] hanging above our TV set, and it looks soooooo good.”

In spite of her years of teaching, Tokuyama still considers herself a student, still learning from other local and visiting artists. “I always believe in learning new things,” she says.

Tokuyama continues to attend weekly knitting classes, all while cooking dinner for her family, contributing to her church, catching the bus and insisting on carrying her own bags. She’s also a member of the Hawaii Quilt Guild and the Hawaii Stitchery & Fibre Arts Guild, from whom she takes classes. She is a dedicated TEMARI member and volunteer and has participated in more than 30 of the organization’s annual Trash & Treasure fairs, which longtime members say just would not be complete without her magnetic presence.

“Lorraine talks to customers — she explains and demonstrates, and she always has something new,” said Jan Kawabata, veteran Trash & Treasure chair for TEMARI. Beyond sashiko, Tokuyama is also known as someone who is “continuously reinventing herself,” as Asakura notes. She is always featuring new crafts she creates: quilts, handbags, coin purses, table linens, water bottle bags, pot holders and more.

“She’s always put together,” added Asakura. “She makes it look deceptively simple and casual. It’s a distinctive style that really shows her love for things hand-made.”

And when it comes to hand-made, Tokuyama is the kind of aunty who will turn around and make you the most amazing bread pudding if you bake a loaf of bread for her. She’ll knit the most beautiful Christmas stockings for your children — the kind that will be around for generations to come. She’s the type of person who will drag your grandmother — her classmate — to their 50th high school reunion. And, you’ll always be grateful to her — for who she is, how much she has done and how she continues to inspire.

“I never thought I would live this long,” said Tokuyama. “Here I am at 92 and still kicking! . . . I’m thankful every day for being alive and in good health, with good friends and kind people who will remember me.”

Noelani Kimura graduated from ‘Iolani School and Northwestern University’s Medill School of Journalism in Evanston, Ill. After living in Chicago for more than a decade, she and her Chicago-born husband and their two young children recently settled into her grandmother’s home in Honolulu. Kimura services her marketing clients on the continental U.S. from Hawai‘i.