Marguerite Higgins saved me from many a bored hour in class during my elementary and high school years. I would someday become a writer — that much I knew at age 6. But who would I become? Authors appeared on the cover of their books, but they didn’t seem as real as their stories.

Then I saw the black-and-white newsreels of Marguerite Higgins sending home stories from the front lines during World War II and later during the Korean War. I had finally found myself a real-life heroine; I would become another Marguerite Higgins. In high school, the boys nicknamed me “Korean Tabi” because of my interest in the Korean War. I followed it like a war correspondent and whenever I had an audience, I got up on my soapbox to report the latest on Gen. MacArthur and the 38th Parallel. I even wept over his farewell line: “Old soldiers never die; they just fade away.” I hated President Truman for firing my war hero and most of the classmates who came to my soapbox hated him, too. I wrote poems about the war and hid them in an empty shoebox.

My notebooks in class hid this dream: I practiced my autograph for that day in the future when I would be signing books alongside Marguerite Higgins.

Ernie Pyle was covering the war in the Pacific, but there was a special flare to the signatures of Frances H. Kakugawa and Marguerite Higgins. Our names covered many pages in my notebook, with various versions of the capital “F” in “Frances.” In class, my teachers thought I was taking copious notes. In reality, I was practicing my signature for the day I would be autographing my book. I could hardly wait to get out of high school to pursue my dream.

I registered for my first journalism course in my freshman year at the University of Hawai‘i. War correspondent career, here I come. My first assignment was returned to me with red pencil marks all over it. My dreams were crushed.

The professor, after reading my first assignment, a story on American industrialist Henry J. Kaiser, who also developed Hawai‘i Kai, bellowed, “This is not journalism! There is no room for your own personal voice in journalism! It has to be straight forward reporting with facts and information! The five W’s! Remember, the five W’s!”

Marguerite Higgins and I walked out of that class and parted ways for good.

“Someday . . .” I told myself after becoming a teacher. “Someday, after I retire, I will become a writer — a best-selling novelist, or a poet, or a columnist for a newspaper.”

I went on to publish two books of poetry while teaching in Hilo, so I decided to give journalism another try. Surely a published poet would have a better chance. Both the Honolulu Advertiser and the Hilo Tribune-Herald had published stories on my books.

I was feeling a bit famous when people stopped me and asked, “Are you the poet?” The world seemed ready for me since wars were constant, thus creating endless opportunities for a journalist in war zones. But I had to start small. I knew that. I had to begin in Hilo and leave the war zones for later.

“I think the paper needs a column . . .” I began. “A column covering the human side of people — not the crimes and the negative behavior of people, but the humanities. Don’t you think we can change human behavior if we read stories about people being kind to each other? And I can do that . . .”

The editor didn’t show me the door or call me arrogant. He dignified my presence.

“Our island is too small for such a column,” he explained. “If we were a larger city, like New York or Los Angeles, something like that would work. But listen, how about being a political reporter? I’ll hire you right now. You can start on Monday, covering the election . . .”

The “five W’s” voice of my college professor came back to haunt me. I thanked the editor and walked out.

More than 40 years later, in Wayne Harada’s “Show Biz” column in the Honolulu Star-Advertiser, I am introduced as a columnist for The Hawai‘i Herald. What does this tell us about dreams and of generous and supportive people like Harada of the Star-Advertiser and Karleen Chinen of the Herald, who come into your life at the right moment to see that you don’t swing and miss for the third time.

A year ago this month, on April 18, 2014, my first “Dear Frances” advice column for caregivers appeared in The Hawai‘i Herald. Who pitched me that perfect ball for a home run?

Just a few months before the publication of that first column, Karleen, contributing writer Kevin Kawamoto, Karlton Tomomitsu (no longer with the Herald, I learned) and I met over bowls of Zip Min at the Kähala Zippy’s to discuss possible stories for a special Hawai‘i Herald edition on Alzheimer’s disease and caregiving. Karleen had published a few of my stories in earlier editions.
“How about a ‘Dear Abby’ advice column for caregivers?” shot out of my mouth. “Kevin and I can take turns doing the column.” 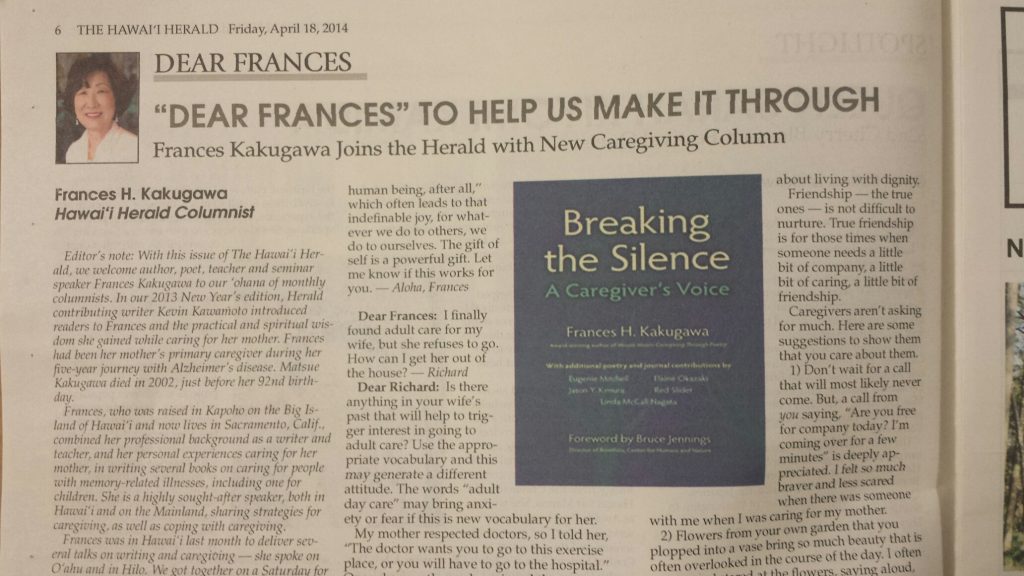 I’m wise enough to know I needed a knowledgeable partner — and Kevin was the perfect partner. After all, he has a master’s degree in social work and is genuinely interested in caregiving and other aging-related issues.

We discussed various topics and laughed over a few of the racier ones. We decided on a column by Kevin and Frances.

After thinking about it for a week, Kevin felt the column should be mine alone. Karleen decided to call it “Dear Frances.” Like “Dear Abby,” it would be a place where people involved in caregiving could ask question or share experiences from which everyone could learn. So through the professional generosity of those who sat with me that day, “Dear Frances” began.

So, dear readers, on this first anniversary of “Dear Frances,” I thank you for your interest, your emails and letters, especially those letters that spoke of the changes you have made in your life after reading stories by other caregivers and myself. Your questions and stories have created a classroom, helping present and future caregivers become a part of our community of caregivers. Thus, “Dear Frances” represents all of you as teachers.

The first bright star
Of the evening skies,
How many wishes
Do you prescribe?
Tell me, star,
What have you done
With all those wishes
I’ve sent your way?

WHY I TWINKLE, LITTLE ONE
Had I sent
Your first to you,
You would have stopped
Looking for me.
And what wonders
You would have missed,
Keeping your eyes
Away from me.

— From “The Path of Butterflies” by Frances H. Kakugawa

Frances Kakugawa was her mother’s primary caregiver during her five-year journey with Alzheimer’s disease. A native of Kapoho on Hawai‘i island, she now lives in Sacramento, Calif. Frances has melded her professional training as a writer and educator and her personal caregiving experiences to write several books on caring for people with memory-related illnesses. She is a sought-after speaker, both in Hawai‘i and on the Mainland, sharing strategies for caregiving, as well as coping with the stresses of caregiving.

Dear Frances – And the Good News Is …