Editor’s note: Earlier this month, two members of Hawai‘i’s congressional delegation — U.S. Sen. Mazie Hirono and U.S. Rep. Mark Takai — traveled to Selma, Ala., to participate in the 50th anniversary commemoration of the March 7, 1965, “Bloody Sunday” march by some 600 African Americans and their supporters for equal voting rights and to protest the killing of a young black man by a state trooper a month earlier. The 1965 marchers had planned to walk from Selma to the state capitol in Montgomery. After crossing the Edmund Pettus Bridge on the outskirts of Selma, however, they were met by armed state troopers and deputies who launched an all-out assault on them. More than 50 marchers were injured, including 25-year-old John Lewis, who had helped to organize the march.

Lewis, like Dr. Martin Luther King Jr., would become one of the icons of the civil rights movement, always advocating for nonviolent protest. In 1986, Lewis was elected to Congress from Georgia and continues to represent the state’s fifth congressional district. Now 75 years old, Congressman Lewis was among the leaders of this year’s 50th anniversary commemoration. He was among the leaders to whom Sen. Hirono and Congressman Takai presented lei from Hawai‘i.

The Herald asked Hirono and Takai to share their thoughts on the commemoration with our readers.

Fifty years is a long time between “Bloody Sunday,” March 7, 1965, and the thousands of marchers who crossed the Edmund Pettus Bridge in Selma, Alabama, on March 7, 2015, myself among them.

We were there to commemorate the 50th anniversary of Bloody Sunday. Much has changed in our country regarding voting rights, civil rights and equal treatment under the law, thanks to those who bravely stood up for what is right during the civil rights movement.

The weekend in Selma was full of history and remembrance. I first took part in the Selma pilgrimage in 2009 and, this time, was joined by Congressman Mark Takai in bringing the spirit of aloha to Selma. While it was a time to celebrate how far our nation has come in the fight for civil rights and justice, both of us were reminded of how much work remains.

A striking visual of the weekend was the large and impressive motorcade of America’s first black president and Hawai‘i’s keiki o ka ‘äina, Barack Obama, coming across the same bridge where marchers on Bloody Sunday faced police wielding clubs and tear gas.

The road to Barack Obama’s presidency came through Selma. The symbolism was not lost on many of us. Just months after the march from Selma to Montgomery, the federal Voting Rights Act was passed, paving the way for millions of African Americans to fully exercise their right to vote.

The weekend was a time for reflection and remembrance, from sharing the spirit of aloha by presenting lei to icons of the movement like Congressman John Lewis, as Hawai‘i’s Rev. Abraham Akaka did to Dr. Martin Luther King Jr. in the 1965 march from Selma to Montgomery, to witnessing a powerful speech from Peggy Wallace Kennedy, the daughter of former Alabama Governor George Wallace.

During her powerfully evocative speech on the steps of the Alabama State Capitol, Peggy Wallace spoke from the heart about her father’s record of segregation and how it was up to us to continue to work to make things right. Later, I thanked Peggy for her remarks of compassion and reconciliation.

From voting rights legislation to comprehensive immigration reform; from ensuring all of our citizens have the rights and protections under the law — regardless of who they are or who they love — to creating a system where every child has the opportunity to succeed in school; from creating a society where all people feel that our justice system serves them equally to supporting the middle class — there is much more we need to do to make good on the blood, sweat and tears of those who marched for civil rights. We are joined to continue that fight.

As an immigrant who came to Hawai‘i from Japan as a young girl, I am proud to represent the state of Hawai‘i, which has set an example of multiculturalism and racial tolerance for the rest of the country and the world. As President Obama reminded us during his speech on the Edmund Pettus Bridge, “Our march is not yet finished. But we are getting closer.”

U.S. Sen. Mazie K. Hirono has served in the U.S. Senate since January 2013. Prior to her election to the Senate, she represented Hawai‘i’s second congressional district from 2007 until 2013. Hirono was also Hawai‘i’s lieutenant governor from 1994 through 2002.

“…Important That We Educate Our Children”

It was during a couple of meetings at our hotel in Alabama that I realized how our gathering was a symbol of the significance of the 50th anniversary of “Bloody Sunday” in Selma — and of the surprising amount of work that still lies ahead.

Sitting with me was Todd Endo, a Japanese American educator who was a 24-year-old graduate student back in 1965 when he took a huge risk and stood up for equal voting rights and became one of the very few Asian Americans in the third Freedom March from Selma. The experience led him to devote the rest of his life to furthering racial equality.

Also with us was Floyd Mori, president of the Asian Pacific American Institute for Congressional Studies and former national director of the Japanese American Citizens League, who, like Todd Endo, has devoted his life to working for equality and social justice.

And here I was, now one of only 14 Asian Americans in Congress — a beneficiary of all the courageous work that these two men and so many other civil rights pioneers have done over the decades.
We talked some of the Selma of 50 years ago, but mainly, we talked about the work still ahead to ensure equality for all in America. It strengthened my resolve to work harder than ever on issues such as voting rights, immigration reform, civil rights and equal treatment for all races.
Because we are not there yet.

Senator Mazie Hirono and I were, of course, deeply proud to bring 150 lei from Hawai‘i for the “Bloody Sunday” 50th anniversary commemoration earlier this month, evoking memories of the lei from Hawai‘i that Dr. Martin Luther King Jr. and other civil rights leaders had worn in the third Freedom March in 1965. In 2015, as in 1965, they were meant to convey messages of peace, hope, love, tolerance and, of course, aloha.

The 50th anniversary commemoration, attended by an estimated 40,000-plus people, certainly had its share of emotional public moments to mark our country’s progress toward equality: the passionate rallying speech at the Edmund Pettus Bridge by President Barack Obama, America’s first black president; marching across the bridge with such civil rights giants as Georgia Congressman John Lewis, who had been brutally beaten as a young man in the original “Bloody Sunday” march; and hearing the moving words of regret and healing from Peggy Wallace Kennedy, daughter of George Wallace, who was governor of Alabama at the time of the 1965 marches. It is time, she told Congressman Lewis, now 75 years old, to recognize her father’s wrongs and instead say, “Welcome home.”

Now that the commemoration is over, it is incumbent on all of us to roll up our sleeves and continue the complicated work of making equality universal, and making it stick.
At our meeting in Alabama, Floyd Mori succinctly summed up the challenge: “The battle for equality is heightened today by the political reality that new Americans have not yet achieved their full stature as Americans in today’s democracy.” This statement is especially true in light of the recent attacks on voting rights that began after the United States Supreme Court struck down a major tenet of the Voting Rights Act.

In addition, recent violent events in Ferguson, Missouri, and elsewhere highlight the fact that a deep divide over issues of race still exists in our society.

I’m proud to have been involved in one important step taken recently to raise awareness of America’s history of discrimination — the declaration of the Honouliuli Internment Camp as a national monument. More than 4,000 people were held there during World War II, including approximately 2,300 people of Japanese ancestry who were detained as prisoners of war or internees.

In the upcoming Congress, alongside several of my colleagues, I will be pushing for greater protection of civil rights and a reaffirmation of the Voting Rights Act. In addition, I will be seeking to create a Civil Liberties Day in the United States to honor all civil rights leaders and their legacies.

Ultimately, though, we must recognize that this battle will be a long and protracted one and may never be fully realized in our lifetime. Thus, we must also prepare the next generations to continue this work.

As the father of two children — my son Matthew and my daughter Kaila — my dream, like Dr. King’s dream, is for them to live in a world “where they will not be judged by the color of their skin, but the content of their character.” While I believe Hawai‘i is far ahead of the nation in this regard, a great deal of work remains for us to attain this for our entire country.

As a parent as well as a lawmaker, the question always on my mind is how legislation and social change will affect my children, and, in turn, their children. Ensuring that all of our keiki have the freedom and liberties that were meant to be the bedrock of our nation is one of the most important things we can do as elected officials, concerned citizens and parents.

It is extremely important that we educate our children about the importance of the civil rights movement and about standing together for civil rights for all. I will be sharing with Matthew and Kaila the lessons and stories of my journey to Selma and will impress upon them that their generation needs to honor the Freedom Marchers’ legacy and carry the torch of equality into the future.

Congressman Mark Takai represents Hawai‘i’s first congressional district. He was elected to Congress in 2014 after having served 20 years in the Hawai‘i state House of Representatives. 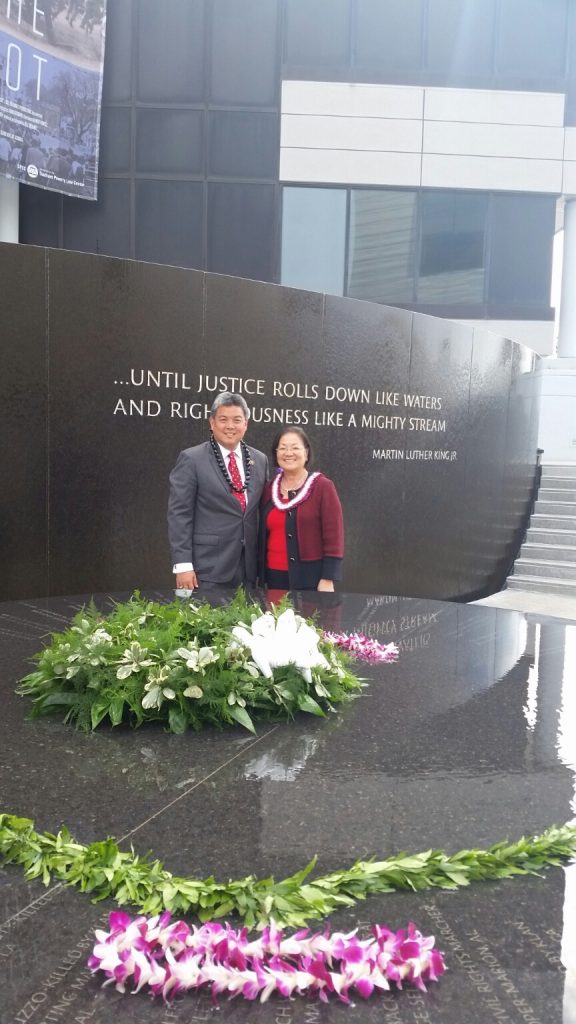