The passing of my uncle — the husband of my mom’s half-sister — prompted Auntie Yoshi’s only surviving sister in Okinawa to travel to Hawai‘i for his funeral, accompanied by two of her daughters-in-law. At age 90, Auntie Kikue is the matriarch of the Arata ‘ohana in Okinawa, which now includes only two surviving brothers, uncles Tamotsu and Nobu. Two other sisters and one brother have already passed on.

I don’t know if I will ever see Auntie Kikue again. Although she is still healthy, alert and mobile, I have a feeling this was her last trip to Hawai‘i. She mentioned many times that the flight was so long — eight hours from Fukuoka to Hawai‘i, plus another two hours from Naha to Fukuoka. “Töi, töi (so far) . . .” she said. Of course, I can, and want to, go there, but I’ll have to get my arthritic knees replaced before I can do that.

So, time with Auntie was very precious. My siblings and I tried to spend as much time as we could with them, going over to Auntie Yoshi’s house after work and on the weekend before they returned to Okinawa. Part of our motivation was to learn more about our family history.

Although my mom shared a lot before she passed 30 years ago this October, there’s so much more I want to know. I know that once Auntie Kikue passes, so will go many of our family’s stories.
On the eve of their flight back to Okinawa, we were gathered around Aunty Yoshi’s dining room table. I don’t know how we got on to the subject of World War II and the Battle of Okinawa, but somehow we did. On one of my previous trips to Okinawa, I had asked Auntie Kikue how the family had fared during the Battle of Okinawa, which began April 1, 1945, with American forces coming ashore. She said everyone was OK, no injuries. But my question back then wasn’t specific enough. Yes, no one died or was injured, and the family home was not damaged.

But I hadn’t asked her whether they’d had to leave their home, which I learned they did. They left their home near the ocean in Awase and moved inland to neighboring Yogi, where they took refuge in a gama — those deep mountainside caves where Okinawans hid from American soldiers — with about a hundred other people. Auntie remembered that whenever they had to relieve themselves, they went deep into the cave. Sometime between April and June — the Battle of Okinawa lasted only three months, but left more than 100,000 civilians dead — she said a Nisei approached their gama. “Detekoi, detekoi (Come out!),” he implored. Slowly, the frightened Okinawans emerged from the cave.

A Nisei? That meant he was a Japanese American soldier — most likely a Military Intelligence Service soldier, possibly from Hawai‘i. “Ano Nisei no namae oboete?” I asked, trying to speak as much Japanese as I could, which isn’t much. Do you know that Nisei’s name?

“Higa-san,” she replied. “Higa nani?” Higa . . . what’s his given name? I asked, wondering if it might have been Takejiro Higa, or his older brother Warren, who, as MIS soldiers, were with the invasion forces. “Wakaran,” Auntie said. She didn’t know, but she did remember that he had taken out a picture of his wife and kissed it. Might it have been Thomas Taro Higa? That’s my next research project.

But back to the story, Auntie said the soldier gave each of the Okinawan civilians some crackers to eat. Hidden away in the cave, they’d had almost nothing to eat and were starving. But, the soldier was an American. The Japanese soldiers had told them that the American soldiers would give them food to eat food, but beware, it was laced with poison and they would die. Although starving, Auntie and the others would not eat the crackers. Seeing that, the Nisei put the cracker in his mouth and began chewing on it to show them that there was no poison in it. Only then did the civilians bite into the crackers.

She also told me about some of the old people, some no longer able to walk, or too weak to walk. Many had taken refuge in the hillside burial tombs. The tombs were big and could hide several people. Auntie said many of those people had resigned themselves to dying in those tombs. When they would not surrender, the Nisei and other American soldiers climbed up the hillside to bring them down. Auntie recalled that their bodies were dirty and smelly, their hair infested with bugs. Still, the Americans gently lifted them with their two arms and carried them down the hillside. Auntie was so amazed. She never forgot that day, or the kindness of that Nisei or the other Americans.

I never knew that I had an MIS story. Just two weeks earlier, I had attended the MIS Veterans Club shinnenkai, never imagining that men like these aging veterans had been responsible for my family having survived that horrific battle. It doesn’t matter that that specific “Higa-san” was not in the room. I know that had any of them been in that same place in Yogi on that same day, they would have done the very same thing.

Okagesamade . . . because of the compassion of the MIS and other American soldiers who served in the Battle of Okinawa, my family was spared. That’s something for which I will always be grateful. 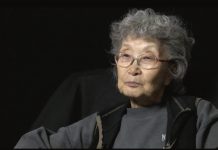 Rainbow Connections – THE GIFT OF GAMAN