Over 900 people packed the Hawaii Okinawa Center on Jan. 17 for the installation of the organization’s 2015 officers and advisors and to recognize the year’s Uchinanchu of the Year.

In his message, outgoing president Chris Shimabukuro thanked the Uchinanchu of the Year for their service to their individual clubs, the Hawaii United Okinawa Association and the community.
He also acknowledged the presence of Gov. David Ige, Hawai‘i’s first governor of Okinawan ancestry, and his wife Dawn and their son Matthew. “It means so much to have you here. Thank you,” Shimabukuro told Ige, adding that Ige’s election as governor also made Uchinanchu in Okinawa very proud.

Shimabukuro said 2014 was “a wonderful year that created so many heartfelt memories.” He said he learned that “the strength of the HUOA is its people” and conceded that what he will miss are the many opportunities to meet people in the Okinawan community. He said he was treated with great respect wherever he went, but acknowledged that the respect was because of his role as president of HUOA, which made him realize the respect HUOA has garnered over the years.

But Shimabukuro also posed a challenge to the audience about engaging more young people in the organization. “Do we offer enough to attract future generations?” he asked.

Shimabukuro also updated the audience on the plans for the Hawaii Okinawa Plaza, a $6.5 million commercial complex that the HUOA plans to develop across the street from the Hawaii Okinawa Center to serve as a future revenue stream for HUOA. He said construction is slated to begin later this year. Shimabukuro said $800,000 has already been raised. Another $3 million is yet to be raised — $2 million in Hawai‘i and $1 million in Okinawa. The balance will be financed.

In his first official appearance at an HUOA function as Hawai‘i’s governor, David Ige said it was an “honor and a privilege to be here.” He also thanked those who volunteered their time, labor and/or talents for his inauguration celebration in December. Ige said the HUOA and its member clubs serve as “role models” in our community. He thanked Chris Shimabukuro for leading the organization in 2014 and said he is looking for forward to working with incoming president Mark Higa. The governor concluded his remarks by congratulating the 45 Uchinanchu of the Year for their service to HUOA and the community.

Circuit Judge Karen Nakasone installed the 2015 officers and advisors. As a college student, Nakasone studied at the University of the Ryukyus for a year. She is a member of Yagaji Doshi Kai. Nakasone thanked the officers “for representing our organization so well.”

In his incoming president’s message, Higa noted that he had selected the word, “Sumiti,” as the theme for his year. Sumiti is the Okinawan equivalent of the Japanese word, someru, or somete, meaning “to dye” or, more loosely translated, “to imprint.” Higa explained that we are all imprinted with the influences of many people — family members, friends, co-workers, even the participation of HUOA’s 49 member-clubs.

In the event’s program booklet, Higa referred to the lyrics in the popular Okinawan song, “Tinsagu Nu Hana,” which say: “Just as our fingernails are dyed with pigment from balsam flowers, our hearts are imprinted with the teachings of our parents.” He reflected: “’Sumiti’ is a focus on the imprints that our Hawai‘i-Okinawa community makes collectively over generations. As we continue to honor and reflect on the imprints left by our ancestors, we look forward considering the things we do each day throughout the year and ask ourselves, ‘How can we similarly leave a positive indelible imprint for our children and future generations to come?’”

Higa, a principal with WCIT Architecture, was born in Okinawa to the late Yeiji and Tsuruyo Higa. His family roots are in Nago in northern Okinawa on his father’s side of the family, and in Shuri, Okinawa’s ancient capital, on his mother’s side.

During the program, recognition was also paid to Lynne Yoshiko Nakasone-Sensei, who was awarded The Order of the Rising Sun, Gold and Silver Rays imperial award in Japan last year. The two latest “Uchinaa Goodwill Ambassadors” were also introduced — Maurice Yamasato and Conrad Hokama of Hilo.

The “Karii!” (Okinawan congratulatory toasts) were offered by Charlie Higa, Nago Club member and co-founder of the Zippy’s restaurants; and president Mark Higa’s father-in-law, Takashi Gushiken. Takashi and Masako Gushiken are the parents of Higa’s wife, Hanae. They traveled from Okinawa to celebrate their son-in-law’s installation as HUOA’s 63rd president. 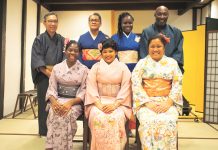