Kapu: spiny lobsters. One of the interesting things about fishing here are the various restrictions. For instance, it is illegal to use scuba gear to capture seafood. It’s not clear whether you can dive using a Hawaiian sling, although they do sell Hawaiian slings here, which are called mari. I am told that it is illegal to fish for spiny lobster. However, one local told me that if you use only your hands to grab the lobster, then it’s legal. Go figure . . . 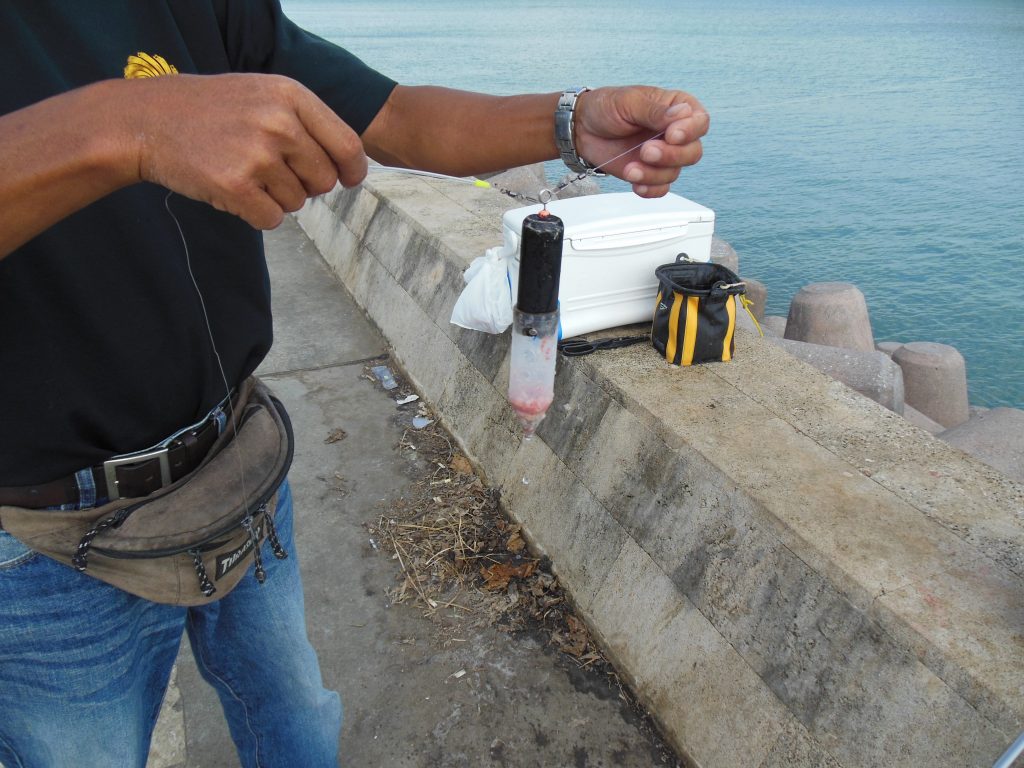 What, you like beef?! Not the kind you eat, but rather what one local guy will tell another before they begin throwing. I’ll try my best to describe an incident that happened recently. I hope it doesn’t alarm you because incidences like this are rare.

I was walking home from a festival, carrying my yakisoba and okonomiyaki over a bridge along Route 58, when I saw a man and woman who looked to be in their 30s, arguing. He was trying to hold her while she seemed to be trying to break away. I thought they were boyfriend and girlfriend by the way he was trying to hold her, but she was trying to wiggle free. They both appeared to have some kind of physical and/or mental disability. As I got approached them, I looked to see if he had a weapon. That’s when our eyes connected and the woman was able to break his grip. He did not have a weapon, so I continued walking and simply chalked it up to a boyfriend and girlfriend arguing.

I stopped for a traffic light and the woman ran by me and turned the corner. She was waiting, crouched down, about 30 feet away. That’s when the man came up to me and started yelling at me in Japanese. I had no idea what he was saying, except maybe something like, “What were you looking at?” He continued his rant, so I told him, “Relax! Do you speak English? Relax!” He wouldn’t relax, and after a few more rants walked to the woman and stood next to her as she continued to turn away from him. He continued to yell at me from around the corner and I had a stare-down with him. He eventually looked away and I crossed the street. Of course, I remained alert to the possibility of him attacking from behind while I was crossing the street. He didn’t, and I continued on my way home and enjoyed my yakisoba and okonomiyaki, despite his best efforts to ruin my dinner.

What you see is not what you get. I have seen many things in my life that are not quite what they appear to be: I was lucky to see Siegfried and Roy, and David Copperfield, in Las Vegas — not once, but twice, each. With illusionists, you know there is trickery going on.

Here in Okinawa, I discovered an illusion that has no rational explanation. Even the engineers I teach are stumped.

Here’s what it is . . . When you walk along Naminoue Seaside Road in Akebono, Naha, you cross over the Tomari Bridge, which is about a mile long and, at its highest point, is about 40 yards high above the harbor. As you approach the bridge from north to south, you can see the Okinawa Prefectural Government office building at the western entrance to Kokusai Dori. The building is distinct because its roof, although largely flat, has a shallow “U” shape in its center. This is the illusion. It is noticeable from the road, as it protrudes above the bridge and looks like it is right behind the bridge. In reality, it is about 2 miles away from the bridge, in central Naha, and is separated by Route 58, with many buildings and hotels along the way. When you get to a section of the bridge where you can see the rooftop of the building you can see that the building is far off in the distance. It’s unbelievable! The view from the bridge correctly positions the government building at the top of the horizon of Naha. Look at the picture in this column and see if you can identify the building.

Okinawan word of the week: imi, or mayui, which means “illusion.”