How do we keep Hawai‘i’s World War II story alive so that its lessons continue to resonate for generations to come? It’s a tough question that anyone involved in passing on history likely struggles with, be they educators, museum directors, war veterans and their descendants or parents.

One of the most hopeful efforts is the newly released film, “Under the Blood Red Sun,” which is based on the novel of the same name by children’s book author Graham “Sandy” Salisbury. In the early 1990s, the Hawai‘i-born Salisbury had set out to write a book about the bombing of Pearl Harbor for young readers. He began by asking himself a simple question: “What must it have been like to have been a young person in Honolulu on the day Pearl Harbor was bombed?”

“Under the Blood Red Sun” went on to sell 3 million copies. Children and adults alike from all across America were drawn into his story of two young boys whose friendship and moral character are tested during one of the bleakest periods in Hawai‘i’s history.

The period was of special interest to Salisbury because his father, as a single man, was at Pearl Harbor on the morning the bombs fell. He had just gotten off his ship, the USS West Virginia, and was walking away from it when Japanese planes began their assault. His father spent that day helping to put out fires and caring for the injured. Salisbury’s parents later married. By then, his father had become a Navy pilot. Two months before Salisbury’s first birthday, his plane was shot down in the Pacific theater, killing his father instantly.

A gifted storyteller, Salisbury blends real-life experiences with library research and first-person interviews. From those writing experiences, he learned to identify what he refers to as “the Pigeon Moment” — a pivotal point in his story.

In “Under the Blood Red Sun,” Salisbury happened upon that “pigeon moment,” which he describes as a “serendipitous,” while visiting his uncle, who was then publisher of the Honolulu Advertiser. His uncle’s secretary overheard the two men talking about the book Salisbury was writing and offered to introduce him to her husband, who had witnessed the bombing of Pearl Harbor from his home in Kalihi as an 11-year-old boy. Her husband also told Salisbury about the FBI agent ordering him to kill his father’s hobby pigeons. That story found a place in Salisbury’s book — and became one of the dramatic highlights in the movie.

“My mission in storytelling really is to show kids how to navigate life and make decisions that are going to lead them to a better life,” explained Salisbury in the DVD’s supplemental commentary. “Education,” he said, “is the only way we’re going to get beyond the ignorance of our past.”

Salisbury’s gift for telling stories is what attracted filmmakers Dana Satler Hankins and Tim Savage to “Under the Blood Red Sun,” the book, and then got them envisioning a full-length feature movie.

The story opens in Honolulu in the days leading up to Japan’s bombing of Pearl Harbor. With Japan’s increasing aggression in the Pacific, life in Hawai‘i is already showing signs of racial tension.

“Under the Blood Red Sun” features a multigenerational mix of characters of various ethnicities, but is told primarily through the eyes of two boys just entering their teen years — Tomikazu “Tomi” Nakaji, a Hawai‘i-born Japanese American, and his best friend, a haole boy named Billy Davis. Overnight, their happy, carefree lives playing baseball and climbing trees and hanging out in the woods near their homes is turned upside down with the bombing of Pearl Harbor. Life for Tomi becomes especially challenging. But his friendship with Billy remains steady as a rock.

The bombing throws the Nakaji family’s world into a tailspin because of their Japanese ethnicity. Tomi’s father is arrested by the FBI and taken directly from his fishing boat to an internment at Sand Island, where he is held with other Japanese men. His fishing partner is killed. Tomi’s grandfather, a proud and nationalistic Issei, is caught between two conflicting countries and cultures. With his father interned, Tomi is forced to become the head of the Nakaji household: He must speak with government officials and even read English materials for his immigrant mother. Tomi confronts the fear, harassment, hatred, bullying and discrimination of the times as a young boy and yet with the innocent courage of a grown man.

Although Tomi and Billy live within walking distance of each other, they come from different social classes. Billy’s father is an executive with Matson, which operates luxury liners. Tomi’s immigrant father fishes for a living and raises chickens for their eggs and their meat; his mother is a housekeeper for the family on whose property the Nakajis live in a simple wooden structure.

Producer Dana Hankins said she was drawn to the story because of Tomi’s character and what he faces in terms of prejudice and discrimination. She said she was impressed by the kinds of character values he displays. “We all hope that we will embody those same characters values under those circumstances.”

Ten years after she first read it, Hankins gave a copy of the book to her longtime friend, local film director Tim Savage, who felt an immediate connection to the story. Both he and Hankins felt it was story that needed to be told on the big screen.

Hankins tracked down Salisbury and pitched the idea. The two then began talking about what Salisbury needed to do to transform the book into a screenplay, something he had never done before. She also introduced him to Tim Savage and the project began to pick up steam.

Filming took place over 17 days in November 2013. It was a tight production schedule necessitated by an equally tight production budget. Hankins declined to release the film’s budget, but said funding came from a number of sources, including an investor; donations, both monetary and in-kind, from the community; a production loan; reduced rates for supplies and services and even a kickstarter crowdsourcing campaign. The film still has some outstanding bills to pay, added Hankins.

Filming took place at several locations on O‘ahu — Hawaii’s Plantation Village in Waipahu, in homes in Nu‘uanu and along Old Pali Road, at Roosevelt High School, in downtown Honolulu and at Kalaeloa for the Sand Island internment camp scenes. Finding locations and capturing shots that depicted Hawai‘i in the 1940s was a challenge, but one the filmmakers overcame. The beauty of 1940s Hawai‘i comes through in the cinematography and original music scores and the direction of Tim Savage.

But the real stars of the film are the cast members and the characters they so convincingly portray. Most of the young actors were making their film debut in “Under the Blood Red Sun,” but each held their own, beginning with Kyler Ki Sakamoto, who plays Tomi, and Kalama Epstein as Billy. Bryce Moore is excellent as Keet Wilson, who picks up on the anti-Japanese sentiments of his father and begins bullying Tomi, who was once his friend.

Mina Kohara, who was just 8 years old when the film was shot, is a natural as Tomi’s little sister Kimi. The main adult actors — Dann Seki as hard-headed Grampa; Autumn Ogawa as Mama Nakaji, Tomi’s mother; Chris Tashima as Papa Nakaji and Wil Kahele as Charlie, the yardkeeper — turn in outstanding performances, with an equally strong supporting cast.
Each actor brought strength to his or her role. Put them all together and you have the great film that is “Under the Blood Red Sun.”

In the supplemental commentary on the DVD, Savage said that finding just the right young boy to play Tomi was a six-year quest. It was an extremely important role because Tomi appears in every one of the film’s 140 scenes, he said. When Kyler Sakamoto auditioned for the role, they knew immediately that they had found their Tomi.

Salisbury was just as impressed by Kyler’s acting abilities, describing him as just a “basic, unassuming kid,” off-camera. “But you put him behind a camera and, boom, he’s on,” Salisbury said. “And, that young man can make faces that can pull off that kind of emotion that I’m talking about,” he added.

Kalama Epstein, who plays Billy, knew the “Under the Blood Red Sun” story even before he was cast for the film. Kalama had read the book in the third grade and again as a class assignment in the sixth grade. His character is from a civic-minded type of family, so he understands respect and fairness and sees a person’s true character rather than their position in society — which is why Billy and Tomi, despite their vastly different backgrounds, are rock-solid friends.

Kyler and Kalama were both 13 years old when the majority of the film was shot. One scene that had to be shot six months later, in the spring of 2014, was Tomi’s swim to the Sand Island internment camp to see with his own eyes that his father was alive. That scene concerned Savage and Hankins because most boys between the ages of 13 and 15 change and mature dramatically, even within the short span of six months, Savage noted.

The real strength of “Under the Blood Red Sun” is its ability to teach by example and through the demonstration of cultural strength and sensitivity, rather than by lecturing.
In the end, Savage said he hopes the film will show viewers “how to live their lives when they’re faced with adversity.”

Dan “Grampa” Seki echoed those thoughts. He said an examination of history from then (the World War II years) to now and into the future is “still relevant as seen in current events.”
“Hopefully, we are learning something from the mistakes we made in the past and will apply it to what’s going on now and not make the same mistakes again, moving into the future.”

“Under the Blood Red Sun” is available for purchase in DVD and Blu-Ray from the Japanese Cultural Center of Hawai‘i gift shop and at Fisher Hawaii. It can also be viewed online at www.underthebloodredsun.com. 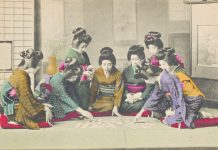