We’ve all heard the saying, “Give credit where credit is due.” Here is a story of a family that deserves their country’s appreciation.

Saichi and Matsue Inouye were both born in Onomea, a small plantation town along the Hämäkua coast. They attended Pepe‘ekeo School. They met and got married and lived in the even smaller town of Kawainui, near Pepe‘ekeo School. Saichi worked for the County of Hawai‘i motor pool in the 1930s. Matsue was a homemaker, busy tending to the household and raising their seven children — six sons and one daughter.

When World War II broke out, tension spread within the community, especially for the Japanese immigrants and their families. One by one, ministers, school principals, newspaper editor and others were arrested and sent to relocation centers on the Mainland and in Hawai‘i. Many Nisei were drafted or volunteered to serve in the armed forces. The Inouye family was among them. One son, then another, entered service for our country. Even after the war, more Inouyes were involved in serving Uncle Sam.

George, now deceased, was the eldest son. He was married to the late Mitsue (Yanabe) and served in the famous 100th Infantry Battalion, fighting in Italy. He was wounded in battle and returned home, where he managed Veteran’s Produce in Hilo. George was Sen. Daniel Inouye’s first campaign manager in Hilo. His son Kerry served in the U.S. Air Force and then returned to the Big Island. Kerry became a firefighter and was assigned to the Hilo Airport Fire Station. He retired as chief.

Their second son, Alex, was married to the late Asayo (Muranaka). He was stationed at Schofield Barracks during the war. After being discharged, he worked on the highway bridge maintenance crew for the state Department of Transportation. Alex’s son, David, served with the U.S. Army in Japan. David’s son (Alex’s grandson) Todd attended the U.S. Air Force Academy and served as an Army major in Qatar. At the completion of that deployment, he was expected to return to the Pentagon in Washington, D.C.

Saichi and Matsue Inouye’s third son, Charles, served as an interpreter in Japan for two years. Both Charles and his wife Misao (Oshiro) have passed on. Their son Wayne volunteered for the Army and served during the Vietnam War. He was stationed in Okinawa and also spent time in Maryland before being discharged. Wayne now lives in Reno, Nev.
Their fourth son, Hiroshi, who is deceased, was married to Evelyn (Arai) and served in Guam. After being discharged, he worked for the County of Hawai‘i as a painter. Their son Craig served in the U.S. Air Force and then joined the Hawaii National Guard. Craig retired as a captain from the Airport Fire Station and currently lives in Hilo. Hiroshi’s and Evelyn’s grandson, Daren Tanaka, (daughter Doreen’s son) joined the Hawaii Air National Guard and served in Kuwait.

Fifth son Harry, who is married to Takeko (Kaneshiro), served as an interpreter in Japan. After being discharged, he made his living as a florist. He is now retired and lives in San Francisco.

Their sixth son, Walter, who is married to Ellen (Hamane), served his country in the Panama Canal Zone and later worked for the Carnation Cream Company. They are now retired and live in Honolulu.

The Inouyes’ only daughter Patsy was married to the late Tsuneo Adachi, who served at Schofield Barracks. Their grandson Burke, the son of Aaron and Ramona (Adachi) Nagata of Kona, served eight months in Afghanistan in 2012. He was discharged from the Army in March 2014.

Saichi and Matsue can be proud that all seven of their children and their families served their country. 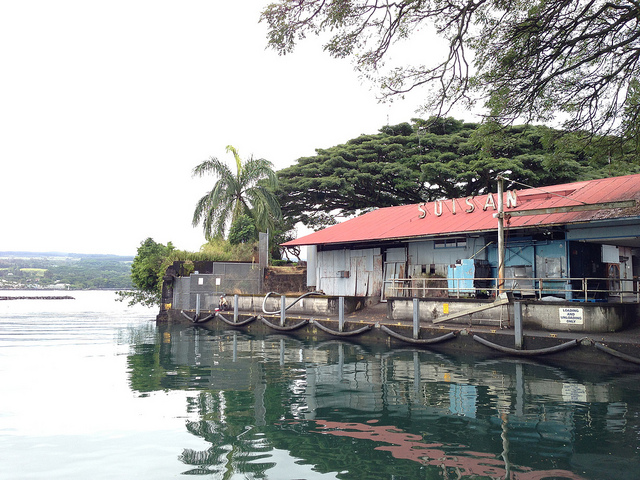