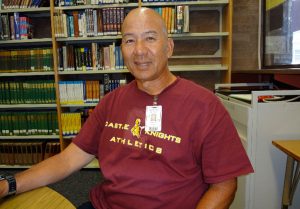 With school now back in session, Nelson Isao Maeda is back on the football field at Castle High School, beginning his 18th season as the Knights’ head coach.

At age 56, he remains passionate about the game and about working with young student athletes. Although he hasn’t consistently produced championship teams, Castle has made it to the OIA Red Conference playoffs for 15 years, and the football Knights are always exciting to watch, playing to overflow home crowds on a regular basis.

The crowds have gotten bigger since the school installed artificial turf two years ago. It’s proven a big help. With Käne‘ohe’s frequent downpours, players are no longer sloshing and sliding around on a muddy playing field, and his staff doesn’t have to break their backs lining the field before every home game.

Also new to the Käne‘ohe campus are Coach Maeda’s two wahine bosses. For the first time in school history, Castle has a female athletic director, Laynie Sueyasu, and a female principal, Sheena Alaiasa. It’s probably the only school in the state, maybe even in the country with two women in the lead positions.

Coach Maeda was born on the town side of the Wilson Tunnel and moved to Kailua in his teens. He played wide receiver and defensive back for Kailua High School under Coach Joe Kahahawai. At 5’11” and 160 pounds, he definitely wasn’t the biggest man on campus. But he was fast. He also lettered in basketball and track, so he was always on the go.

Back in those days, only a handful of AJAs were big and tough enough to try out for Division I football. What Maeda lacked in size, he made up in guts and drive. He decided to walk on to the University of Hawai‘i Rainbows squad during Coach Larry Price’s last spring practice and, subsequently, played under Coach Dick Tomey for three years. He was a defensive back at UH and worked his way to become the starting safety alongside legendary football backs Blane Gaison and Dana McClemore.

Maeda’s first job after graduating from UH in 1980 was as a student-teacher at Kailua High School, where, out of the blue, at age 22, he was offered the head-coaching job of the Surfriders. Young and naïve, he took the job, not realizing what he was in for. But Maeda survived and his passion for coaching was lit.

During the 1983 and ’84 seasons, he volunteered on the Rainbows squad as a graduate assistant while working on his master’s degree. In 1983, Coach Tomey was in his final year as head coach at UH, and Bob Wagner coached his first year at Mänoa in 1984. Maeda said he learned a lot from both coaches.

In 1985, he was offered a position at Castle High School and has been there ever since. In his early years, he worked with problem students as a counselor — Maeda prefers calling them by a gentler Hawaiian word, “kolohe kids” — and helping out on the football field.

In 1996, he took over as head coach and is currently in his 18th year. Only ‘Aiea High Coach Wendall Say has been with his team longer — 23 years.

The years 2000 to 2002 were especially hard on the Maeda family. Coach’s wife Jodi, the mother of their three young children, was diagnosed with a malignant brain tumor. Maeda seriously considered giving up coaching to devote more time to his family. But Jodi, knowing how much he loved football, encouraged him to stay on.

Jodi died in February of 2002, leaving behind her husband, 9-year-old Hailey, 8-year-old Micah and 3-year-old Noah. With the help and support of Coach Nelson’s parents, especially Grandma Maeda, the coach and his children have adjusted to life without Mom.

And then that fall, it happened: Coach Nelson Maeda’s Castle Knights won the OIA football championship for the first time — the first league championship for Castle in more than half a century. Many believe it was Jodi’s karma. The only other time that Castle had won the title was way back in 1945, when the school was called Benjamin Parker School.
There probably aren’t many people around who remember that 1945 team, coached by Mits Fujishige. Wayne Sakamoto was the quarterback, Hugh Johnson was the star running back, and Bulldog Guro and Mick Nakamura were a couple of 120- to130-pound athletes who went up against way bigger opponents.

This year’s Castle team will be modest in numbers and size. Coach Maeda just doesn’t have the 275- to 300-pound behemoths of Kahuku, up the Windward O‘ahu coast, or Farrington. But what Maeda’s players lack in size, they make up in agility, quickness and conditioning. No one has better conditioned athletes than Nelson Maeda’s Castle Knights. They have to be, because, as usual, six or more of his boys will be expected to play both offense and defense.

On offense, Castle has been primarily a passing team. This year’s squad should be exciting and entertaining to watch. They’ll be playing a faster, quicker Oregon-style up-tempo beat and an inside zone, read-option game.

Coach Maeda has a dozen or so assistants, many of them Castle alumni, who help him run both the varsity and junior varsity teams. One of them, Henry Paaga, has been with the program for more than 12 years and handles the defense. Palani Nunes is the offensive coordinator. Nunes graduated from St. Louis High School, but is totally committed to Castle. He has been with Maeda for six years.

Football is like the game of chess. Size, strength and speed have always been a big part of the game, but it also often involves thoughtful strategy, traps and trick plays, and this is where Coach Maeda excels.

His other job as a counselor for “kolohe kids” is equally challenging. Maeda said he steers some of the boys into football so that they can work out their aggression in a more constructive environment and he can continue to instill in them life’s lessons. Clearly, Nelson Maeda’s guidance both on and off the football field has had a positive impact on many a wayward lad in the Käne‘ohe community.

Dr. Michael Okihiro is a retired Honolulu neurologist and a self-professed “baseball nut.” He may be a “baseball nut,” but also enjoys watching football.