Preparing for an approaching hurricane is a very different experience when you live in a town with three small markets that rely on a once-a-week Young Brothers barge to bring all of the goods to the island. So, when Hurricanes (later Tropical Storms) Iselle and Julio threatened the state several weeks ago, I got a firsthand look at how Lanaians batten down the hatches for what forecasters predicted would be a pretty severe hit to the island.

Iselle was forecast to reach Läna‘i late Thursday night and last into early Friday morning. When I went to the market on Tuesday afternoon, things were their usual calm; nobody seemed to be stocking up on storm supplies. That night, I watched the news and saw the reports of Honolulu residents completely wiping out the inventory of bottled water and toilet paper at Walmart and other stores. I guess Honolulu folks like to get a jump-start, considering Iselle wasn’t supposed to reach O‘ahu until four or five days later.

But, boy, what a difference a day makes. The next morning when I drove pass what I call “the strip,” where the markets are located, all of the parking stalls were filled and the stores were pumping. People were buying cases of water, Vienna Sausage, Spam, toilet paper, canned goods and saimin — you know, all the “essentials,” by Hawai‘i standards. They were also buying charcoal, butane, batteries and propane to cook in the event of a power outage. I ran into a friend that afternoon and asked, “Hey, did you stock up just in case the storm hits?” “I have water at home, bullets for my gun and bait for my fishing pole. I won’t starve,” he replied.

Gotta love the resourceful, outdoorsy spirit of Läna‘i people. You would never hear a Honolulu guy say he would go out and shoot his own meat in the event of an emergency.

Of course, my family members on O‘ahu were calling all week to check if Alex and I were hurricane-ready. And, as expected, my mom was a little annoyed when I didn’t seem to be taking it too seriously. Even the threat of a hurricane wasn’t enough to convince me to buy bottled water or AAA batteries for my flashlight, because they’re just so expensive on Läna‘i. Instead, I made sure we had candles, at least one working flashlight (although it was so old and dim that the moonlight probably would have been brighter), and I went home and filled up my thermos, recycled empty water bottles, pitchers and containers with regular tap water, just in case. The day before, I had talked with the director of the Läna‘i Water Company — he said that Läna‘i City would not have a problem getting water, even if the electricity went out — unless a pipe burst or was damaged — so I wasn’t panicking.

On Wednesday afternoon, I received an all-employee email from our human resources department, notifying staff that our offices would close a half day on Thursday to allow employees to get home early so we would be off the roads by pau hana time, when Läna‘i was expected to begin feeling the effects of the storm. The email also said that our offices would be shut down all day Friday in anticipation of heavy wind and rain and possibly dangerous road conditions. That’s when I started to worry a little bit.

Since I work for Pülama Läna‘i, which owns and operates the island of Läna‘i, many departments within the company were on the front lines for the storm prep. Our civil operations and fleet crews, for example, made sure all of the company vehicles were gassed up in case the fleet needed to be deployed to assist with an emergency. They were also ready to help clear roads and assist with debris removal after the storm. Our senior management team was in constant contact with State Civil Defense and the Maui County Police Department, receiving storm updates and helping to develop action plans to ensure the community was as prepared as possible for Iselle and Julio. Our community development team helped provide supplies and support for the shelter on the island.

It wasn’t until Thursday, just before our offices closed for the long, stormy weekend, that I really started to freak out when our facilities crew began boarding up our windows and we were instructed to cover all of the computer equipment on our desks with garbage bags in case the roof leaked and rain got inside. Before then, I couldn’t understand why people were panicking and filling up their gas tanks. I mean, where the heck am I going to drive to, I thought. Läna‘i City is a 2.5-mile loop; I can go anywhere on empty and still have enough gas to spare.

It finally dawned on me that people weren’t filling up their gas tanks in case they needed to drive somewhere during or even after the storm — it was in case the barge was not able to sail to Läna‘i and gas ran out on the island. Duh. Longtime residents said they’ve gone weeks without any goods coming in from Honolulu — and that’s when you will wish you had waited in line to fill up at the one gas station on the island.

Thankfully, Thursday night came and went with no real sign of Iselle. Friday morning started off a little bit overcast, but the afternoon turned out to be better than normal weather for Läna‘i City, at least in my neighborhood. Saturday and Sunday were gorgeous and might have been two of the hottest, muggiest days I’ve experienced since moving to Läna‘i. And, since forecasters were predicting that Julio would hit on Monday, we were all still playing it safe, even after Iselle had spared us.

The toughest part about the storm-watch weekend was being cooped up in the house for three and a half days, especially since it was so hot. I broke a sweat just lying in bed and I literally got stuck to the couch because I was so hot and sticky. My clothes clung to my body and my curly hair looked like a lion’s mane, except flat in the back where my head left an indentation in my pillow.

For the most part, the streets were empty and most people just loafed around at home, although several friends told me they couldn’t take the heat anymore and went riding around town in their car just so they could sit somewhere air conditioned for a few minutes and cool off. Several of my girlfriends texted me to say their husbands and kids were driving them nuts. One said she would rather take a direct hit from the lightening during the storm than be locked up indoors for one more day.

“If I don’t get out of my house soon, the police might have to come over to recover my husband’s dead body,” one friend told me over the phone. “He is getting on my nerves!”

I, too, was suffering from a severe case of cabin fever. I was so bored. I began getting headaches from sleeping so much, and I think I tore through my week-long supply of storm rations in the first two days because there was nothing else to do but eat. I established a bit of a routine, which entailed taking turns eating a snack and napping every two hours. By the end of the three-day weekend, my pants had gotten a little tighter. By the time Sunday afternoon rolled around, I was itching to go back to work and return to normalcy.

I was a baby when Hurricane ‘Iwa hit Hawai‘i and in middle school for ‘Iniki. Those two storms were devastating — they had a catastrophic impact on many local families and towns. On Läna‘i, we were fortunate that we did not feel any major effects from Iselle and Julio, but many others on Maui and Hawai‘i island weren’t so lucky. My heart goes out to them.

Whenever these types of major weather conditions threaten the state, it always brings out the best and the worst in people. On one hand, you have some nasty, aggressive people at stores, shoving each other and pushing to the front of the line to grab the last two cases of water. But you also have neighbors who bring over rope to help you tie down your outside patio furniture to brace against strong winds, and strangers helping the elderly carry heavy cases of canned goods from the store to their car . . . just because. Love that about local people.

Hurricane season isn’t over for a few more months, so we’re not in the clear just yet. At least if another storm is forecast, I won’t have to fight the crowds at the store because I already stocked up on my canned goods and butane fuel, and I’ll be sure to buy batteries on sale the next time I’m in Honolulu.

Shara Enay Birbirsa resides on the island of Läna‘i, where she is Pülama Läna‘i’s liaison with the island’s community. Shara is a former writer for The Hawai‘i Herald and Hawai‘i Business magazine. She has been writing this Drama Queen Journals column since 2006. 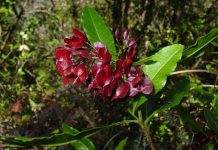 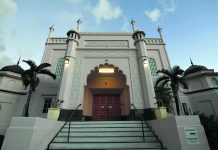