By Grant “Sandaa” Murata, Special to The Hawai’i Herald

Okinawan music has enjoyed an unbelievable surge in popularity over the past 30 years. I think it’s the result of many factors — growing interest in Okinawa itself and the many mainland Japan television networks producing dramas set in Okinawa featuring the Ryükyü Islands and their rich culture. Add to that the increasing popularity of Okinawan music.

Traditional Ryükyü minyö, or Okinawan folk music, has been growing in popularity due to the unique sound of the Okinawan sanshin, which is different from the Japanese shamisen. In order to keep up with the demand, several sanshin shops have opened “sanshin factories” in nearby Southeast Asia. A factory enables retailers to manufacture sanshin at a lower labor cost, making it affordable for many people to own a sanshin, just as many of us in Hawai‘i have an ‘ukulele in our homes.

World War II and the Battle of Okinawa, where the only land invasion of Japan took place, left Okinawa and its people in ruins. For many Uchinanchu, it was the music and the dances of the Ryükyüs that lifted them up and helped them overcome their feelings of despair. At the forefront of this movement was the man revered as “the father of Ryükyü minyö” — Shoyei KIna.

Shoukichi Kina also composed many new tunes, giving birth to a new trend in Okinawan music. The lively “Haisai Ojisan,” “Agarizachi” and “Bashamucha-suncha-” were among his early compositions. One of Kina’s recent and most popular modern compositions is the song “Hana,” a song for peace that has been translated into more than seven languages and is sung all around the world. I don’t think it would be an understatement to refer to him as “the father of modern and pop music” in Okinawa today.

Okinawan music has seen many changes since the 1970s. Mainland Japanese musicians have composed hit songs that incorporate the Okinawan music scale and even Okinawan lyrics. It is not unusual for Okinawan, mainland Japanese, American and Hawaiian musicians to collaborate on hit recording projects. Groups like “Begin,” who performed at the Waikiki Shell a few months ago, “The Boom,” “Rinken Band” and the Okinawan-Peruvian group called “Diamantes” have become famous for their Okinawan-influenced music.

“Diamantes” is led by Alberto Shiroma, a Peruvian-born sansei Uchinanchu. Shiroma had a role in inventing and helping to develop a new and fascinating three-stringed instrument that I think will grow in popularity, especially here in Hawai‘i. That instrument is the Sanlele.

The Sanlele was born in Keejoo Ya (pronounced Kayjö-ya), a sanshin shop located in Yomitan, Okinawa. The shop is owned and operated by the Machida brothers, who specialize in designing and crafting high-quality — and high-end — sanshin. The Machidas are sanshin craftsmen in their own right, but they also have ties to various musicians and ‘ukukele craftsmen in mainland Japan.

On one of his visits to the Machidas, Alberto Shiroma of the Diamantes inquired about the possibility of developing an instrument that blended the soft, melodic sounds of an ‘ukulele with a fret board (like that of an ‘ukulele or a guitar) with a sanshin.

Shiroma and the Machidas brainstormed over the design of this dream instrument. When they had a blueprint, the Machida brothers formed a joint venture with T’s Guitars, a mainland Japan company, which would handle the actual manufacturing of the instrument. T’s Guitars is owned by Shinji Takahashi of Nagano, Japan, who is highly regarded as a guitar and ‘ukulele maker.

In order to access good-quality materials, the Machida brothers set up another business, Machida Corp., in Honolulu. After 10 years of experimenting and numerous trials and errors, the perfected Sanlele was unveiled on Feb. 14, 2008.

A year later, I saw a YouTube video of a good friend of mine, Koyei Tsuha of Okinawa, playing the Sanlele. It piqued my curiosity, and I hinted to my wife Chikako, an avid musician herself, that I would really like to try playing a Sanlele if I could get my hands on one. So, on her next trip to Okinawa, she surprised me by buying one. At the time, a case for the instrument hadn’t yet been manufactured, so she brought it back in a cardboard box. I still haven’t found a case for it, so five years later, it’s still stored in the cardboard box.

But it is a magnificent instrument. The body is made of high-quality mahogany and the fingerboard (where the frets are) and bridge are fashioned from rosewood. My Sanlele has traditional karakui, or what is called muudii in Uchinaaguchi (Okinawan language). These are the traditional sanshin tuning pegs that are made from ebony, which is used to make the muudii for the snakeskin sanshin. When I checked the internet, I found that the Sanlele’s muudii can now be purchased with regular western tuning pegs, which makes the instrument resemble an ‘ukulele, but with only three strings.

The Sanlele uses nylon strings that seem to be a bit sturdier than ‘ukulele strings. The body is 63 cm (just over 24 inches in length) and weighs less than a pound. The Sanlele has 16 frets that are spaced out so that the musician can play the instrument like a regular sanshin and is able to match the tone and pitch of the sanshin. The Sanlele comes in two styles — the traditional gourd shape and the pineapple shape with either Karakui or regular tuning pegs.

I would describe the Sanlele’s sound as soft and melodic, much like an ‘ukulele. It is a great companion instrument to the sanshin for the right kind of song, but not for every song. I would not suggest using the Sanlele for koten, or classical, music, but for Ryükyü minyö and newer Okinawa music compositions, the Sanlele is a great addition.

I don’t know how many other Okinawan musicians in Hawai‘i have a Sanlele, as I haven’t seen others incorporate it in their performances in Hawai‘i. I have been experimenting with mine since my wife bought it for me in 2009.

One person who immediately took to the Sanlele is my stepdaughter Marlene Shimamura, who plays sanshin and is also an avid guitarist and bass player. While practicing for this past July’s Hawaii United Okinawa Association Legacy Awards banquet, Marlene tried playing the Sanlele for the first time. She fell in love with it immediately and decided to play the Sanlele instead of the sanshin or guitar for our performance. Because she is accustomed to playing with a fretted instrument and with playing chords, she took to the Sanlele like a natural and was able to improvise while performing.

Other recently invented stringed instruments like the Ichigo ichi e have grown in popularity in recent years. The Sanlele has taken longer to catch on, in Okinawa as well as in other parts of the world. Even in Okinawa, one doesn’t see many Okinawan music enthusiasts using the Sanlele. I wonder — could it be that it is too much like a sanshin? Or, perhaps, too much like an ‘ukulele? One can only guess.

I would like to use the Sanlele for jo-uta (songs of sadness), or true shimauta (island songs) types of Ryükyü minyö songs — those traditional love songs that seem to wail from your heart, songs that were sung late at night to lure your lover out for a rendezvous. I think those kinds of songs are ideal for the Sanlele, especially as a solo instrument.

I haven’t attempted to use a capo on my Sanlele. The capo is the device placed on the neck of stringed instruments, usually fretted, to shorten the playable length of the strings, thus raising the pitch on the Sanlele. People who like singing at a higher pitch should think twice about using the Sanlele because the strings cannot be raised too high or they will break.

Personally, I really like my Sanlele and will definitely try to include it in more of my performances. Having said that, I must admit I am still a true, blue sanshin player. SANSHIN FOREVER!!!!

In spite of that, I treasure my Sanlele, so I took it to Goodguys Music & Sound on Kapahulu Avenue to see if I could find a case for it. The owner of the shop looked it over and said it was a well-made instrument and that he was impressed with the craftsmanship. We agreed that it was, in many respects, a work of art — definitely not an instrument you would take to the beach and bring out for a casual singalong.

Although it is a beautiful instrument, the $900 (U.S.) Chikako paid seemed a bit steep to me. Personally, I would have used that $900 as a down payment for a traditional Kuruchi-wood sanshin. Note that I said a “down payment,” because no “decent” sanshin can be bought for $900.

But in Hawai‘i, the land where hapa is a way of life, the marriage of sanshin and ‘ukulele has produced Sanlele, their precious and happy musical child.

Grant “Sandaa” Murata, a Hawai‘i-born sansei, is shihan (master instructor) and chapter president of the Afuso-ryu Gensei Kai Hawaii Shibu. He has been playing sanshin for nearly four decades. 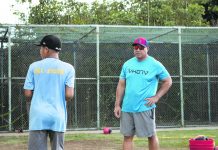 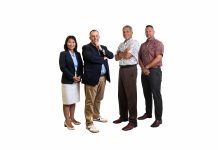