“Osozaki no Himawari (Late Blooming Sunflower),” premieres on Monday, Sept. 1, at 7:35 p.m.
A story of seven young adults living their ordinary days near the Shimanto river of Kochi prefecture, renowned as the last of the crystal clear streams. Jotaro has recently been laid off from work and around the same time his girlfriend of seven years dumps him. He then finds an online website that is recruiting volunteers for the revitalization of Shimanto city. Without much thought, he desperately jumps at the opportunity and finds himself in the middle of Kochi, where nature is grand and time is of abundance. Fully subtitled in English.

“Boku no Ita Jikan (The Hours),” premieres on Wednesday, Sept. 3, at
7:35 p.m.
Fourth-year university student Takuto Sawada is having a tough time looking for a job. The eldest son of the director of a hospital, his parents had expected him to become a doctor, but they shift their focus to their younger son, Rikuto. Although Takuto is popular amongst his peers and females, he avoids deeper emotional ties due to many inner insecurities. One day, Takuto learns he is suffering from ALS (Lou Gehrig’s disease) an incurable, neurodegenerative disease, and doesn’t have much time left to live. Takuto, who had given only vague thoughts to his goals in life, starts to explore what is left of his life and live with a positive attitude. Fully subtitled in English. 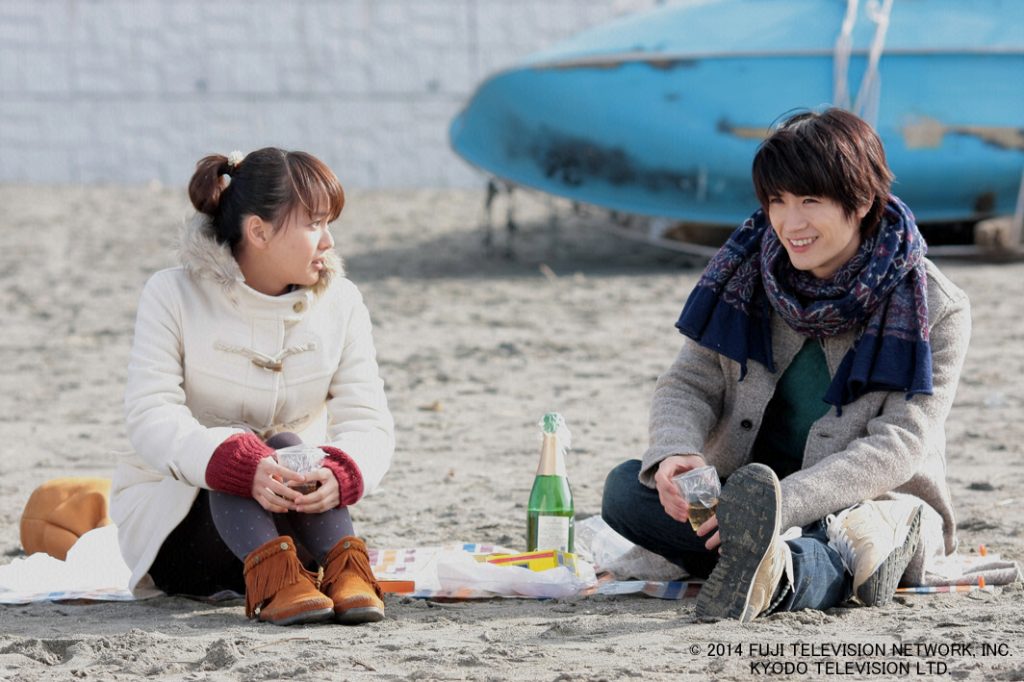 “Shinigami-kun (Angel of Death),” premieres on Friday, Sept. 5, at 7:35 p.m.
Shinigami-kun, grim reaper No. 413, is a rookie who pronounces the death of those scheduled to die and brings souls to the nether world. He would appear with the signature phrase “Congratulations! I’m here to call on you” although it is hard to say how this can be a happy occasion, and watch over the dying. To a grim reaper, persuading people attempting to commit suicide and preventing unforeseen deaths is also an important task. But because Shinigami-kun is new to this grim reaper work, he has a tendency to lean towards humans in his judgments, break the rules and get reprimanded by his superior.
Starring Satoshi Ohno of “Arashi.” Fully subtitled in English.

“Railways – Ai o Tsutaerarenai Otonatachi e (Crossroads),” premieres on Saturday, Sept. 6, at 7:35 p.m.
Railway driver Toru Takishima has devoted himself to his work every day, but now he is 59 years old and has only a month to go till retirement. One day, his wife Sawako who has always supported him as a faithful housewife, declares that she will work again as a nurse. Toru doesn’t understand her desire to go back to work. They argue over the matter and Sawako leaves their home and later asks for a divorce. This emotionally inspiring film is for all those standing at that crossroads of life. Fully subtitled in English.

NGN 3 MOVIE CHANNEL (Digital Ch. 679)
Premiere titles air on Friday. Movies are shown at various times. Check your digital on-screen guide for movie schedules, using either the GUIDE or INFO buttons (up to one week ahead). Or call NGN, Mon.-Fri. from 9 a.m. to 6 p.m. at 538-1966 for inquiries or to request an e-mail of NGN 3 programming information. All movies are in Japanese language with full English subtitles.

Sept. 5: “Juichinin no Samurai (Eleven Samurai),” 1967 jidaigeki, 1 hour and 30 minutes.
Directed by Eiichi Kudo. Starring Kotaro Satomi and Isao Natsuyagi.
The lord of the Oshi fief is killed by his trespassing neighbor, the cruel and despotic Nariatsu, son of the former Shogun. After a biased investigation, the Oshi clan is blamed for what happened and sentenced to be disbanded. Eleven of the best samurai of the clan refuse the sentence and seek justice.

Sept. 12: “Nihon no Don Kanketsu-hen (Japan’s Don Emerges),” 1978 action film, 2 hours and 11 minutes.
Directed by Sadao Nakajima. Starring Toshiro Mifune and Chiezo Kataoka.
Doublecrosses and backstabbings are evident while the biggest yakuza bosses battle for the title of “Godfather of Japan” between eastern and western families. A violent story featuring an all-star cast. This movie is a must-see!

Sept. 19: “Mottomo Kiken na Yugi (The Most Dangerous Game),” 1978 action film, 1 hour and 30 minutes.
Directed by Toru Murakawa. Starring Yusaku Matsuda and Renji Ishibashi.
Shohei Narumi is an assassin. He is hired to recover a kidnap victim who is an influential figure of the financial world. After a gun battle he recovers the kidnap victim, only for the victim to be killed. He challenges a plot of the business world alone and fights a valiant battle.

NGN3 MOVIE OF THE MONTH

“LOVE Masao-kun ga Iku! (Go, Masao!),” 2012 comedy/drama, 1 hour and 49 minutes.
Directed by Kentaro Otani. Starring Shingo Katori and Ryoko Hirosue.
Hideki, a struggling comedian is initially overjoyed when he’s invited to appear on a pet-themed variety show starring a goofy dog Masao-kun. Unfortunately, his luck quickly takes a turn for the worse Masao proves nearly impossible to handle. However, his attitude changes one day when he’s injured during filming and Masao immediately rushes to aid him. After that incident, Hideki decides to form a permanent duo with Masao.

“Bazoku Yakuza (Yakuza on Horseback),” 1968 action film, 1 hour and 31 minutes.
Directed by Ozawa Shigehiro. Starring Koji
Tsuruta and Hiroki Matsukata.
A story of fearless horsemen in the open spaces of Manchuria. Koji Tsuruta stars as a gangster who serves in the cavalry and who fights an enemy with a Chinese sword.

“Gang Chushingura (Gang Loyalty and Vengeance),” 1963 action film, 1 hour and 33 minutes.
Directed by Shigehiro Ozawa, with an all-star cast.
A modern gang version of Chushingura, chronicling almost scene for scene the Brave 47 Ronin story, transposed from the Genroku Period to the Showa Era.

“Heso Mori,” 2012 drama, 1 hour and 42 minutes.
Starring Toshiyuki Nagashima and Ikkei Watanabe.
Five young friends discover a network of time travelling tunnels that take them to different eras in Japan. Forty years later, Satoshi runs the traditional paper mill of the village and struggles to make ends meet. Strange things start to happen when a nefarious developer with connections to the tunnels swoops in and makes the region a tourist spot. Satoshi and friends are called into action as guardians of the tunnels when the developer discovers a samurai who wanders in from another era.

“Hokuriku Dairi Senso (The Shadow War of the Yakuza),” 1977 action film,
1 hour and 38 minutes.
Directed by Kinji Fukasaku. Starring Hiroki Matsukata and Sonny Chiba.
The fight between a local small gang and the biggest family. In the setting of the Hokuriku region, where the snow and cold winds rage, battles among yakuza who value land over tradition are shown. Noboru Kawada uses any measure for survival, disregarding parents, brothers, and tradition.

“Kobanzame Oyakusha Jingi (Actress Vs. Greedy Sharks),” 1966 jidaigeki, 1 hour and 30 minutes.
Directed by Tadashi Sawasima. Starring Hibari Misora, Yoichi Hayashi, Shindo Eitaro and Nogawa Yumiko.
Framed by his enemies, Manbe finds himself imprisoned for a murder he didn’t commit. His only hope lies with his daughter Yuki who takes it upon herself to clear his name.

“Kon-shin,” 2012 drama, 2 hour and 14 minutes.
Directed by Yoshinari Nishikiori. Starring Sho Aoyagi and Ayumi Ito.
Hideaki reluctantly returns to his hometown of Okinoshima and remarries Tamiko, causing a rift with his motherless young daughter. He throws himself into training with the local sumo stable, gradually earning the respect of the once-estranged townspeople. He gets selected for the coveted Ozeki position in the upcoming tournament. Preparing for the big championship, which is held every 20 years at Mizuwakasu Temple, the challenge becomes overwhelming, and the bond of his family and friends on the island support him as he steps into the final competition.

“Mabuta no Haha (In Search of Mother),” 1962 jidaigeki, 1 hour and 23 minutes.
Directed by Tai Kato. Starring Kinnosuke Nakamura, Hiroki Matsukata and Michiyo Kogure.
A wandering gambler Chutaro travels throughout the country in search of his mother who abandoned him when he was 5 years old.

“Morgan Keibu to Nazo no Otoko (Officer Morgan and a Man of Mystery),” 1961 action film, 1 hour and 27 minutes.
Directed by Hideo Sekikawa. Starring John Bromfield and Koji Tsuruta.
Detective Morgan and the Japanese police cooperate to unveil the truth of the mysterious death of Morgan’s friend in Arizona.

“Shorinji Kenpo (The Killing Machine),” 1975 action film, 1 hour and 27 minutes.
Directed by Norihumi Suzuki. Starring Sonny Chiba and Yutaka Nakajima.
“Mr Soh”, who is based on the true life founder of Shorinji Kempo, devotes himself to spreading the arts. A righteous man with a cold stare and fists of steel, he returns to a lawless post-war Japan from Manchuria in 1946. He protects the weak, defends the poor and knocks some good sense into friends and enemies alike.

“Toyama no Kinsan Gozonji Irezumi Hangan (Official with a Tattoo),” 1960 jidaigeki, 1 hour and 34 minutes.
Directed by Yasushi Sasaki. Starring Chiezo Kataoka and Satomi Oka.
Kinnosuke of Toyama sets out on a private mission to clear his father’s name for a crime he did not commit.

“Truck Yarou Goiken Muyo (Truck Rascals: No One Can Stop Me),” 1975 action/drama, 1 hour and 38 minutes.
Directed by Norifumi Suzuki. Starring Bunta Sugawara and Kinya Aikawa.
The first of many movies featuring the lighthearted adventures of two truck drivers. Tojiro and his best friend Kinjo take to the road on their cargo trucks impressing each other with their skills in driving fast and evading the police while transporting commodities throughout the country. Chance encounters with people along the way help them to come to terms with events clouding their past and offer them a shot at redemption.

“Ukyounosuke Junsatsuki (On Patrol),” 1963 samurai film, 1 hour and 32 minutes.
Directed by Yasuto Hasegawa. Starring Hashizo Okawa, Kikuko Hojo and Shiro Osaka.
Following the assassination of his father, the orphan Ukyou is raised by a group of ninja. Desperate for justice, he learns the art of ninjutsu in hopes of one day avenging his father’s death.