“Mysteries of Asia,” premieres Sunday, June 1, at 9 p.m.
Asia is a mix of ancient cultures and fast-growing technology. This program explores cities across Asia, visiting famous landmarks and the hot new nightspots.

“Midnight Ferris Wheel,” premieres Monday, June 2, at 8 p.m.
A drama about three families who live in an upscale neighborhood. On the surface, it appears they have attained wealth and happiness, but trouble brews behind closed doors.

“The Inner Chamber,” premieres Tuesday, June 10, at 9 p.m.
During the Edo period under the rule of Tokugawa Iemitsu, an epidemic affecting only men and boys dramatically decreased the male population to one fourth that of females. Shogun Iemitsu falls ill and dies. The head lady, Kasuga no Tsubone is concerned about the future of the Tokugawa family and begins training a girl to become the next Shogun.

Mystery Theater airs on Wednesday at 8 p.m.; repeats Thursday at noon.
June 4: “Fatal Photo.” A newspaper photo taken immediately after a car accident wins a journalism award for a photographer. But the photo holds far more significance for a retired detective whose daughter is the woman shown in the photo who died in the accident. The detective begins a search for the photographer, who was the sole witness of the accident and clues to the events leading up to his daughter’s tragic death.
June 11: “Reset.” Three friends from high school reflect on their lives in their 40’s. Did they marry the right person? Are they in the right job? Would they make the same life choices if they had the opportunity to relive their lives all over again? They are given the chance to find out when a youthful popular idol from their class invites them to a meeting at a restaurant called “Time” and offers them a chance to go back to when they were 17-years-old and “reset” their lives.
June 18 and 25 (two parts): “Farthest Galaxy.” Detective Seiichiro Watari is nearing retirement, but is still bothered by an unsolved case from seven years ago when the decomposed corpse of a female was found by a fisherman in the sea of Otaru. The body was never identified so the case was never solved. Three years after his retirement, Watari unexpectedly discovers a clue that may finally solve the case. However, at the same time, he learns he does not have long to live. Although he is no longer on the police force, he puts all his energy into reinvestigating the case, in a race to solve the mystery before he dies.

“Fat Detective,” premieres Thursday, June 5, at 8 p.m.
Taro Hanazawa has been on the police force for 20 years, but while all of the other recruits in his class have been promoted, Taro still works at the neighborhood koban (community police station). It’s not because he’s a bad cop; on the contrary, Taro is an excellent police officer. But Taro weighs nearly 250 pounds, which makes it difficult for him to chase down criminals, and even harder for his superiors to take him seriously. That is, until Chief of Investigation First Division Reiko Nishikori observes Taro’s keen police skills in action and taps him to join her squad. Will Taro be able to keep up with the other detectives? Or will his investigative skills leave the other detectives chasing after him?

“Mr. Son-in-Law,” premieres Monday, June 30, at 9 p.m.
After the death of his father-in-law, Hiromasa Akiyoshi is forced to run as mayor by his mother-in-law Otome. He does not welcome fights and finds happiness in an ordinary life and initially refuses to enter the election. However, with the support of his wife Mari and other people around them, he eventually resigns himself to the decision to run.

“Broken Vow (Filipino drama),” Sunday at 5 p.m.
Roberto Sebastian falls in love with a country girl, Melissa Santiago. On their wedding day, Roberto learns Melissa was raped and is now pregnant. He cannot live with this, so he abandons her. With her perfect world shattered, Melissa attempts to take her own life only to be saved by Felix Castro. Their love blooms and Felix vows to win Melissa’s trust. But Roberto contemplates reuniting with Melissa. Will she give him a second chance?

“Losing Heaven” (Filipino drama w/ English subtitles), Sunday at 6 p.m.
Ellery and Bridgitte have been best friends since childhood. The best friends become sisters when Bridgitte’s parents die and she is adopted by Ellery’s dad. Their lives and relationship as best friends/sisters continue until Jonas enters their lives.
Starring Carla Abellana, Michelle Madrigal and Mike Tan.

“Strategist Kanbe,” Sunday at 7 p.m.; Tuesday at 8 p.m.
The 2014 Taiga drama, “Strategist Kanbe,” is about the life story of Yoshitaka Kuroda, otherwise known as Kanbei Kuroda, who was the chief strategist for Hideyoshi Toyotomi. Yoshitaka was born on Dec. 22, 1546, and was a daimyo (lord) during the late Sengoku through early Edo periods. (The Sengoku period is often referred to as the warring period and was a time of great social, political and military upheaval.) Kanbe was a brilliant military strategist and faithful to Toyotomi.

“Pintokona,” Sunday at 8 p.m.
Kyonosuke Kawamura comes from the prominent Kijima kabuki family. He has the looks, voice and stature which have earned him the name “Prince of Kabuki.” But the one thing he doesn’t have is the passion for kabuki.
Ichiya Sawayama, on the other hand, was born into a family totally unrelated to the Kabuki world. While he has talent, passion, and discipline, his only hope of becoming the head of a Kabuki family is to marry into one. Coincidentally, his teacher, Sakugoro Sawayama, the head of another prominent Kabuki family, has a daughter who is in love with Ichiya.
But 10 years ago, Ichiya made a promise to another woman, Ayame Chiba. One day, Ayame attends a weak performance given by Kyonosuke and her disgust for him causes her to shout angrily for a refund. Kyonosuke meets Ayame and begins to fall in love with her.
How will this Kabuki triangle end?

“Doctor X 2,” Monday at 9 p.m.
Season 2! Michiko Daimon is a freelance doctor who was dispatched to a university hospital who lost a number of doctors all at once due to harsh work conditions.

“Partners 10,” airs Thursday at 9 p.m.
Season 10 is here! The Special Mission Task Team sounds more important than it is. Positioned in the lowest section of the Metropolitan Police Department, it is headed by Ukyo Sugishita. Co-workers have nicknamed Ukyo “the gravekeeper of human resources” because it appears that anyone who works under Ukyo eventually leaves the office. However, the other reason for this name is that when Ukyo first transferred to this section, all of his direct reports somehow died mysteriously.
Starring Yutaka Mizutani as the calm, meticulous elder partner who plays Detective Ukyo Sugishita.

“Ultraman Leo,” Friday at 6:30 p.m.
In the tradition of “Kikaida,” KIKU-TV brings sci-fi, live-action hero drama back to Hawai‘i television! “Ultraman Leo” was produced and first aired in the mid-1970s, and was the seventh show in the Ultra series about warriors from other planets who help defend Earth against monsters and alien invaders.

“Mission to Kill (Hissatsu Shigotonin),” Friday at 8 p.m.
Shigotonin refers to a team of hired assassins. In this samurai drama consisting of multiple series and specials, police are left to unravel crimes committed by hired assassins. What becomes obvious is that the real criminals are not just the assassins, but the people who hired them.

“Japan’s Local Secrets,” Friday at 9 p.m.
Although Japan is a relatively small country geographically, each prefecture has its own traditions, dialects, and . . . foods!!! This program takes us to the secret places throughout Japan known to the people of the area and introduces us to things unique to each place. 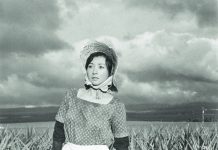 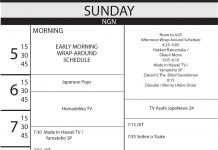