The JACL is holding a special event this weekend. They are honoring three important individuals with their Distinguished Service Award: Robert K. Bratt, Betsy Young and Jane Kurahara.

Bratt was the first director of the Office of Redress Administration after Congress passed the landmark reparations bill. He demonstrated great compassion and a tireless commitment to ensure that all Hawaii internees and evacuees received justice and an apology from the President of the United States and $20,000 redress.

Young and Kurahara are long time volunteers of the Japanese Cultural Center of Hawaii and co-managed the Resource Center. Their pioneering vision and dedication to preserving the Honouliuli site and educating the community about Hawaii’s internment story culminated in the historic Honouliuli pilgrimage and summit on March 2, 2008.

The event takes place this Saturday from 11 a.m. to 2 p.m. at the Japanese Cultural Center of Hawaii’s 5th Floor Manoa Ballroom. Tickets are $30 for JACL members/seniors and $40 for non-members. Table sponsorships are available. For more information, call Shawn Benton at 808-523-8464, email slmbenton@gmail.com or go to http://www.jaclhawaii.org 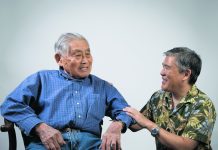