Professor Albert Heck from Utrecht University in the Netherlands has discovered that the enzyme from the Japanese mushroom Grifola frondosa can help the study of diseases such as cancer and diabetes.

This article in Science Daily outlines the enzyme’s importance in identifying proteins in various organisms. There’s a lot of scientific mumbo-jumbo in the story, but here is the gist of the breakthrough:

Proteins play a critical role in disease and growth processes of humans, animals and plants. Identification was previously only possible when the genetic composition of the organism in question was known. Thanks to Heck’s discovery, this is now a thing of the past. Heck used an enzyme from the Japanese mushroom Grifola frondosa to identify proteins.

This makes it possible to study the proteins of an organism of which the genetic composition is – as yet – unknown (e.g. exotic animal species). In addition, research into proteins responsible for such diseases as cancer and diabetes, which usually undergo modification as a result, is much more effective. 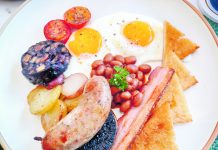