Last week the Japanese Cultural Center of Hawaii hosted a DVD Release Screening of the 2005 film Only the Brave, starring Lane Nishikawa, Jason Scott Lee and the late Pat Morita at the Hawaii Theatre. The film centers around Jimmy Takata, a Wahiawa native, played by Nishikawa, who leads the 100 Infantry Battalion/442nd Regimental Combat Team to save a platoon of Texans trapped deep in a German forest. Takata survives the war but is haunted by a series of flashbacks as he remembers his combat exploits and the prewar lives of his soldiers.

Many of the actors made an appearance at the event, including writer/director Nishikawa, who spoke about the ambitious task of financing and creating the film. The Hawaii Herald was in attendance and made sure to document the festivities.

There was a huge turnout for one of the rare chances to see a movie at the Hawaii Theatre. An Only the Brave poster took center stage in the V.I.P. room.

DVDs were available for purchase at the event.

V.I.P. guests had to chance to do some mingling before the show started.

And, of course, some fantastic food was provided.

The stars of the movie were on-hand before and after the show to sign autographs. Jason Scott Lee (right) poses with 442nd veteran Bert Nishimura, who used to talk pidgeon over the radio during WWII to confuse anyone who might be listening. 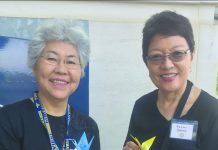