The Register-Guard writes that in early April, 19 former UO students – at least 9 of whom are still alive – will receive honorary degrees from the school. The students had their education cut short by Executive Order 9066, which forced them to be removed from the school in 1942.

The idea blossomed when the state Legislature last year approved a bill giving Oregon universities authority to grant degrees to students who were unable to graduate in 1942 due to being sent to an internment camp. UO officials were so enthusiastic about the idea that they decided the degrees should go to any Japanese-American student forced to leave campus, regardless of whether theywere ever forced into a camp.

[S]tudents working with UO film professor Dan Miller hope to record the Japanese-American elders’ oral histories and create a short documentary about their time at the UO and subsequent lives. The plan is to have the documentary ready for broadcast in time for spring commencement in June.

Who knows, maybe the socially-conscious actions of UO and UW will spark a new trend among universities who had students of Japanese ancestry removed on account of Executive Order 9066. Until then, congratulations to the graduating class of 2008, you earned it!

And if you haven’t already picked up your copy of the Herald, be sure to check out Kevin Kawamoto’s in-depth look into the experience of undergraduate students who were forced out of school in our current issue. 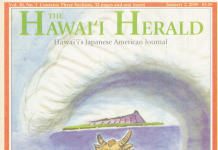 Nengajo – WELCOME THE “YEAR OF THE OX”